My first gun. Where to begin? Because of my age, it couldn’t be a handgun. Thanks to a low tolerance for PITA parties and ongoing RTFM issues, it had to be reliable. Money? Money was too tight to mention (although I just did). I eventually put the Smith &Wesson M&P15-22 in my sights. Friends who owned the cheap-to-fire .22 caliber AR sang its praises like Maxim describing Bar Rafaeli . . .

Before pulling the trigger on the rimfire AR, I commuted to my local gun store for extended fondling and familiarity. I boned-up online, and then researched the gun in a farrago of forums, YouTube videos, review sites and official websites. I put my cash down and picked up my M&P15-22 after a mandatory two-day wait.

The 15-22 made it home unmolested. You know those cool Springfield XD cases that remind you of a spy movie? The 15-22’s cardboard box goes completely the other way. It has that Sam’s Club “pile ’em high and sell ’em cheap” vibe; which is no bad thing provided the gun does what it’s supposed to do. NRA come-on, manual, laughable lock, 25-round mag, gun. Now how much would you pay? Wait! Don’t answer . . .

Thanks to the United States Air Force (your tax money hard at work) the AR platform and I are BFFs. The 5.5 pound Smith & Wesson M&P15-22 is slightly lighter than a 5.56 M4 but not so light that you wonder if the Smith is the “nothing” to which the “It’s NERF or nothing” tagline refers. The M&P15-22’s polymer construction is solid as you wannabe, with only a slight slight wobble with the stock. [ED: Wobble baby wobble baby wobble.]

In my case the 15-22 dances with an A1-Style compensator (1/2 x 28″ thread). If that’s not for you, you can compensate for the compensator with a variety of aftermarket attachments. How about a suppressor that make the 15-22 quieter than a mute librarian? Just don’t forget to say hello to the ATF. The Smith & Wesson M&P15-22 comes with adjustable/removable front and rear sights. Like with all railed AR platforms, you can pimp your gun until it’s disappears in doo-dads. Unlike its 5.56 cousins, you can customize your more-or-less recoilless rifle on the cheap. Example given: Airsoft replica red dot/holographic sights. My rifle sports a $80 EOTech knockoff and a $125 quick detach 3x magnifier. Neither loose their zero, even when I’m bump firing.

The 15-22 breaks down like a Diva stuck in the middle of a rainstorm. Remove two pins and the body splits in half. The buffer’s built into the bolt and doesn’t travel into the buffer tube. The trigger assembly is solid. Cleaning the .22 caliber Smith AR is so quick and easy you will actually do it on a regular basis without complaining. The weather: clear with a very light breeze. Ammo: 36 gr, CPHP Federal Ammunition. Target: a 2¼” steel spinning target set out at 50′. After zeroing the M&P’s iron sights benched, I took careful aim and fired a full 25-round magazine. Every round found the target. As you’d expect, recoil was almost as mild as an ant fart (don’t ask me how I know). Follow-up shots were quicker Michael Moore making his first trip to the buffet. Or is that his second? 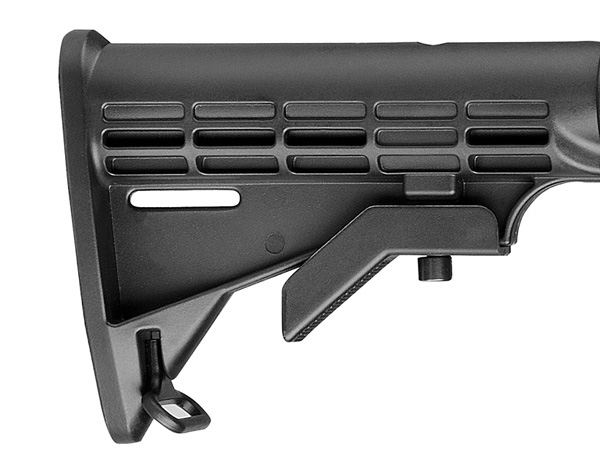 I fired the next few mags standing. I rapid fired five full mags and landed almost every round on steel. I was about 200 rounds in when I had my first series of malfunctions. Over the span of two magazines I had four stovepipes. I had a misfeed two mags later. I attribute the malfs to the 15-22’s break-in period. At the end of a two-hour shooting session I’d shot my way through 550 rounds with only the previously mentioned malfunctions.

Other than that, the rifle ran like a dream. And since then as well. I’ve put another thousand rounds of different ammo brands through the gun without so much as a hiccup. No issues. Nothing.

That’s no small thing. .22 caliber AR’s are notoriously finicky. While there are advantages to the problem: shooters using a .22 AR to train for a full-size firearm get hands-on experience dealing with malfunctions—there’s a limit to how many clicks even the most determined tacticool type wants to hear. The Smith & Wesson M&P15-22 leaps over this bar like Olympic hurdler Lolo Jones jumping over a playa.

Smith & Wesson have come a long, long way in terms of quality control for their AR products; they’ve brought production back in-house to excellent effect. Still, we’re talking about a $450 plastic fantastic—sorry “high strength polymer upper and lower receiver equipped” rimfire AR. A buyer should clean and run their M&P15-22 with a large variety and quantity of ammo to see what works. If problems persist, Smith has terrific customer care. FWIW.

The Smith & Wesson M&P15-22 has exceeded my expectations on all fronts. It’s set the standard for the firearms to follow. Which sucks. How will I ever find another cool-looking firearm that’s so much fun to shoot that doesn’t break the bank in terms of price of entry or running costs? I think I need a bigger income.

Ergonomics:  * * * * *
It’s the little brother of the beloved AR carbine and has all the features of its more powerful sibling. The picatinny rail will accept any of the accessories that make your .223 rifle shoot well.

Reliability: * * * * *
I’ve only had one misfeed and four stovepipe jams in over 1500 rounds. With a .003% fail rate, this rifle definitely maxes out on the reliability scale.