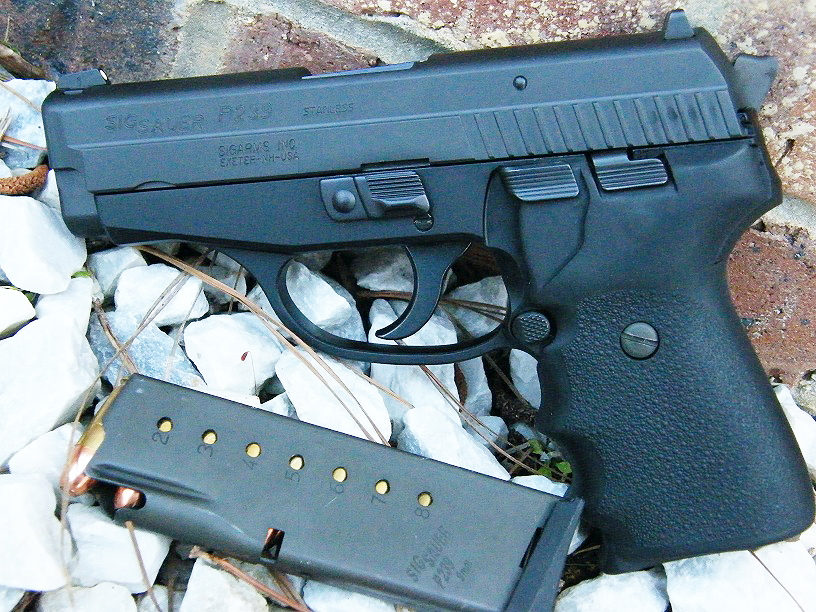 With all the new micro/mini/nano/sub-particle subcompact pistols on the market today one CCW option is continually over-looked – the subcompact. Large enough to soak up the recoil of its full power cartridge, yet small enough to comfortably rest in a Super Tuck holster, the sub-compact is often the best balance of concealability and capacity. A pocket-carry convert, I used to take my little J-frame hammerless wherever I went, and to be honest it’s very convenient. But five shots of .38 special with a two-second reload time doesn’t instill tons of confidence in a shooter. As a result, I jumped to the other side of the spectrum and picked up a Glock model 27. But it printed like a pocket-carried Gideon’s from a sketchy motel . . .

The Glock G27, while substantially larger, somehow managed to give me only a marginal increase in grip real-estate than the aforementioned j-frame sporting boot grips. Feeling discouraged, I traded the G27 for a full-sized G17 to use for home defense and resigned myself to carrying the snubbie .38. Some years later I bought my then-fiancé her first pistol, a SIG SAUER P239. Slim, compact, and smooth, the little SIG automatic afforded her plenty of room for a full two-handed grip with thumbs forward while easily disappearing into a Crossbreed Super Tuck IWB holster. As I slowly opened the iconic blue case, not unlike Dr. Jones, my initial impression of the SIG was that it’s a no-nonsense business gun with the lines of a jet-black 85’ Firebird. In a bit of internet role reversal, the gun enthusiast borrows the novice’s gun and falls in love. Oddly enough, she found she really enjoyed my Colt Gold Cup since she didn’t have a CCW license yet.

After carrying the SIG in generic IWB holster for a few weeks with a shoddy belt, I learned four important lessons; 1) I really enjoy having a spare magazine on me compared to a cumbersome speed loader (or worse yet, an ironically named speed strip), 2) I’m too old to wear my shorts down to my ankles, 3) a proper holster is a must for an all-metal pistol and 4) a good solid belt can work wonders for mitigating the weight of carrying heavier guns. Sporting a matte black finish and a magazine capacity up to 10+1, the SIG P239 not only looks the part of secret service heater, but plays it just as well. I found that in local IDPA-esque scrimmages, I shot consistently as well as I normally do with a full-sized Glock. At 10 yards the plates had better invest in Kevlar protection because they had nowhere to hide. Intrigued by the small gun’s big performance, I decided to shoot it from a rest at 15 yards to get a better idea of how well she’d group. At that distance I could cover my grouping with a silver dollar, and at greater distances, a DGU’s legality would be seriously questionable. At first glance, the Sig P239’s sharp angular edges might appear painful, but the engineers over at Exeter obviously know their stuff. I initially wondered if the gun’s lack of a beavertail would lead to a symptom PPK owners are all too familiar with: slide bite. However, I was pleasantly surprised that despite my 1911-inspired ultra high grip, the SIG’s slide, unlike the little dog of Pink Panther fame, does not bite.

Lest you think the SIG is all bark and no bite, she doesn’t just look pretty and carry well, but also shoots circles around most guns with twice her sight radius/barrel length. While one could argue that such accuracy is unnecessary in a concealed carry piece, (or maybe even detrimental, as it’s usually indicative of tighter tolerances and thus less reliability in harsh conditions) I believe your wife being held as a human shield would beg to differ. However unlikely that situation may be, no one in history has ever complained about being too thin, having too much money, being too good looking or having a gun that’s too damn accurate.

Customizable  * * * *
With a wide variety of both OEM parts and aftermarket grips (check out Hogue’s aluminum grips, freakin’ sweet!) the Sig P239 offers the shooter no shortage of customizability. If that’s a word.

Carry  * * * * ½
While not as light as some of SIG’s more recent offerings, the only downside to this gun are the sharp edges which either a reputable gunsmith or upgrading to the SAS (SIG Anti-Snag) package would remedy.

Overall Rating * * * * *
An easy-shooting all-metal compact piece with accuracy to spare. A standard for other carry guns to live up to.