The number of companies making AR-15 style rifles has exploded in the last couple years. Even some of the bigger names in the industry who had previously avoided the platform are getting in on the action, like Smith & Wesson and Ruger. Now that those companies have an established foothold in the market, it’s only natural that they would want to expand. We saw S&W’s M&P-10 in 7.62 NATO come online at the SHOT Show and now Ruger has gotten into the AR-10 game with their SR-762 offering . . .

Ruger makes some amazing products. Their 10/22, for example, is the gold standard when it comes to rimfire rifles, and Tyler Kee has used a M77 bolt action rifle for hunting ever since I’ve known him. But Ruger hasn’t really made any “new” auto-loading rifles since the Mini-14 came out back in 1973. So it was a huge surprise when they jumped head-first into the AR-15 game with their SR-556 — and an even bigger surprise that it was actually pretty damn good. I had a chance to spend a week in the Arizona desert with it and I can safely say that I had more issues than the gun, thanks in part to the piston system which Ruger used instead of the gas expansion design that’s more common in the AR-15 platform.

Moving from an AR-15 to an AR-10 design should, theoretically, be easy since the AR-15 is simply a scaled down version of its .308 Winchester big brother. But when you’re dealing with that much mass and energy moving around in such a small package, things can go awry. But before we start the gripe fest, let’s go over some of the brilliant points of this design. The SR-762 was designed from the ground up to be a true “battle rifle” — a lightweight, short rifle chambered in the heavy-hitting 7.62 NATO cartridge. In that sense the rifle hits all of the requirements, but also opens it up to a direct comparison to the FNH USA SCAR 17S which fills the same role.

The stock is an adjustable lightweight deal, which seems more at home on the lighter 5.56 NATO cousin but nevertheless works well on the gun. If I were going to buy this rifle I’d probably swap it out for a Magpul PRS stock, but then again that wouldn’t fit with the “battle rifle” mentality. The gun is designed to be light and slick, and for that purpose the stock is perfect — just enough stock without too much weight and bulk added. The castle nut keeping it on the gun is staked in place, and feels solid against the shoulder when firing or moving around. The gun comes with a set of folding iron sights, which look remarkably close to the H&K style sights that are in use on the HK416 these days. I’ve never been that much of a fan, but the sights work fine and do a good job for close range work. If your mission requires you to reach out a little further, the gun features a flat-top upper receiver and a full length Picatinny rail along the top of the handguards for whatever night vision or tactical tomfoolery your heart desires.

While we’re talking about the handguards, they aren’t free floating. The gas block contacts the handguards at the front, which usually means a decrease in accuracy when in non-standard shooting positions. However, I didn’t notice any appreciable shift in the point of impact when I was testing the gun while against a telephone pole or on a window sill. Then again, I was only testing at about 50 yards, so your mileage may vary. But while they aren’t free floating, they are extremely comfortable. The handguards come with some grippy panels that you can attach, but the slick design (without any rails on the sides or bottom) allow you to get your hand around them without any of the usual cheese grater comparisons.

The barrel length is a mere 16 inches, the legal minimum, which saves on weight and allows the gun to be more nimble in the field. The barrel itself is cold hammer forged for a longer useful lifetime, and features a fluted profile under the handguards to lighten the gun and provide more surface area for heat transfer when firing. That short barrel is capped with a Mini-14 style flash hider, which is threaded onto the barrel using a 5/8 – 24 thread. That threading is extremely important for those with silencers who are thinking about getting this rifle. Speaking of silencers, the rifle uses a 2-stage piston system that Ruger touts as being the best in the industry. The regulator is designed so that you can turn it by inserting the tip of a .308 Winchester cartridge in the hole, and the regulator is capable of a number of settings including “off.” This is where it gets nifty for those who are using a silencer, since turning off the gas eliminates the noise of the action moving around and allows you to work the gun as if it were a straight pull bolt action rifle. FYI, for comparison, the SCAR has a “suppressed” setting but that’s it — the gas is either “normal” or “suppressed” with no intermediate positions and no off switch.

I can attest to the ease with which one can tune the gas system, because as soon as I put the gun on the bench and started shooting groups, this happened… The gun short stroked. For whatever reason the gas setting was too restrictive and the bolt carrier wasn’t making it all the way to the back of the magazine to pick up the next round. I turned the regulator one click further open, and the issue never happened again.

The ability to fine tune your gas system is something I really hope to see in more high-end designs. Not everyone runs the same loads, and while the “average” load is fine for the “average” shooter, if you’re dropping a whole chunk of cash on a rifle it’s nice to know that you can make it work no matter what ammo you feed it. And especially for competition shooters, the ability to fine tune the gas system to the point where there’s barely enough force to cycle the action is a huge help in cutting down the felt recoil of the firearm.

Oh, and the gun takes standard PMAGs. Some AR-10 rifles only work with specific magazines, but this gun was designed to use the AR-10 PMAGs and so they work perfectly. That was one of my major gripes about the SCAR 17S (that it only takes FN’s proprietary magazine), and it looks like the SR-762 avoided that issue.

That’s not to say that the SR-762 is perfect, because it isn’t. Going beyond the technical specifications, there’s a few things that need work on this gun. Let’s start with the trigger. It sucks more than almost any other trigger I’ve tested this year. In fact, I think I’d prefer the trigger off the Tavor SAR than this one. This trigger feels like you’re dragging it through a gravel pit, and it’s creepier than a tea party with Bela Lugosi. When you finally get it to the end of its travel, the force required to hit the break is closer to that of a GLOCK than a .308 rifle. The SCAR 17S’ trigger is equally as heavy, but without the accompanying awfulness.

If you buy this gun, I’d recommend replacing the trigger as one of the first things to do. While it may seem like an inconvenience, replacing the trigger should be a snap given the wide availability of replacement triggers for the AR-10 platform. Plus, it’s just as easy as an AR-15 — two pins and you’re done.

Second up on the list o’ gripes is the safety selector switch. Normally as long as it functions I’m happy, but on the example Ruger sent me the safety likes to stop before it is fully disengaged. There’s a point where the safety is almost in the “fire” position (maybe about 75 degrees?), but something about the mechanics of the selector makes you have to force it over a “hump” in the track to rest in the fire position. I took the gun apart trying to figure out what was going on, and my best guess is that the detent for the safety selector is simply too small and is getting hung up on something. A replacement should fix that issue.

Despite these issues, there’s no doubt whatsoever that the gun performs. That target shows six rounds — not five — in about a 2 inch spread at 100 yards. The first four rounds were within the required 1 MoA to make me like the rifle, but then those two rounds dropped into the red and spoiled the fun. I get the feeling that with some proper equipment and a little more patience someone could get some great groups out of the gun, and if I do I’ll update the review.

Shooting the gun is downright pleasant, with the piston system soaking up some of the recoil and making it feel more like a stout 5.56 round going off than a 7.62 NATO round. If the trigger were a bit better, this would be a great range toy and maybe even a good long range gas gun. Not quite a precision system, but it has the makings of a great medium range rifle. 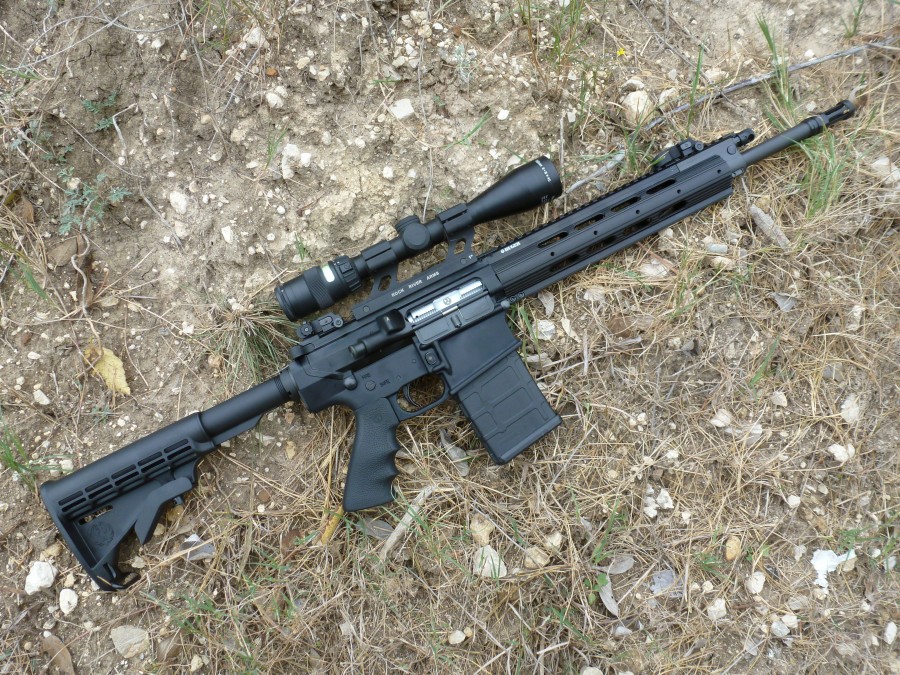 The real question , however, is whether the gun is worth the money. The rifle clocks in at a chunky $2,200, which seems a lot until you start comparing it with the competition.

On the high end, you have the SCAR 17S. Spec for spec, the two rifles have almost the same feature set and seem poised to compete head-to-head. But in this case, Ruger gets the job done for about $800 less and with more parts compatibility and availability. So unless you like the aesthetics of the 17S, the SR-762 seems to be the better choice.

On the lower end is the DPMS 308 Recon giving Ruger a run for its money. With an MSRP of only about $1,560 and many of the same features, it appears to be the better choice. But the DPMS still uses the gas expansion system instead of Ruger’s piston system, and the gas system on the DPMS isn’t tuneable. The handguards are also covered in rails by default, which might be a comfort issue for some people. Some people think that those tweaks are worth the extra cash, and I tend to agree.

In my opinion, the Ruger SR-762 is a rifle that makes a lot of sense. It has some amazing features with excellent performance, but there are just enough little nagging issues to keep it from being “perfect.”

Accuracy: * * * *
It performed well enough, but the non-free-floating barrel gives me some concerns.

Ergonomics: * * * *
I’m not a huge fan of the stock. It just seems unbalanced, like most of the weight is in the front and it wants to tip forward, and it feels a little flimsy to me. Then again, those handguards are great.

Ergonomics Firing: * * *
FIX THE TRIGGER! Please, Ruger, this rifle has so much potential to waste it with a crappy trigger.

Overall Rating: * * * *
It would take some very slight tweaks to make this gun perfect. But even as it is, I’m thinking of sending a check back instead of the gun . . .