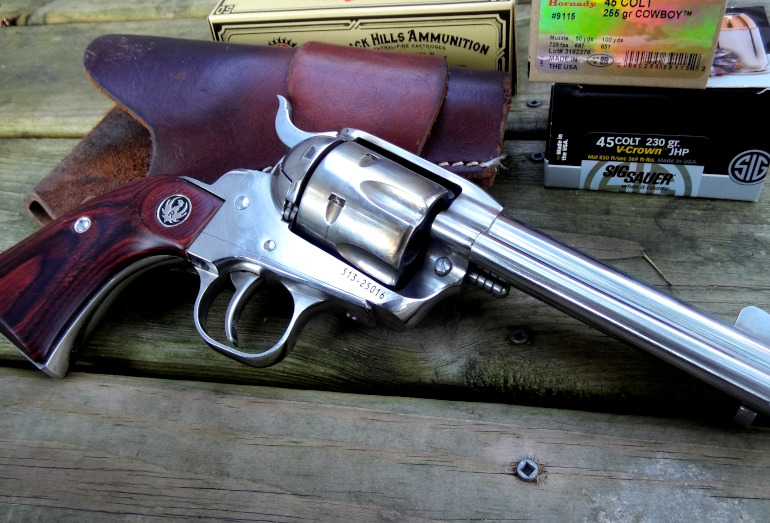 Ruger isn’t a name that’s typically associated with the Wild West. It may have something to do with the fact that Ruger wasn’t around during those days.  That hasn’t stopped them from doing a hell of a job bringing the spirit of yesteryear to today’s shooting scene with multiple lines of guns and now the Ruger New Vaquero.

This review will cover one of Ruger’s most interesting and visually appealing firearms, the New Vaquero in .45 Colt with a 4.62 inch barrel. Ruger also makes one with a 5.0 inch barrel length and two .357 magnum models.

This review will encompass several topics, the first being one that I’ve heard endless debate on. It has been said that the truest and only single action revolver was the one made by Colt and any opinion to the contrary is heresy.

Gun writers sometimes are bullied into crooning over the perfection of the past and aren’t supposed to be critical of the tenants of the culture at large. Worst of all, some even start to believe this nonsense and spread it themselves. The Colt Single Action Army was a legendary gun and attained almost otherworldly status in pop culture. The Ruger New Vaquero isn’t a Colt in any way. It’s visually similar, but it is otherwise a completely different gun in terms of materials, design, and safety.

I’ve heard some say that the Ruger New Vaquero is inferior to the SAA, but that is entirely false. The New Vaquero is nicely finished, benefits from modern materials and construction techniques and is virtually indestructible.

The primary advantage to the New Vaquero is that it has the look and feel of a classic, but the engineering of a modern gun. Ruger has taken what has been learned over the years about the needs and desires of single action shooters.  Bill Ruger’s company has had a long line revolvers based upon the single action frame, from its venerable Ruger Vaquero guns, to the Ruger Blackhawk, Redhawk and Super Blackhawk lines.  And the Ruger Bisley guns too.  The company has applied these lessons in a way that makes tremendous sense.

Unlike other single actions, the new model Vaquero safely holds six rounds with the hammer down. Traditionally, a six-gun was loaded with only five shots, as the firing pin would come to rest on a live primer. That isn’t necessary with the New Vaquero. Traditionalists hate guns with transfer bars in the firing assembly, but the advantage in a single action is undeniable. As far as safety is concerned, the gun is far less likely to have an ‘accidental’ discharge than a comparable SAA. The traditional method for loading required opening the loading gate, putting the hammer at half-cock, and then loading and unloading. The hammer would then have to be manually lowered down on an empty chamber to ensure a safe, loaded gun.

The Ruger New Vaquero doesn’t require touching the hammer to load or unload. Simply open the loading gate and the cylinder is free to spin, allowing easy loading with no risk of a discharge.  Thanks to the transfer bar mechanism. When it comes to durability, the New Vaquero is about as solid and robust as any gun made. The entire thing is constructed of stainless steel. It can fire everything from commercial smokeless powder ammo to blackpowder reloads.

I did not fire blackpowder in my review sample, but I did locate a friend who I knew was reloading such ammo.  He  routinely fired it in his stainless Ruger New Vaquero in local SASS (Single Action Shooting Society) Cowboy Action Shooting matches. His gun looked no dirtier than mine when he showed me and claimed it was just like cleaning any other gun. The utility offered by the simple, elegant stainless is hard to ignore. Unlike nickel plating, stainless will never chip away.

So how does the Vaquero shoot? The short answer is it shoots well, but people unfamiliar with fixed sights on a revolver may find them frustrating or confusing at first. Today we have become used to a gun with adjustable or drift-adjustable sights, but Ruger stayed true to the look and feel of history and went for a notch on the frame for the rear and a fixed blade front sight on the business end.

There’s no way to adjust these sights without gunsmithing or filing. But take care, because once you take material away, it isn’t easy to put back on. 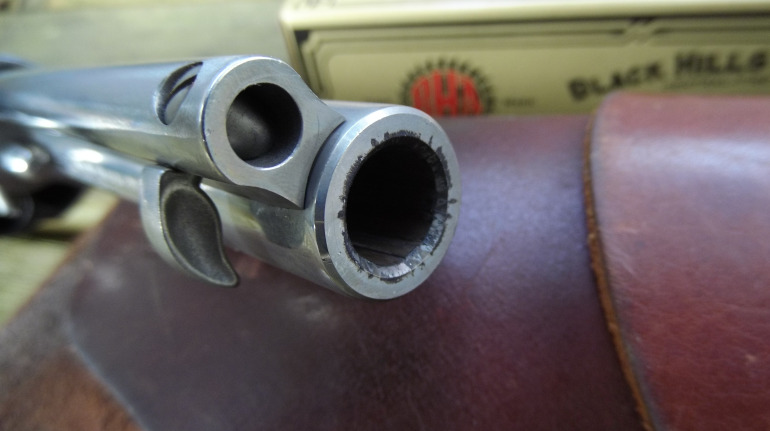 I fired several types of ammo from a variety of manufacturers in the Ruger New Vaquero for both accuracy and velocity over my Oehler 35P chronograph. The different brands I tested all displayed different characteristics as far as bullet type, purpose, and technological sophistication.

Most notably, I tested the most modern, expanding self-defense rounds against the traditional cast lead that the .45 Colt.  Groups below are the average of three five-shot strings at 25 yards from a bench rest.

After I fired for group and velocity, I spent some time getting to know the gun and how it handles with the different types of ammo. The lighter jacketed loads from Hornady and SIG were, predictably, more accurate than their lead counterparts and displayed higher velocity.

That isn’t a surprise, but it’s demonstrative of where technology has taken the .45 Colt cartridge. I wouldn’t hesitate to carry either on the street, although I hesitate to say that I would ever actually carry a gun the size of the New Vaquero as my EDC. 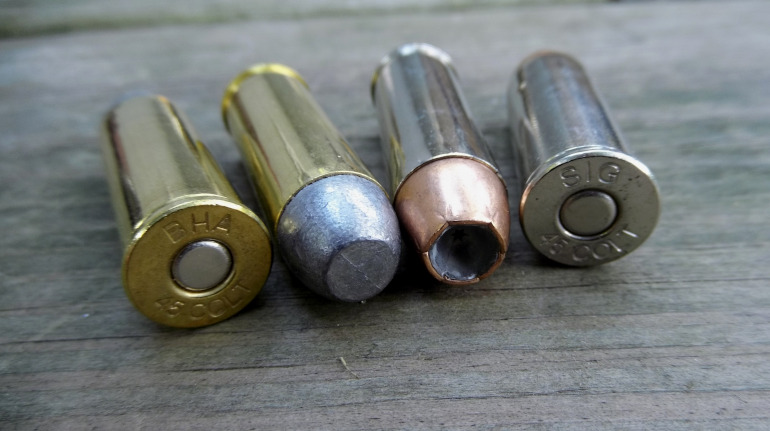 Pitting the three lead offerings against each other revealed that they performed very differently, despite being similar. The Hornady load generated the most smoke of the three, with each round producing a white cloud. It also impacted low and left of aim by about three inches.

The HSM Cowboy load was dissimilar in that it tended to impact high of aim by an inch or so and had the tendency to drift right by another three inches. This load proved the slowest of the five I tested, and the least accurate on paper. It was, however, the softest shooting and easiest to make quick shots. At close range, this load would be ideal for competition.

The load that I spent the most time on was the Black Hills 250gr RNFP. Black Hills was kind enough to send me an entire case of 500 rounds to fire in this gun and I was able to develop a true skill with it. I fired most of this load on steel plates at ranges as close as ten feet out to 100 yards.

It shot true to point of aim at 25 yards, but began to drift a little left at 100 yards. There was a very distinct time between the shot and the impact at those ranges. Look for a more involved review of this ammo to come here soon.

Overall, the Ruger New Vaquero is a very solid, extremely reliable “modern” six-shooter that has all the charm and grace of years past while giving up nothing to other modern revolvers’ safety and performance. The discerning shooter can choose from several models and calibers other than the .45 Colt, but there’s just something so right about those big .45 bullets.

Reliability: * * * * *
No problems whatsoever over the course of over 1,200 rounds and thousands of dry fires.

Ergonomics: * * * * *
The comfortable hardwood grips and good balance make this gun sit naturally in the hand. I would’ve preferred a thicker grip, but my hands aren’t everyone’s and there are aftermarket options for that.

Accuracy: * * * *
It’s a different animal than a modern pistol and this thing isn’t supposed to be a modern plastic fantastic. Find the right load and the New Vaquero performs extremely well.

Customization: * *
There isn’t much that you can do to this gun without the help of a gunsmith. You could change the grips and some springs yourself, but that’s about it.

Handling: * * * * *
The classic design and lines of this gun are some of the most comfortable around. It’s no secret that the single action revolver is easy to shoot and points well, and the New Vaquero is no exception. The gun rolls in the hand with recoil and is a joy to shot.

Overall * * * * 1/2
Ruger did well by every shooter with the New Vaquero. And you don’t have to be a cowboy action shooter to appreciate this wonderfully American revolver. If you want modern benefits and materials with classic spirit, this is your piece.