Ruger’s ultra-popular 10/22 is fun, reliable, handy, fairly accurate and one of the most easy to customize platforms in the gun world. I’ve owned three over the years and always regret selling them. But as I became a more proficient shooter I eventually grew out of the standard 10/22 carbine.

While the standard 10/22 models are certainly accurate enough for training and plinking, it’s far from the kind of hyper accurate rifles that I desire as an adult. So I went without a 10/22 for several years and frequently found myself wishing I still had one. Every time I introduce a new shooter to the sport I find myself wanting a 10/22 I can pull out of the safe. While browsing the racks of one of my local gun stores a gorgeous wood-stocked rifle with a 20-inch barrel caught my wandering eye. I instantly recognized the iconic 10/22 receiver, but the rest of the rifle looked customized. Upon closer inspection I read “10/22 Target” on the barrel. A quick Google session revealed that, among its many variants, Ruger does, in fact, make a Target model. It’s basically a grown-up version of one of the favorite rifles from my youth.

Without spending the time to delve into the specifics I took the rifle home. It was a true “shut up and take my money” situation. 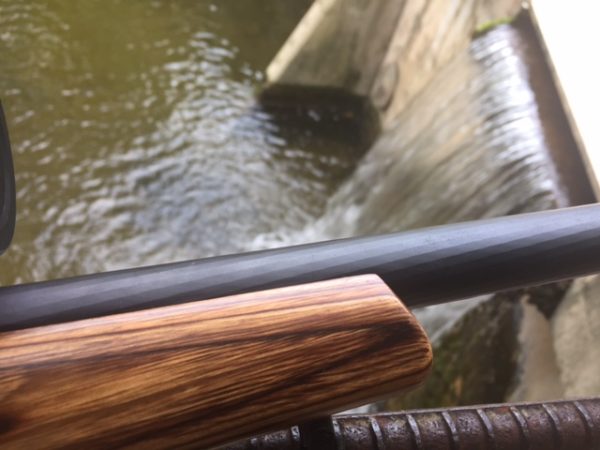 Its 20-inch heavy, cold hammer-forged barrel with recessed target crown has a unique spiral design and the laminate stock is nicely figured. I expect a long gun designated as a target rifle to have a barrel that’s free-floated. But according to Jeremy’s sophisticated Hammermill Freefloatometer, the 10/22 Target is in full contact with its stock.

Ruger equipped the 10/22 Target with…wait for it…a target trigger. With a light pull and little creep or over-travel, it’s a much better trigger than ships with a standard 10/22 carbine. That said, I’m not sure it deserves to be called a target trigger. When I think “target trigger” I think glass rod. The 10/22 Target’s switch breaks more like dry spaghetti. Not bad, but nothing exceptional. The whole unit is housed in a heat-stabilized, glass-filled, polymer housing. The rubber buttpad provides a firm mount (not that a .22 long gun needs much of one) without being too grippy. The laminate stock is solid, nicely finished and includes two swivel studs. A third stud for attaching a bipod would have been ideal but not a big deal at this price point. The stock’s comfortable, but some checkering on the palm swell would have been appreciated. Unlike the standard carbine the Target model ships without iron sights. Instead, you get a Weaver-style scope base that will also accommodate a tip off mount.

With that bull barrel, the 10/22 target is relatively heavy for a .22 rifle, weighing in at 7.5 lbs. That’s 2.5 lbs more than the carbine model, a 50% increase. As virtually all of that added weight is in the barrel, the 10/22 Target has a distinctly front-heavy feel.

Being a target rifle, the most important aspect of the gun is its accuracy. Here the 10/22 Target is a decidedly average performer. The best group I could coax out of it was 1.125-inch at 50 yards using Federal Premium Gold Medal ammunition. In all, I shot five different types of .22 ammo and the group sizes were virtually the same. CCI Mini Mags were almost as good as the Federal Premium stuff. In the end, the Ruger 10/22 Target looks great, but with 2+ MOA group sizes I’m not sure it deserves the Target designation. Most shooters who are truly interested in accuracy will gravitate to a bolt gun rather than a semi-auto anyway.

In my mind, a Ruger 10/22 should be light weight, handy and reliable. It’s the ideal learning and plinking gun. The 10/22 Target is too heavy to be handy and not really accurate enough to be a target rifle. In the end, this version left me missing the standard 10/22 carbines I’ve owned, which is why I’ll be buying one soon.

Fit and Finish * * * * *
In a word, perfect. The finish is even and tough. Everything feels very well put together.

Accuracy * * *
With 2+ MOA groups, it’s accurate enough for a semi auto .22. I just expect better from a “target” rifle, something a free-floated barrel might help.

Customization * * * * *
The variety of aftermarket accessories for the 10/22 is huge. If you want better triggers, scope mounts, stocks or magazines, someone — or a lot of someones — makes them. Be aware that some aftermarket stocks might not accommodate the Target model’s heavy profile barrel.

Overall * * * *
It’s reliable, comfortable and easy to accessorize. But it really needs to be more accurate. I’ll probably replace it with a standard 10/22 and put the money saved into a better aftermarket stock.