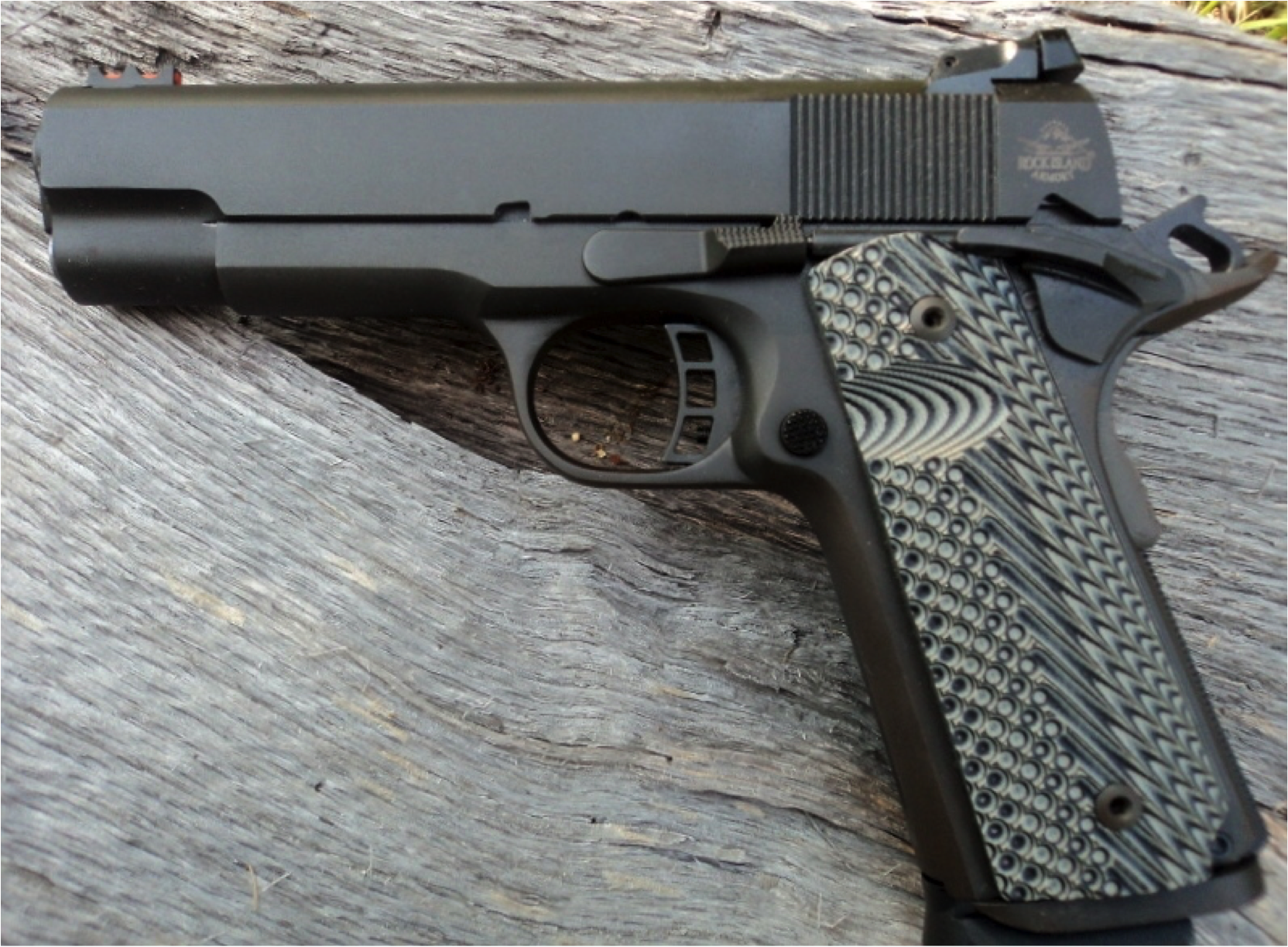 It’s like holding onto a fistful of thunder. Wrapped in the world’s most comfortable cactus. Yeah, I know. We’ve taken you down a similar road before. But there have been a quite few changes at Rock Island Armory in the past twelve months, and their Ultra MS Combo 1911 is one of them. RIA had introduced a single stack 1911 chambered for their their 22TCM. I picked up their MS model, (or Commander sized, if you don’t fear Colt’s lawyers). I thought it was the most fun gun I had ever owned. I was wrong . . . 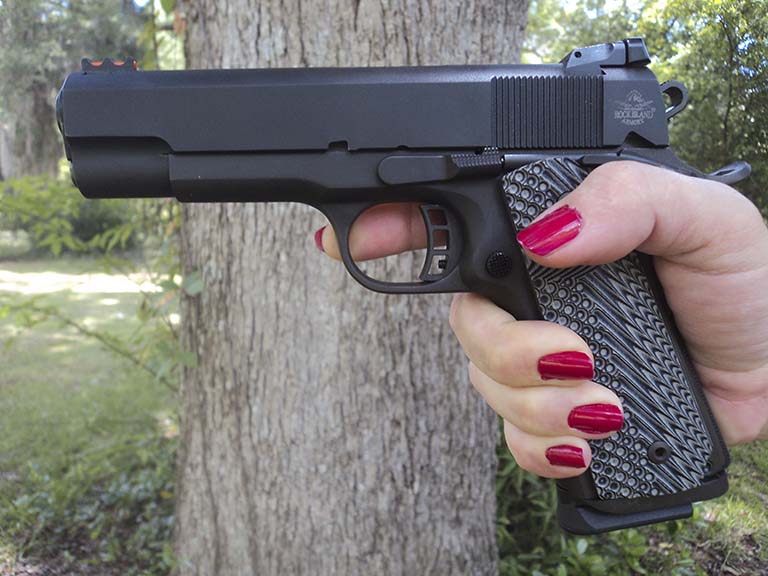 This gun is the most fun. It fires both RIA’s 22TCM round as well as standard 9mm parabellum. Hence the ‘combo’ in its name.

I’ll be doing this review a little differently than most. I’m leaving this gun bone stock for the next year while putting every bit of ammo I can get my hands on through it. I’ll be testing the long-term durability and quality of the gun, because so many people insist that a gun at such an affordable price can’t be any good. During that time, I’ll be posting updates about this gun, any problems, any warranty work, and a round count and whatever else I put it through.

There are several important differences between this gun and the one I reviewed last year. But what shines the most is one thing that didn’t change much at all. The price.

Last year, I spent a little under six bills on my double stack and I found several aspects wanting. I loved the gun, but I knew there were things I would have to change if I was going to enjoy shooting it fully. This year, I spent a little under six bills again. However, this time I found the weapon to be much improved. Better sights, better grips and a flared magwell add a great deal of value for the price of this gun. And sure, it’s chambered in a proprietary wildcat round. But the folks at Rock Island took that into consideration too, and included a conversion to 9mm that consists of a second barrel and recoil spring.

In the same price range as other gun makers’ entry level GI models, the Rock Island Ultra series includes upgrades such as a commander-style hammer, a nice wide beavertail and sights that are actually useful.

I’m not a 1911 purist. I appreciate the history of the design and may break down and get a GI one day. But I have no problem favoring modern convenience over a sharp-tanged grip safety. And GI grips? Cheapo plastic, both spikey and slick at the same time? No thanks. This is a much better option. When I unwrapped the gun to inspect it at the gun shop when it came in, the first thing I noticed was just how much those G10 bit into my hands (in a good way). This sucker was drenched in oil, but there was no way I would have dropped it by accident.

The rear of the grips is a row of blades, while the front third of the grip is like a pincushion. The slightest squeeze is enough to leave sharp impressions. Sound painful? It isn’t. It’s the order and careful design in how every edge lays that not only prevents the edges from cutting, but also guides the gun and the checkered mainspring housing into your grip.

The front strap on this model isn’t checkered, with only a slight serration. The pincushion front third of the grip panels, however, function like a bed of nails. Hold on, and the gun stays exactly where it’s supposed to be. And the scallop to the mag release is perfectly smooth, so it will not wear down your safety callus. And down there at the bottom is a flared magwell. It appears to work just fine, though I admit I’m not a competitive shooter and haven’t practiced much with it yet.

You may have also noticed the checkering on the slide stop and extended safety. That checkering is aggressive and might require a lesson in not riding the slide stop for newbies. Otherwise said noobs might ride their thumb on the damned thing. I can hear it now: “Uncle Sean, your gun isn’t working.” In fact the only problems in function I have had with this gun were the result of exactly that. Riding the slide stop prevents the last round hold open, and rubs the slide, slowing it down and causing stovepipes.

I found the edges on the safety to be a bit rough…they could have been relieved just a touch more. But it’s a pretty common thing to find, and they will wear smooth over time. There really is nothing like a good fiber optic sight in that magical hour before dusk. Plenty of diffused light to pick up. This is another of the improvements over RIA’s standard model. That fiery red-orange light pipe pull in all that light and directs it right at your pupils.

I’m cross dominant, a righty who shoots off his left eye. I grew up shooting rifles with one eye closed, and having multiple instructors in my childhood telling me to learn to shoot left handed. I also grew up shooting Weaver. Now, to utilize my left eye, I shoot isosceles and just move the gun or cock my head an inch or so. With a blazingly bright fiber dot out there, it makes sight acquisition easier than ever. I can’t say it’s improved my shooting, but I can pick up those sights instantly. The rear sight is the same adjustable sight as on previous models. It’s simple, it works, and it’s easy to adjust. Which is handy when you can fire two rounds from one gun with different points of impact.

And this is where my one gripe with the gun comes in. The one thing I want to change right now, is to add another slide. I want — I crave — a slide kitted up for the 9mm barrel with fixed sights. The reason that Rock Island doesn’t sell it that way already is because another complete slide would increase the cost of the gun quite a bit. But it’s the first thing I will be doing when my year is up. Thankfully, there are a couple places that stock the parts I need at pretty affordable prices. One of the other things I love about the gun is the adjustable trigger. It’s not pull weight adjustable – it snaps at a sparkling clean 4.5lbs. The adjustable trigger stop allows you to limit the trigger’s overtravel keeping your reset as short as you like it. I have tested this, and it seems strong and effective. This may work loose after time, but we’ll find out. The bark of the 22TCM is no little pop, it roars with an echo that carries for miles. The round has only been around for about half a decade, and commercially available for a little less than that. And yes, it’s proprietary. The 22TCM is only made by Armscor, who also happen to make the only pistols chambered in it.

With this kind of monopoly over a caliber, you might think that ammo would be hard to come by, expensive or in some other way problematic to acquire. And for most proprietary round, it is a very long road from wildcat status to the shelf at Academy or Wally World.

The 22TCM round was originally conceived by Fred Craig of Atomitronx, and fully developed with Armscor. Originally called the 22 Micromagnum, it’s now more economically called the 22TCM for “Tuason Craig Micromagnum”. The Tuason in this deal is the family that owns and runs Armscor and specifically the man in charge, Martin Tuason. Armscor has the round produced in factories in the Philippines as well as here in the US in order to ensure a steady supply of the cartridge. It’s sold online through most ammo suppliers now, as well as Armscor’s own online pro shop, Advanced Tactical. It’s even been spotted in some Cabela’s stores recently.

Magazines for the Ultra Combo are pricey at $40 a pop. There are several 38 Super magazines on the markets from makers like McCormick, Wilson Combat and such that I hear will function “most of the time” with the TCM round. But if you’re going to pay about the same price, you may as well buy a mag that was designed fro the round. Any full size 9mm 1911 magazines will work when you’ve dropped in the 9mm barrel, but more on that later.

I was disappointed that I only received one magazine with the gun. In today’s market, most gun companies are providing at least two mags. (From online scuttlebutt, RIA is starting to follow suit with other calibers, but the TCM mags aren’t standard mags, so for now they only come with one.) But how does it perform? Based on my sample gun it performs wonderfully. The round pushes a 40 grain JHP round at roughly 2000fps. From this gun and its 4.25 inch barrel, it has been chronographing at a 1950fps average. With an average muzzle energy of 340lbs/ft we’re looking at 9mm levels of energy.

You may be questioning exactly what this is good for, and with good reason. I can hear “Solution looking for a problem!” coming from the comments section already. In the next post I do on this gun, I’ll be exploring the 22TCM round and its capabilities along with lots of 9mm fired from the gun, too. Expect wet, messy fun with things being penetrated while others explode. Accuracy: * * * * *
I may have been able to tighten up the above group more, but the spread is all me. A little tweaking with the adjustable rear sight and I’d be right on center. Being able to ring steel at 50 yards is nice. It shoots fast and flat. This thing is like a lead-based laser beam.

Ergonomics: * * * * *
It’s quite simply a 1911. Browning got it right over a century ago. The beavertail and G10 grips are perfect for keeping your hand high and safe and secure.

Reliability: * * * * *
It just runs. You’d expect it to do so while shooting the only factory ammo that’s made for it. But when you consider that this is a fairly new, bottlenecked snowflake round being fired from what is often considered to be the most finicky platforms, that’s actually pretty impressive.

Customize This: * * *
There is no rail, and there isn’t much you can, or actually need to do to customize the Ultra Combo. There is of course a plethora of 1911 parts out there Replace and improve as you will. However, in the world of 1911’s, this is pretty much standard. Rock Island offers this same size gun in a railed version, if that’s your thing.

Overall: * * * *
I would like two slides for a convertible caliber gun. The points of impact are far enough apart that adjusting the sights is needed past 10 yards or so when you make the switch. But this would drive the cost of the gun up to a point where you could simply buy two base model RIA 1911s. It really is a great gun, in a great caliber. Well, two great calibers. Watch this space for a look at the 9mm side of things.