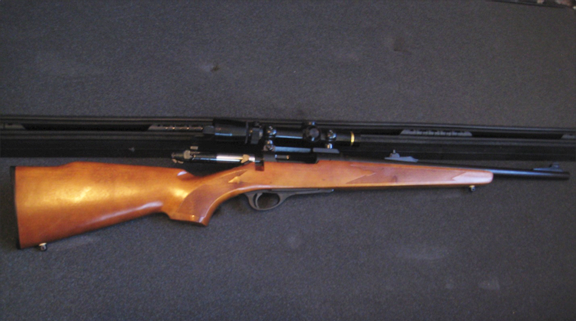 By Russ C in Alaska

I am a lifelong hunter/shooter and an avid reader of TTAG since the days of Sandy Hook. I’ve long wanted to do a gun review but didn’t own any firearms that everybody didn’t already know about. Also, I’m not a particularly eloquent writer. But, when I came to receive this latest gem, I knew this was my chance. Enter the Remington 600 Mohawk. My particular rifle is chambered in the underrated and oft-ignored 6mm Remington . . . First off, a bit of history behind my particular piece. It was, for many years, a favorite deer rifle of my father’s. I expressed an interest in acquiring a 6mm hunting rifle, and he started talking about this one. He has literally boxes full of the racks of many, many dozens of Sitka Blacktail deer that met their demise at the end of this rifle.

For those who don’t know, in Alaska we don’t have whitetail deer, but rather their considerably smaller cousins, the Sitka Blacktail. I’m a huge history buff, so you’ll have to suffer through my fascination with the story behind this cartridge. None of this is hard to find on the internet but I’m gonna share it all anyway. Buckle up…

The 6mm was originally introduced by the Remington Arms Company as the .244 Remington. It was very closely related to Fred Huntington’s (of RCBS fame) .243 Rock Chucker. Both the .243 wildcat and the commercial version were based on the .257 Roberts casing, and while I’m not an expert, my understanding is that the primary difference between the two is a slightly more abrupt shoulder angle on the Rock Chucker.

For those who are curious, RCBS actually stands for Rock Chucker Bullet Swagers, and their flagship reloading press is to this day called the Rock Chucker Supreme. Anybody other than me fascinated by this? No? Moving on…

It was introduced the same year that Winchester released their now wildly popular .243 Winchester, the cartridge that would eventually send the .244 Remington down the memory hole. They were released just a few months apart in 1955.

Looking back, it seems obvious (to me) that the .244 Remington was slated for failure. It was introduced with the idea that it would become a “super” varmint cartridge, while the .243 was marketed as an “all around” varmint or big game caliber from the get-go, its 1-in-10” twist sending everything from 75-105 grain bullets downrange with nary a hiccup. The .244 came standard with a 1-in-12” twist, which was suitable for small varmint bullets (75, 85, or 90 grains) but the slow twist just couldn’t stabilize the “deer size” 100 and 105 grain bullets that the .243 shot so well.

Needless to say, the added versatility of the .243 is what drew hunters to the Winchester round and left the .244 in the dust.

In 1963 Remington finally got the message that American hunters were trying to send. They wanted a multipurpose rifle, and the .243 filled that niche. They rebranded the .244 Remington as the 6mm Remington and started fitting them with 1-in-9” twist barrels. The case, however, remained unchanged. So yes, you can load .244 Remington cartridges in your 6mm Remington rifle.

However, by that time Remington was too late to the game. The .243 Winchester had effectively cornered the market and the 6mm Remington was never able to get a real foothold. Now, a brief history lesson of the Mohawk rifle…

The Model 600 was the precursor to the Mohawk 600, which was offered only as a “promotional rifle” between 1972-1979. According to the Remington website, there were approximately 97,594 Mohawk rifles produced, and they were offered in .222 Remington, .243 Winchester, 6mm Remington, and .308 Winchester.

The primary difference between the Mohawk and the original Model 600 was the lack of a vent rib barrel on the Mohawk.

As the Mohawk is a relatively uncommon rifle today, I have heard that a rifle in excellent condition should fetch one thousand dollars, sometimes more, in a private sale. I have no personal experience in this matter, but it is an interesting testament to the desirability of these rifles.

By all accounts, the Mohawk series was an exceptional performer. Ahead of its time, more accurate than its competitors, even with its short 18.5” barrel. I can make no claim to that statement either, but in talking with various old-timers who were around at the time, that seems to be their consensus.

I know you all came for a gun review, not a history lesson, so let’s get to it. Appearance
About what you’d expect. A nondescript blued barrel, with a nondescript walnut stock. This particular rifle was manufactured in 1978, and it has aged well for my taste for a nearly 40 year old rifle. Some people like the “tactical” look, but personally I love the traditional appearance. Fit and Finish
Simply put, beautiful. It’s not a show queen, but its rugged and functional elegance cannot be beat. There’s a small area where the safety lever has rubbed away at the stock after years of use, but it doesn’t bother me in the least. As far as I’m concerned, it’s added character.

The stock has its share of scratches and spots that have been rubbed from years of use schlepping about in the woods. None of which I believe can be attributed to workmanship, but rather hard use and character building over a lifetime of trips into the field. 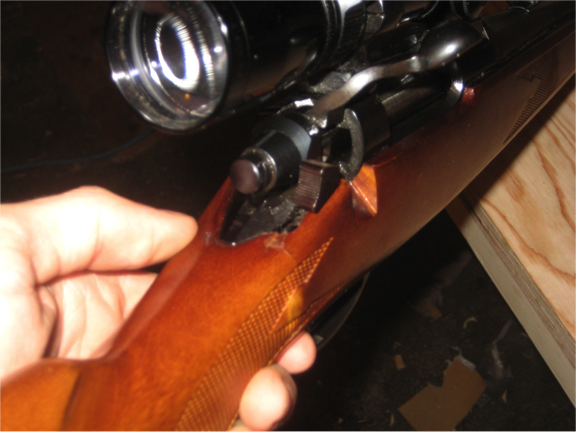 Ease of Use
It’s a bolt action rifle. Step one, put round in rifle. Step two, close bolt. Step three, pull trigger. I don’t know of any firearm with a simpler manual of arms.

Disassembly
See above. Pull the bolt out, clean the rifle. Doesn’t get much simpler. Handling Characteristics
As far as rifles go, it’s pretty nice actually. It’s a little heavier than you might anticipate because of the thick barrel on it, but its short overall length makes it much less cumbersome when plowing through thick brush than a rifle with a 22” or 24” barrel would be. Intended Use
It’s a hunting rifle, and it excels in that role. Short enough to pack through the brush without hanging up, light enough to pack up the mountain, and more than sufficiently accurate even with its short barrel. Many unsuspecting creatures have met their match at the “hands” of this rifle.

Aftermarket Options/Accessories
Just about anything you might want to do to this rifle, you can do. Aftermarket barrels are available, stocks can be had, scopes can be mounted, and Timney even offers a trigger for it.

Favorite Feature
A bolt action rifle doesn’t have a whole lot in the way of “features,” but I like everything about this rifle.

Least Favorite Feature
Ahh, the obligatory “I love this firearm, but…” section. However, all jokes aside, there are a few things I don’t like about this rifle.

The first and biggest issue is the manner in which the bolt is removed. Anybody who is familiar with the Model 700 knows that in order to remove the bolt, you simply push on the small button in front of the trigger and the bolt slides right out. Not so with the Mohawk 600. In order to remove the bolt, one must use a very small screwdriver or tip of a pocket knife to depress a small button *inside* the action next to the bolt in order to remove it. Not impossible by any means, but an annoyance because it requires a tool to do it. 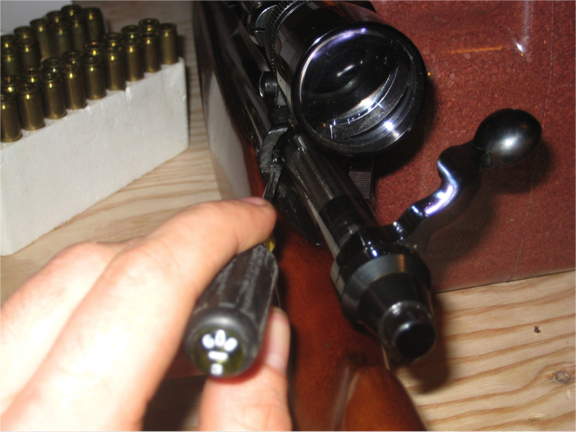 I also don’t like the shape of the safety lever. I much prefer the small knob found on the Model 700 rifles. And thankfully the Timney trigger comes with such a safety lever, and that is one thing I intend to replace.

The trigger and guard are plastic. Nothing wrong with that really, I just prefer metal for its increased durability. The bottom of the stock has relatively square edges, rather than the rounded shape traditionally found on most rifles. It’s an acquired taste, but I like it. Accuracy
Finally, the moment you’ve all been waiting for. When I took this rifle out for its first range trip, I knew it hadn’t been fired in several years. So I brought out a couple boxes of Remington 100gr Core-Lokt ammo to see how she’d do.

It took a couple of groups to get this rifle dialed in. The best group of the day measured in at about 1.5” for a 5-shot group at 100 yards. Point of aim was the center of the black square. Shot off of sandbags on the bench, no fancy sled. I’m far from a professional shooter, but I’m satisfied with this grouping. The scope is relatively low-powered, 1.5-5x, and the ammo is cheap. I’m confident with a more powerful scope and decent handloads, this rifle can be dialed in to sub-MOA accuracy. It was near the end of the range trip before I decided to take pictures, so this is the only bench group I can provide evidence of.

Since I don’t have the luxury of shooting off a bench while hunting, I decided to try my hand at shooting unsupported (standing up). This is a technique I rarely practice, so my groups were less than stellar. The best group was about 3” at 100 yards, 5 shot group. No target picture unfortunately, as it was stapled over and shot up some more.

More practice needed, for sure. Thankfully, deer season is still several months away.

Reliability
The TTAG Guidelines suggest a minimum of 200 rounds before claims to reliability may be made. I only shot two boxes (40 rounds) through it during this trip, but in talking with my old man he can never remember any hiccups with this rifle over years of hunting with it, so I feel confident in saying that it has no reliability issues. Not to mention, it’s a bolt action. 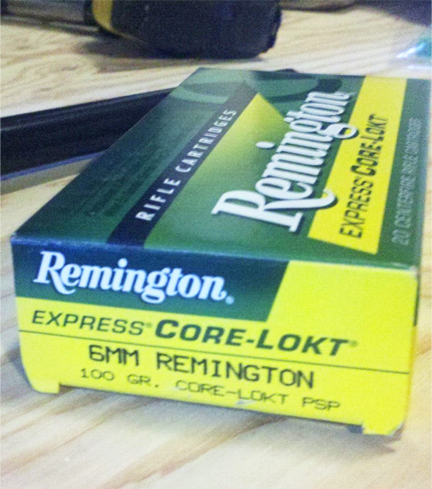 No malfunctions to report, it ate the cheap Remington ammo and came back begging for more. (As an aside, I visited three different sporting goods stores and only two of them carried any 6mm ammo, and they both only had the Remington Core-Lokt variety. As a handloader this isn’t a concern to me, but it may be of some concern to others. The .243 has a MUCH larger variety of ammo to choose from.)

Accuracy: * * * *
A 1.5” group at 100 yards with a mediocre scope and mediocre ammunition, that’s pretty good in my book. With a better scope and better ammunition, along with more training on my part, I’m confident it will have no problem achieving sub-MOA.

Reliability: * * * * *
It’s a bolt action rifle, and while they’re inherently reliable, I’ve heard no stories of this particular rifle having any problems over years of use.

Customization: * * * * *
Customizing bolt actions is a somewhat limited market, but anything you can think of to do to such a rifle, you can do to this one. Stocks, barrels, triggers, sights and scopes, you can buy them all.

Quality: * * * * *
Some may knock on Remington’s reputation for quality in modern firearms, but this one is undoubtedly top-notch.

Value: ?
Hard for me to say because I don’t know what they sold for back in 1978, nor do I know what it would fetch on the used market today. Definitely a rifle I’m never getting rid of, though.

Overall: * * * * 1/2
If it weren’t for the few small things like the plastic trigger and obscenely large safety lever, I’d give it a full five stars in a heartbeat.