There are very few firearms that are truly iconic. The M1 Garand, the H&K MP5 and the Thompson SMG are prime examples. But for the Russians in WWII, there’s no better example of a truly iconic firearm than the PPSh-41. Produced during the height of the war in an effort to repel the German invaders, over 6 million examples of this firearm would eventually be produced and it would see action in armed conflicts all over the world. From the frigid streets of Stalingrad to the Cambodian jungle this one firearm would leave an impression on the world that would not soon be forgotten.

The firearm for this (and some other forthcoming reviews) was provided by Battlefield Vegas. Their generous hospitality, seemingly limitless technical expertise, and excellent facilities were instrumental for getting the data and pictures required to make these reviews happen. I regret that it has taken damn near 9 months to actually write these reviews, but hopefully it will be worth the wait.

Many forget that during the opening years of WWII the Soviets and the Nazis worked together to conquer Europe. The Russians didn’t do so hot — a quick detour into Finland ended with their gaining a large portion of Finland’s land and economic capacity, but they paid a heavy price for it. During that conflict the Finns had deployed their Sumoi KP/-31 SMG to great effect in the forests and trenches of their native land. It was extraordinarily deadly in those close quarters situations especially compared to the standard Mosin Nagant M1891/30 deployed by the Russkies.

The Soviets had a comparable weapon in their arsenal called the PPD-40 but the design of that firearm was too complicated for mass production in the numbers that the Red Army demanded. So it was redesigned to keep production costs low, and the result was the PPSh-41. The overall design of the PPSh-41 (or “papasha” as it was often called) really couldn’t be any simpler. The receiver (along with most of the other parts of the gun) is made from simple stamped sheet metal, something that could be quickly turned out in great quantities. The stock was designed to be a simple bolt-on addition to the gun made from the readily available raw materials the USSR had on hand (wood) with little additional work.

The barrel was designed to use the same 7.62mm bore as the existing Russian arsenal of three-line rifles so that the same drilling and rifling machines could be used on all production guns to maximize throughput, and often production was further increased by taking an existing Mosin Nagant barrel and chopping it in half to make two PPSh-41 barrels. These design changes meant that the factories in Russia could produce a brand new PPSh-41 in as little as 7.3 machine hours compared to the nearly 14 hours required for the previous generation.

There was also a lot of thought put into the longevity of these guns. The designers knew that they were about to place this in the hands of conscripts who just weeks before had thought that an outhouse was the pinnacle of engineering and these guns wouldn’t be seeing much (if any) maintenance. As a result the gun was designed to run without any cleaning for years on end, as evidenced by the chrome lined barrel and chrome bolt assembly, but it was also designed to be as easy to maintain as possible for those soldiers who felt up to the task.

That’s all good on paper, but in the field that makes for a pretty terrible firearm. The PPSh-41 is definitely a no-frills kind of firearm and it lets you know from the moment you first pick it up. The gun feels light, almost hollow, like the tin firearms that were prevalent in the 1950’s but cheaper. The firearm is composed of two parts, an upper receiver with the barrel permanently affixed and the lower receiver with the magazine well, bolt assembly, and trigger pack. The two parts are held in place with a spring loaded catch on the back of the upper receiver much like the dust cover on an AK-47. The two parts don’t really fit together very well — the two halves rattle against each other with only the hinge keeping them in place.

Down under the gun is where all of the controls reside, conveniently located within and around the trigger guard. Convenient for the assembly — not for the soldier. Within the folded metal trigger guard are two protruding levers, the forward one being the rate of fire selector and the rear being the trigger proper. That trigger looks to be one of the few parts that is actually properly machined, sporting an oddly out of place ergonomic look to the blade. The rate selector is more in line with the rushed design and production of the gun, a simple folded piece of metal that toggles back and forth between “full auto” and “semi auto.”

Just forward of the trigger guard is the magazine well. There’s another small folded piece of metal back there to act as a magazine release, but the spring loaded nature means it quickly returns back to the folded position after being used for its intended purpose. There’s a tendency to get your finger caught up when that release snaps back — I only had to do that twice to my thumb before I figured it out. The magazines for the PPSh-41 come in two flavors. The ever-popular drum mag held 71 rounds of 7.62 Tokarev ammunition, a funny looking cartridge not entirely unlike .357 SIG with a fatter body tapering down to a smaller projectile. It was easier from a mass production standpoint to stick with 7.62 caliber projectiles and expand the case to fit than to re-work everything to accept the vastly more popular 9mm Luger or 45 ACP rounds.

That 71-round drum magazine is awesome in theory, but the fact that they were made from 0.5mm thick stamped sheet metal made them extremely prone to breaking and malfunctioning. The 35-round box magazine was more popular for its reliability, but later in the war the drum magazine would make a comeback as they increased the thickness of the sheet metal to make it more reliable. On the other side of the gun from the magazine well is the ejection port. Manufacturing a side-facing ejection port was simply too time consuming and difficult, so the Russians simply had the gun eject straight out the top of the receiver. Again, a mechanically acceptable solution that sped up manufacturing, but when your field of view is being constantly interrupted by flames and flying casings it makes a soldier’s job of staying on target that much more difficult.

On the other hand, clearing jams and checking the firearm was made simpler by this design since all of the important bits of the gun were instantly visible without angling the gun in an awkward manner. The only other truly machined part of the firearm is the bolt. Made from a solid piece of metal, the bolt features a hole for the rear return spring and an extractor that is placed on the top of the firearm to aid in the straight up ejection. The rubber end plate seen in this picture was added by the armorers at Battlefield Vegas to keep their PPSh-41 from beating itself to death, however this was not an original part on the gun.

One interesting design feature is the safety on the bolt. There are a number of Russian firearms that use the bolt as a safety, like the way the end of the bolt on a Mosin Nagant is designed to be turned 30 degrees for the “safe” position. In this case there’s actually a small catch machined into the charging handle on the bolt that’s designed to slide into a corresponding cutout on the upper receiver of the gun. This is designed to keep the bolt from accidentally being pulled back — since this is an open bolt design the gun is usually carried with the bolt forward and is cocked prior to action.

I spent some time with a bunch of Russian reenactors and I’ve seen a situation where someone had slung their PPSh-41 on their back, the charging handle caught on their belt, and it had pulled back the bolt just far enough to allow a round to pop up but not far enough to catch the trigger. When they repositioned their gear the charging handle slipped free and emptied the magazine a few seconds later. Safety first, kids.

Unlike the Thompson SMG the PPSh-41 is extremely easy to disassemble. The upper receiver tilts forward once unhooked, and the return spring can be lifted out just like in an AK-47. No need to mess around compressing the spring and using paper clips on the guide rod to get it in place, it all just works. Easy enough that a Russian peasant can figure it out. There are also iron sights on the gun. They are more useless than an anti-gun firearms reviewer. You will never need them or actually see them while firing the gun, but it’s the thought that counts. Out on the range this thing is absolutely terrible. The best way to describe this gun is that it’s the exact opposite of a Thompson SMG. Where the Thompson had a smooth and polished trigger, the trigger on the PPSh-41 feels like it would be right at home on a $400 AR-15. The recoil on a Thompson is slightly heavy and controlled, while the recoil on the PPSh-41 is light and uncontrollable.

After a few rounds the gun starts walking all over the paper — I could put an entire magazine in full auto on a chest plate from a Thompson, but I couldn’t keep the PPSh-41 within a paper plate even at 10 yards. The cyclic rate is simply too high to manage and there’s not enough mass in the gun to keep it controlled. 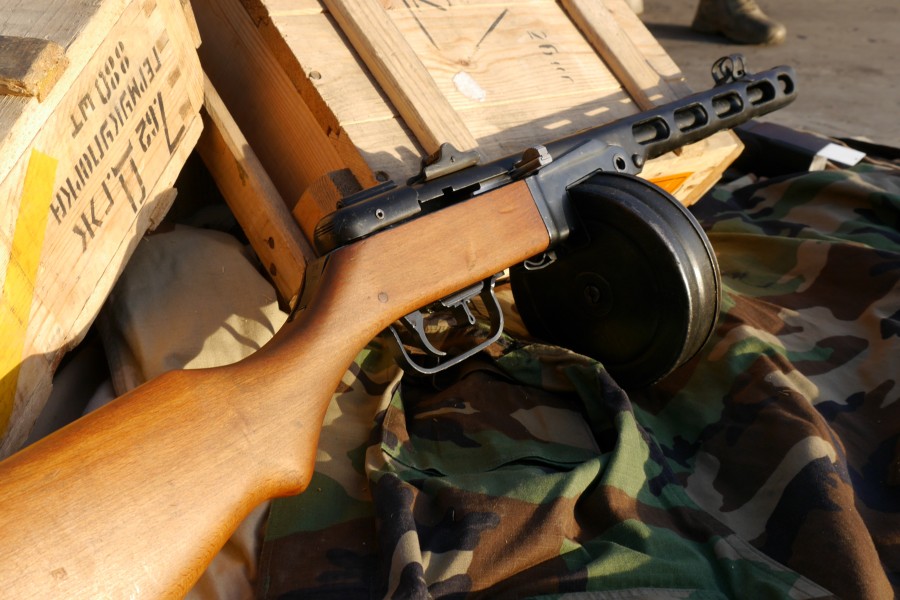 This gun is another example of why you should never meet your heroes. The PPSh-41 was one of the coolest looking SMGs of WWII and I had always wanted to shoot it. But when I finally took my first shots it was like learning that [spoiler alert!] Santa Claus isn’t real. The papasha is a fantastic example of the ingenuity of a nation — identifying issues with their existing arsenal, developing a firearm to meet that need, and engineering it to be as quick and cheap to manufacture as possible — but as a shooter, the gun is definitely a let down.

There’s none of the fun that comes with emptying a magazine from a Thompson or an MP5. There’s none of the nostalgia that comes from the thump of an M60. It’s just a bullet hose, living up to its design principles of putting as many rounds downrange as possible in the shortest window of time and as cheaply as practical.

Accuracy: *
How about you get a little closer there, comrade?

Ergonomics: *
Probably better used as a stool than a firearm.

Overall: * *
The gun is cheap to buy and cheap to run, but that’s about all it has going for it. Not as much fun as other machine guns.