Pew pew pew! The Space Invader has landed. Made by Noveske with an assist by Q and distributed exclusively by Silencer Shop, the Space Invader is the newest entrant to the pistol caliber carbine market. And before you say it, yes, there is space in this segment for it to invade. We, the gun-buying public, can’t get enough PCCs. And for good reason!

Whether it’s a “large format pistol” like the Space Invader I put through its paces here, a short barreled rifle like the Space Invader SBR that’s also available, or built out as an actual carbine/rifle with a 16-inch barrel, there’s a lot to love about a big gun shooting a small cartridge. Ammo is inexpensive, recoil is minimal, sound suppression is great, and modern handgun projectiles are extremely effective.

Meanwhile, a firearm that can be braced against the shoulder, cheek, etc. — especially one with an optic — is far easier to operate effectively than a handgun is. Reaching proficiency with a gun like the Space Invader is orders of magnitude easier than reaching and maintaining proficiency with a typical handgun. This makes a PCC a great choice for home defense, in particular when multiple family members may use it. So the “why” is obvious, while the “how” is where Noveske has differentiated itself. Aiming for the high-end of the market, they’ve made a complete firearm based on much of what makes their Ghetto Blaster (which itself is very heavily based on Q’s Honey Badger) unique.

Channels machined down the sides of the upper receiver provide clearance for the pistol brace’s (or stock’s, in SBR flavor) struts when collapsed. This allows for a super shorty, PDW-style length of pull without having to make an exceptionally wide stock that clears a typical upper receiver. A hardened steel QD socket insert is integrated into the bottom, front of the brace or stock, which includes an abbreviated receiver extension that uses a proprietary buffer and spring system.

On the left side is a large button, which unlocks the struts from their adjustment notches. Thankfully Noveske’s version of Q’s brace/stock system (the brace version of which is made by SB Tactical, by the way) has a middle notch. My biggest gripe about the Q Honey Badgers was a brace/stock that was either too short or too long. The Space Invader’s half-way notch is extremely welcome. And a slim, paddle-style magazine release lever located at the rear of the flared magazine well. Press it forwards to release the magazine, which allows for a great grip-and-rip tactical reload. AK-style magazine karate chop not recommended. Speaking of magazines, the Space Invader bucks the trend and is designed for Colt-style stick mags. In my humble opinion these look far better in a PCC than rearward-swept GLOCK mags do. They also tend to lock back on empty more reliably since they were made for subguns in the first place and the bolt catch part of the follower is in a better location.

Unfortunately my praise for the old Colt mags ends right there. They’re really heavy, difficult to load to capacity, and rarely reliable. The only ones I’ve found that seem to work well are the Brownells-branded ones at about $32 a pop. Noveske’s included Metalform magazine caused weird feeding problems for me and I never made it through 20+ rounds without a stoppage. Knowing Colt stick mags often suck, I brought the two known-to-be-reliable out of the nine C-Products Colt mags I own with me to the range and had better success with them. In all but one case, the Space Invader fully emptied those mags.

The idea of Colt stick mags is good, but it’s high time somebody made reliable, affordable polymer ones. A Geissele Super MCX SSA trigger is standard equipment. It’s a fantastic trigger that’s crisp, light, and reliable, firing hard-primer ammo with authority. I was even able to have some rapid-fire fun with it, as seen in the video. Up at the shooty end, Noveske’s Space Invader barrel has an integral 3-lug mount machined into it; the barrel rifled all the way to the muzzle. The HK-pattern 3-lug is an industry standard for quick installation and removal of a suppressor. As much as I like a 3-lug — and I do! — some 1/2×28 threads in front of the lugs would be a welcome addition. Thankfully the Dead Air Wolfman offers every mounting option you could ever need for a 9mm suppressor. From boosters and fixed mounts in every thread pitch out there to a 3-lug adapter, they have you covered. Unscrew one and thread in another. Matching the non-railed diameter of the 6.25-inch Noveske handguard, the Wolfman looks great on this gun. It’s a perfect functional match, too, as it’s built for high-volume, subgun type shooting and its larger-diameter design fits more easily on a PCC type gun than a typical handgun. Short for minimum length and weight (9.8 ounces), and long for maximum sound suppression. The two modules simply thread together and, thanks to a nice taper in there, only have to be gently hand snug. Another trick up the Wolfman’s sleeve is an end cap designed to house a wipe; a puck of flexy rubber through which bullets pass. By snapping shut behind the bullet and generally creating a tighter gas seal than a metal baffle can, the use of a wipe can further reduce sound levels. Ill-prepared, I didn’t test the Wolfman with wipes. 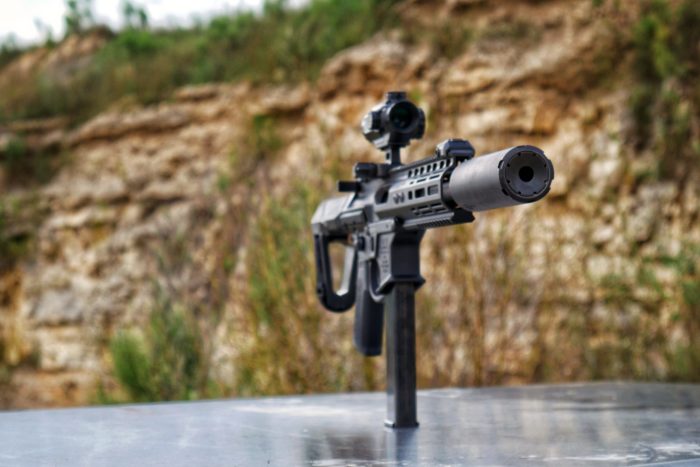 Nevertheless, I was impressed with the Wolfman’s performance. What were originally intended to be a few in-line tweaks to the Wolf-9SD ended up becoming so many improvements that Dead Air christened it as a new product.

To me, the chief improvement is that the Wolfman is slightly longer in its short configuration than the Wolf. There may be some internal baffle design changes as well, but it’s the end result of the short module tweaks that really matter: it’s quieter. Especially on a handgun with a short (e.g. 4-inches) barrel. It’s now far more comfortable at the ear and easily under the hearing-safe threshold when run in shorty mode on a handgun. On a longer barrel, shorty mode is the only mode. The sound difference downrange is fairly minor — the longer barrel having already cut the sound level and reduced the pressure and amount of gas exiting the muzzle — and the difference at the shooter’s ear is effectively imperceptible.

That at-the-shooter’s-ear noise level is one area in which 9mm ARs really do not excel, though. A straight-blowback design coupled with a relatively lightweight bolt carrier group results in noticeable “port pop,” or noise from the ejection port.

That said, Noveske has managed to tune the Space Invader quite well. Whether recoil spring rates or buffer weights or what I’m not sure, but this AR9 was more comfortable on my ears than other straight-blowback ones I’ve fired.

But it’s still closer to sounding to the shooter like a 300 Blackout AR than it is to a 9mm PCC/subgun with a delayed action (e.g. MP5, CMMG’s radial delayed stuff, MPX, even the CZ Scorpion thanks to its ~1.5-pound bolt). When the dust cleared I found the Noveske Space Invader to be an extremely accurate little gun that’s a ton of fun to shoot. It suppresses well and runs reliably with magazines that work; though finding those gems in the sea of crappy Colt stick mags can be a trick in and of itself. Fit, finish, and overall quality is nothing short of fantastic on the Space Invader. For the price Noveske is charging, it darn well should be, of course, but in this realm the firearm doesn’t disappoint. All materials, finishes, and components are top-notch.

Where I’m left wanting a little is in the pistol brace/stock and the choice of Colt style magazines. While the brace is undeniably cool and I love looking at it, it isn’t my cup of tea when it comes to using it. And though I love Colt stick mags in theory, but in practice they often just suck.

They’re certainly more affordable than HK UMP/USC/MP5 or B&T magazines, which also look better than GLOCK mags in a PCC, though I’m not sure the buyer of a $2,550 Space Invader would balk too hard at a $75 magazine anyway. Or there’s always CZ Scorpion EVO mags which work flawlessly, load easily, and cost under $20 each.

Noveske’s Space Invader is one of the nicest, best straight-blowback AR9s I’ve ever shot. But at the end of the day it’s still a straight-blowback AR9. From a functional perspective, there’s a not-very-short list of other PCCs/subguns I’d buy first. Though it would darn sure look nice next to a handful of other Noveske rifles in a gun safe.

Find the Space Invader on its own or packaged with a Dead Air Wolfman or other suppressor at Silencer Shop.

Style and Appearance  * * * * *
One of the best looking AR9s out there. Machining, fit, and finish are also top-notch.

Ergonomics  * * *
The Space Invader has AR15 ergos except for the brace/stock, which I’m not a big fan of due to the extra shorty cheek piece. Bonus points for the ambidextrous, paddle-style magazine release but I’m just not into the brace/stock.

Customization  * * * *
A few components are proprietary, but most parts are fully AR15 or at least AR9 compatible. So customize away.

Reliability  * * *
It ran almost flawlessly with magazines I had previously vetted as functioning well. It didn’t run particularly well with the included magazine. I’d ding the Space Invader more here, but I know it will run perfectly with the right mags and that the right mags are out there.

Overall  * * * 1/2
The Noveske Space Invader is an amazingly high quality “subgun.” It looks great and makes a fairly good suppressor host. But it costs a mint, didn’t run well due to problematic magazines, and is designed around a pistol brace or stock that I’m just not a big fan of. While there is certainly room in the market for the Space Invader, it won’t be invading my safe space. That is, the space in my gun safe. It’s up against 9mm options that I like more for less money. However, if it had Noveske siblings waiting for it, I’d be feeling the pull of its tractor beam more.