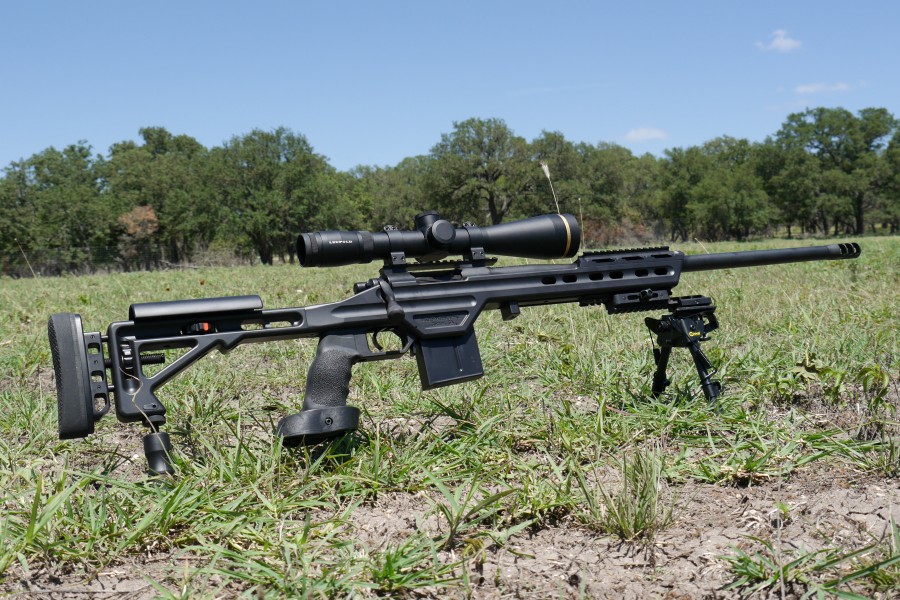 When Masterpiece Arms announced that they were planning on releasing a bolt action rifle at SHOT Show, I wasn’t all that impressed. Masterpiece Arms has a bit of a reputation for making odd firearms, and they’ve never really been known as a precision firearms manufacturer. That was before I took a trip down to Georgia to see their operation in person, and the impression I had of their products changed a great deal following that weekend. To make sure that their build quality wasn’t a fluke I asked to test one of their new bolt action rifles back in Texas and see if it was really worth the coin . . .

The impetus behind the MPA-308 BA was a newly acquired barrel manufacturing shop. The guys at MPA decided to put their new toys to good use making some high end rifles. They started with a Stillers action, added their own custom barrel drilled and hand-lapped in house, and added a stock that is 100% manufactured by MPA. The end result is something that definitely looks the part of a high end tactical style bolt action rifle. 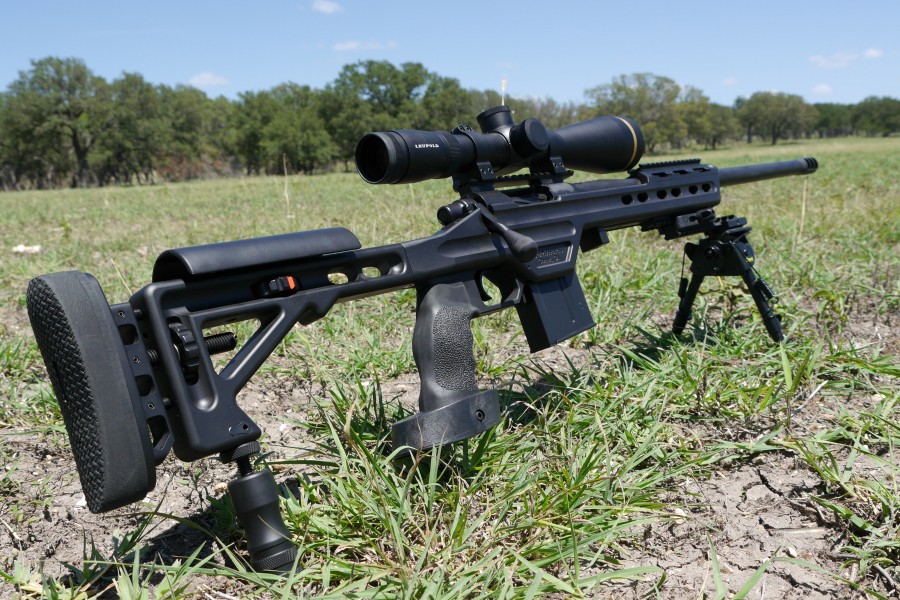 There’ve been a number of changes since the original design was unveiled, starting with a completely re-worked stock. Instead of a spider web style design and a chopped-up Magpul PRS, MPA streamlined and slimmed down the chassis, and manufactured the stock in-house for good measure. The result looks 100 percent better than it did in January, and has a ton of great features. Starting at the back . . . Instead of a Magpul PRS, the MPA guys custom machined an all-aluminum stock that can be adjusted for both length of pull and comb height, and the butt plate can also be adjusted for cant to suit the individual user’s shoulder. The adjustment knobs are color coded so shooters can make sure that the gun is set up the same way every time. The detent holding the wheels in place seems a bit weak. I’d have preferred a little stiffer application of force to be required to move them, as I can see them being spun around in a soft case.

Another handy feature: the included rear monopod. It’s always more stable to use a shooting bag of some sort. But in a pinch or on a stable surface, the rear monopod can give you enough stabilization to make the shot. The monopod features a coarse adjustment button for quick movement and can be turned for fine adjustments. A locking nut makes sure that nothing moves. Interesting side note: the release button on the monopod was stolen from the magazine release mechanism on their MPAR rifle line, making it both easier to manufacture and easy to use.

The MPA-308 BA rifle’s stock is designed as a separate piece on the gun. It can be swapped out or removed for storage. Word is that a folding variant is in the works. Swapping will be dead simple when it arrives. Moving forward to the fire controls, the MPA-308 uses a standard AR-15 grip so you can swap to whatever grip makes you happy. The rifle ships with an ergo grip-esque rubber grip and PSG-1-esque hand rest at the bottom. I’m not entirely enamored with that specific grip, but it’s an easy change. The rifle sports an oversized and checkered bolt knob that can be replaced to suit the end user, but the stock one suits me just fine. The icing on the cake: the gun takes Accuracy International magazines. You can carry multiple mags and quickly replenish your supply using a readily available common magazine. The MPA-308 ships with rails on the top of the action and under the front of the stock for mounting scopes and bipods respectively. Also included: a rail section positioned in front of the scope to allow night vision optics to be mounted in-line for low light shooting. Besides these features, the stock is a pretty minimalist setup that keeps things slick and simple. Just the way I like it.

Out at the front of the gun, the barrel features a muzzle brake attached to the threaded muzzle. The brake gives some recoil reduction properties to the gun, but that threading from the factory is truly a nice feature. If you have a silencer or plan on getting one, having the threading done by the factory is a definite plus. The barrels are all made in-house at Masterpiece Arms. They come in as solid barrel blanks. They’re bored one at a time, profiled, rifled, and then hand-lapped to perfection. Each one is visually inspected to ensure that there are no chatter marks in the barrel. It only leaves the shop only if it is smooth and shiny on the inside. No chatter marks means no copper or carbon buildup throwing off your accuracy, which is a huge benefit down the line. The barrels are also marked with the twist and suggested ammunition; finding the right ammo is a no-brainer. The gun meets all the criteria I have for a good tactical bolt action rifle, namely a slick metal chassis, adjustable stock, replaceable grip, and Accuracy International magazine compatibility. As always, the real question is how well the MPA-308 shoots. I took it out to the range and used the suggested ammunition.

There’s a complicated barrel break-in process described in the manual that I did exactly none of on this gun, despite being a “virgin” barrel. Add to that the fact that I fired the recorded grouping for this gun starting from a cold barrel and firing as fast as possible (as usual) to ensure that the barrel heated up from shot to shot. What we have is a scenario where any average rifle should choke and start throwing out substandard groupings. With the MPA-308 BA, though . . . This is a 5 round group shot at 100 yards. Four of the rounds fall within a grouping that is literally too small to accurately measure (my best guess is about 0.2 MoA). One flier flew low and left, growing the group size to roughly 0.6 MoA (ignore that sighter at the top right). This is what the gun does when the barrel has been used and abused — when the gun is treated right, it throws out between 0.2 and 0.4 MoA groups all day long without any issues.

MPA guarantees a 1/2 MoA result from every rifle and I believe it. This is the second rifle of theirs that I have tested, and both have performed to that standard without any fancy bench rest being required. They work, and they work well. To put that accuracy in perspective, this gun shot a tighter group than the similarly priced Desert Tactical Arms SRS. The rifle checks all of the boxes. Accurate, good looking, full featured… everything you need in a tactical rifle. My only real complaint about the gun: I don’t particularly care for the standard-issue grip. Again, that’s easily fixed. The MPA-308 is a tad long as well, so a folding stock or a shorter barrel might not be a bad idea.

As-is, is the MPA-308 worth $3k? Compared to some other high end bolt guns we’ve reviewed like the Savage 111, CZ-750, and the Weatherby Vanguard Sub-MoA, the gun beats the pants off all of them. It looks better, sports nicer adjustments for user fit and shoots a heck of a lot tighter groups than any of them – thanks to the custom hand-worked barrel. The only real gun we have in the catalog that compares to this is Charlie Sisk’s STAR Rifle, which is heavier, shoots just as well, and costs $3,000+ more.

Accuracy: * * * * *
Meets and exceeds expectations. Even when running the gun hard it stays right around that 1/2 MoA guarantee, usually floating down towards 0.2 MoA when treated right.

Ergonomics: * * * *
The stock is great and fits very nicely, but the grip is a little wonky for my taste. Then again, I prefer a straight grip and not a swelled one, so this might just be shooter preference. Also the gun is a tad heavy, but at this point we’re nit picking.

Ergonomics Firing: * * * * *
The MPA produced muzzle brake soaks up most of the recoil, and the squishy buttplate takes care of the rest. A joy to shoot.

Customization: * * * * *
Rails all over the place, a stock that can be removed from the chassis, and user adjustable length of pull as well as comb height. Excellent.

Overall Rating: * * * * 1/2
Accurate. Comfortable. Customizable. Just cut down on the weight a little bit and come up with a quick way to make the rifle temporarily smaller for transport and you’ve got a five star gun. But as-is, this might be my new top recommendation for those looking for a great accurate rifle. Because it is.