The .40 S&W round is snappier than Chelydra serpentina. Reflecting government efficiency, it’s only taken 26 years for the FBI to acknowledge the round’s recoil “issues” and transition to 9mm handguns firing improved hollowpoint cartridges. With other law-enforcement agencies following suit, the .40 S&W is a dead caliber walking. Before you go, say hello to my little friend — the Magnum Research polymer-framed Baby Desert Eagle III in .40 S&W.

By “little” I mean “full-sized.” The Baby Desert Eagle III stretches a full 8 3/5 inches from beavertail to snout (including a rifled 4.43-inch barrel). It’s also a heavy old thing. Load up the polymer-framed firearm to max capacity (13 + 1 in this version) and the handgun tips the scales at 28 ounces. That’s 10 ounces less than the fatter-handled BDE II — and just three ounces lighter than the 10mm GLOCK 20. 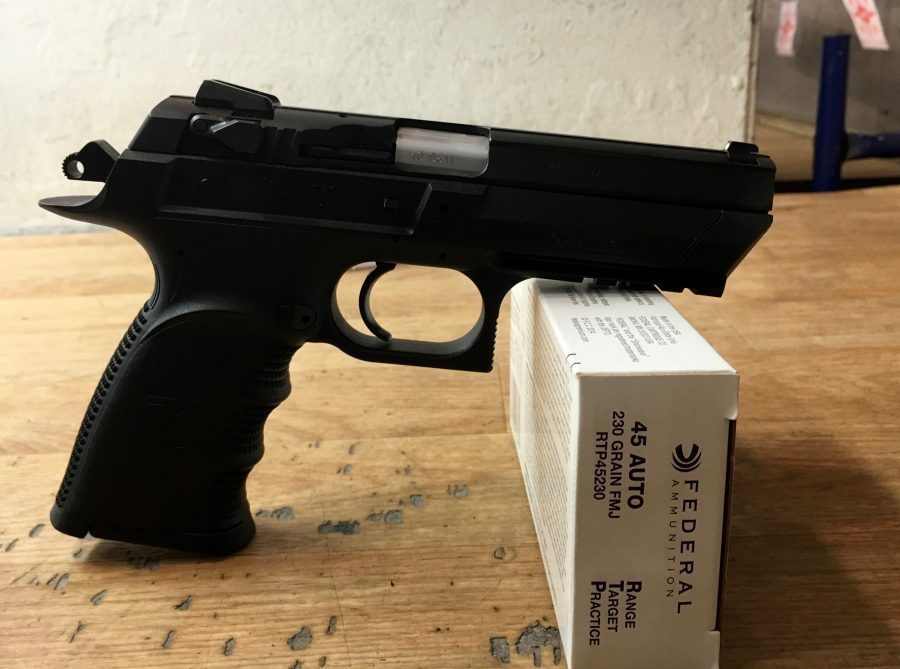 As you’d expect from a ballistic riff on the CZ-75, the BDE III is a perfectly proportioned piece. The stippled finger indents add a dash of panache to the gat, making the nose-heaving handgun a joy to hand and to hold. Along with the wonderfully finger-friendly flat, apostrophe-shaped trigger.

That said, all is not well in ergonomicsland. The BDE III’s enlarged, left-side-only slide stop is beyond thumb reach for smaller-handed folk (who may have wanted to use it as a slide release). Worse, the small, pointy-ended, ambidextrous safety/decocker is hard to disengage, and renders combat racking the BDE III’s slide uncomfortable to the point of inadvisability. Best practice: Turn the gun sideways, grab the slide by its “ears” and pull. While pleasantly gangsta, the technique requires non-ideal sight realignment.

The BDE III’s 12- to 13-pound double-action trigger pull is longer than War and Peace. Unless you’re a police officer trained to shoot a New York trigger-equipped GLOCK — and even if you are — the Baby Deagle’s Falstaff-stout trigger pull presents a worrying accuracy challenge. Half-cocking the trigger only serves to halve the epic journey.

On the positive side, the trigger’s silky smooth and breaks cleanly. Better yet, the BDE III’s single-action trigger pull falls to a user-friendly 4.5 pounds. There’s a short take-up leading to a wall o’ break. No grit, no slop, just click BANG. Best of all, the BDE III’s trigger reset is as short, crisp and controllable as the SIG SAUER Legion, the reigning king of DA/SA handgun trigger reset. 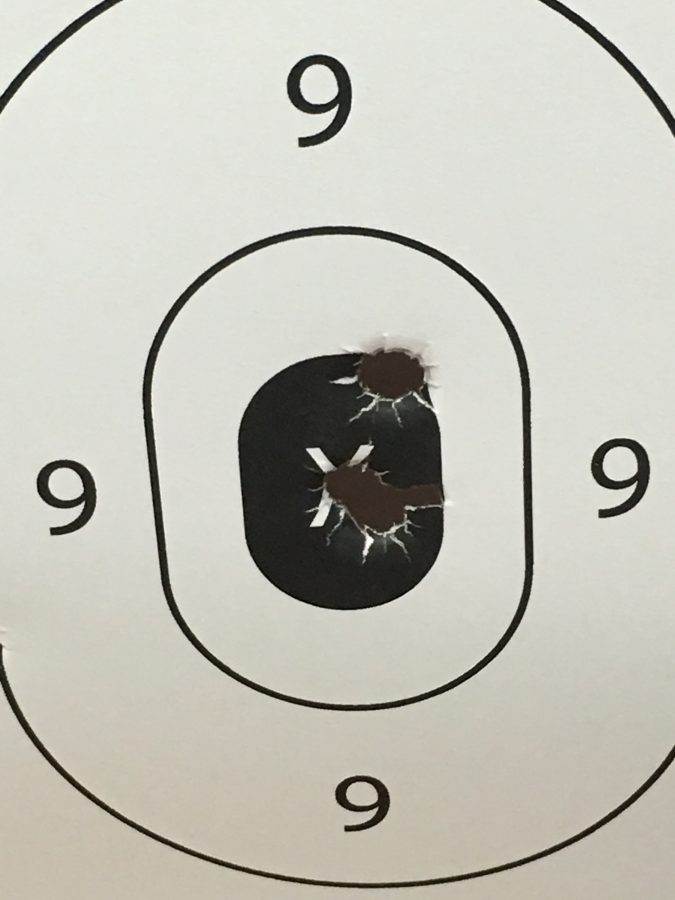 Thanks to its not-inconsiderable size and weight, hand-friendly grip and first-class single-action trigger, the BDE III [finally] tames the S&W .40 cartridge’s much maligned recoil. In single-action mode, the gun made holes exactly where I aimed. (Target at 10 yards, sucky shooter, closed course.) And continued to do so for 500 rounds of mixed ammo, without any malfunctions.

All of which answers the “what” and “how” but still leaves “why” on the proverbial table. Wouldn’t you rather carry a more easily concealed full-size .45-caliber 1911 in your holster? You’re “only” giving up four rounds and the “safety” of a DA/SA trigger. And as sexy as the BDE III is compared to its GLOCK equivalent, John Moses Browning’s single-action brainchild is a similarly weighty tack-driver that makes subsequent gun designs its bitch.

By the same token, you could buy a 13-round GLOCK 21 for self defense. If Deagles are your thing you buy a .45-caliber Baby Desert Eagle III. Or gain plenty o’ capacity and controllability with the 9mm version. Or go mad, buy a full-on Desert Eagle and fire .357 Magnum, .44 Magnum or .50 AE cartridges. With a black tiger stripes! Or gold accents! But not both … 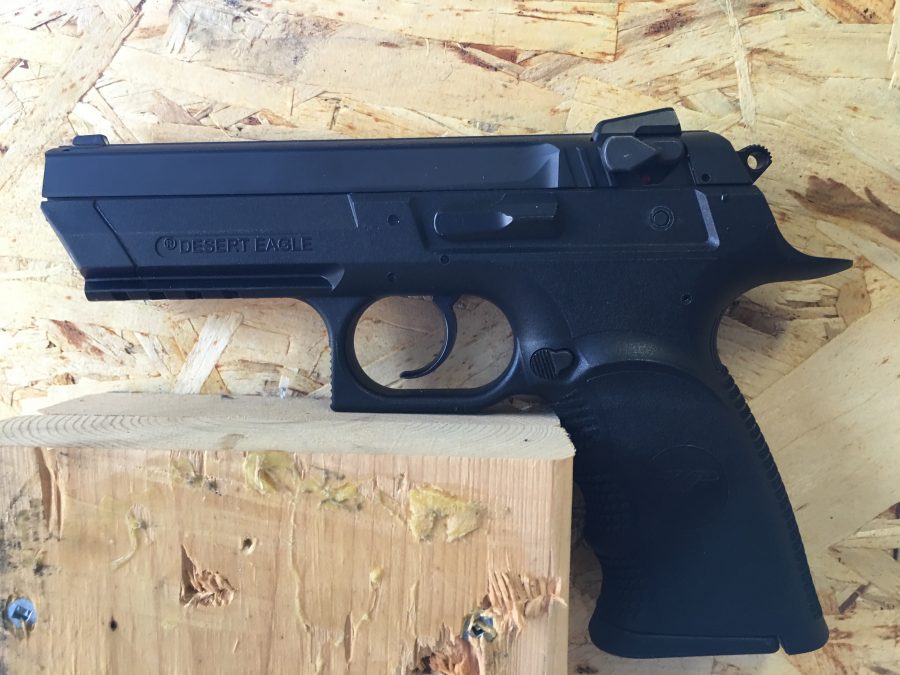 All that aside, if you want a reliable, comfortable, controllable .40-S&W-firing handgun, the Magnum Research Baby Desert Eagle III fits the bill. Perhaps not as well as the less-expensive .40-caliber IWI Jericho PL with its frame-mounted, sensibly designed safety/decocker (a la CZ-75). But that’s a comparison for another day. For now, the BDE III is a perfectly usable, completely reliable “fotay.” How great is that?

The Baby Eagle is a pleasure to hold, but the slide stop’s too far away for small handed-shooters and the tiny, awkward safety/decocker “ears” makes it unsuitable for combat racking.

Spot on. In my case, ridiculously so.

The Baby Eagle III can be purchased in polymer or steel frame, full size or semi-compact, and in 9mm, .40 S&W and .45 ACP calibers. This one, in .40 S&W, was tamed via weight, size, ergonomics and a smooth, quick-reseting single-action trigger. The awkward slide-mounted safety mars an otherwise stellar package.