Although it’s been on the market for a couple of years now, I’ve gotten quite a few “Do a PMR-30 review!” requests recently. So… a PMR-30 pistol review it is. Despite a relatively low MSRP, the Kel-Tec PMR-30 remains elusive due to production volume that has never come close to keeping up with demand. And who wouldn’t want an extremely lightweight, fun-to-shoot pistol with a 30-round capacity? Especially one that shoots an entertaining round like .22 Magnum and spits fire like a dyspeptic dragon?

The PMR-30 makes for an amazing bug-out-bag pistol, and I think this is what first attracted me to it. B.O.B., kit bag, woods/survival gun, truck gun, whatever. Admittedly I don’t even have a B.O.B. put together, but I still like the idea of it and the PMR-30 would definitely live in there if I did have one.

There probably isn’t a lighter full-size pistol on the market, with the PMR-30 pistol tipping the scales at only 13.6 ounces empty, .22 WMR (Winchester Magnum Rimfire, AKA .22 Magnum, AKA .22 Win Mag, CCI Maxi-Mag, Hornady V-Max ) is light ammo that takes up very little space. And the empty magazines weigh only 1.6 ounces. In fact, a loaded PMR-30 pistol with a loaded spare magazine (that’s 60 rounds) tip the scales at what most full-size polymer frame pistols weigh totally empty: 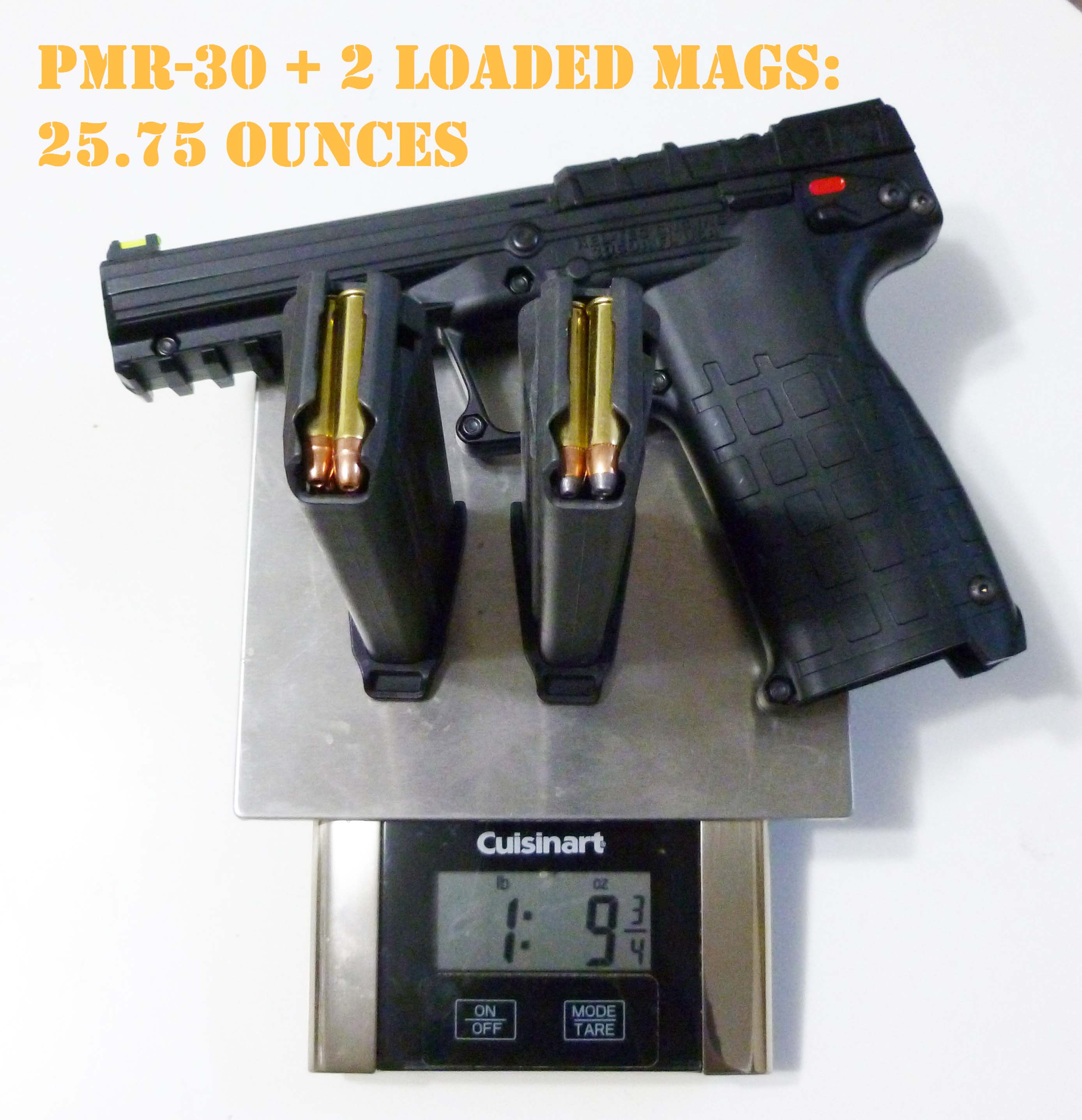 Weight and capacity are obvious draws, then. Then there’s the chambering. A lot of people call the .22 Mag the poor man’s 5.7×28, which is approximately true out of a rifle or carbine, with velocities for given bullet weights being extremely similar. However, the .22 WMR was originally designed for a 16+ inch barrel, and it loses a lot of velocity coming out of a pistol thanks to slow burning propellant. Sure, it’s much more powerful than a .22 LR – from a rifle it has more energy at 100 yards than .22 LR does at the muzzle – but from a pistol it’s down about 300 fps vs. 5.7.

This is changing a bit, though, thanks to the growing popularity of self-defense revolvers chambered for .22 WMR and of the single-action PMR-30 itself. For instance, Winchester now makes a PDX1 load in the caliber and Speer makes its Gold Dot, both of which are optimized for a short barrel. Up to 1,400 fps from a 40 grain bullet is nothing to sneeze at.

On the plus side, .22 WMR is readily available, stayed fairly available even during the Great Ammo Panic of 2013 and costs about $0.20 per round (historically similar in price to 9mm). On the downside, rimfire ignition isn’t as reliable as centerfire. If I had money to burn, my B.O.B. might have a Five-seveN and PS90 in it. But a PMR-30 and a carbine or bolt action rifle chambered in .22 WMR are affordable alternatives and the ammo is certainly much easier to find. Besides, I have four loaded mags which means 120 rounds ready to go, and they can all fit in one pocket without weighing me down. 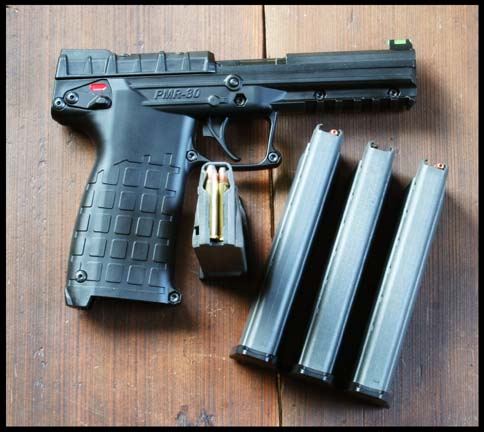 The oddity that is the PMR-30

This pistol is really quite confounding in multiple ways. It feels cheap, but isn’t. And I don’t mean inexpensive. I mean it feels like a chintzy, jankey toy. The plastic feels thin and makes hollow noises and the gun is so light that it’s almost silly. The frame is a two-part clamshell design, and has more bolts holding it together than Frankenstein’s monster.

Half of the slide is covered in plastic as well, so when you rack it you never even touch metal. While none of this makes you feel like you’re holding something worthy of being taken seriously or that’s likely to last more than a couple of range sessions, the pistol holds up to extended use.

The machining and finish of the metal parts, especially including the barrel, slide, and locking block for the hybrid blowback-locked-breech action (which is its own oddity), is very good. I have close to 700 rounds through my PMR without a single mechanical failure. Originally I had some ejection problems, but Kel-Tec redesigned the barrel and I have had no reliability issues since they replaced my old barrel (old ones were fluted) with a new one. If you have a PMR-30 with the fluted barrel, Kel-Tec will almost certainly ship you a new, upgraded one at no charge. Then there’s the trigger, which seems totally out of place. In a good way. It’s an extremely smooth, short, and crisp trigger weighing in at a consistent 3 lbs. even, and just feels crazy in what would be a ~$329 street price plastic Kel-Tec were they more available. Why is this trigger so freaking good!? Only gripe: the reset is mushy. You can’t feel or hear it reset. However, it’s totally consistent and the travel is short, with very little pre- or over-travel at all, so that reset click isn’t as important as it is on some guns.

Also making no sense is the BOOM and fireball emitted by .22 WMR out of a pistol, combined with a noticeable lack of recoil and muzzle flip. This thing is loud. Make no mistake – it sounds like you’re shooting a magnum revolver. But…no recoil. Barely more than .22 LR. It’s just plain weird and doesn’t jive with anything I have shot before.

Every time I have shot it at a range with other people around, they started looking over at about the 10-round mark, since they likely thought I was shooting a revolver, but it kept going. Then they really start looking at about the 20-round mark. Finally they’re all standing behind me as round number 30 flies downrange accompanied by more fire and thunder. Something about the BOOM and the 30 rounds without reloading attracts attention. .22 WMR is a solid choice for self-defense for those who are highly recoil sensitive. Just be warned: ear protection is your friend. Ergonomically, the gun is a little odd as well. Due to the rimmed cartridge, the magazines are basically triangular – wider in the back than at the front. So, too, is the grip. This is unusual, but fairly comfortable. What may not work for some shooters is the size of the grip.

The .22 Mag is a long round, and that makes the grip fairly large front-to-back. It isn’t particularly thick, but if you have small hands it may feel like you aren’t getting full purchase because of that front-back distance. Thin at the front and wide at the back, combined with the front-back length, definitely give the PMR-30 a unique feel in the hand. This isn’t a negative; it’s just another little PMR oddity.

A Euro-style heel magazine release, fiber optic sights front and rear, and provisions for mounting an optic round out what I would consider to be ‘odd’ in an American-made pistol on the low end of the price scale. This thing is a blast to shoot, and I found it fairly accurate. It certainly likes some loads more than others, but you’ll have to watch my video to see how it faired. I forgot to bring paper targets with me on my testing day, so I set up the camera on one of my steel targets and you can see the hits on video. Respectable groups from the 30 grain V-Max and the 40 grain Armscor, and all over the place from the 40 grain Maxi-Mag.

If anybody really cares, I’ll swing by the indoor range and set up a 25-yard target and slow fire from a sandbag with a few brands. Suffice it to say, though, that it’s more than accurate enough for defensive purposes against anything large enough to harm you, and just accurate enough for hunting varmints and small game.

The sights are good. Certainly very easy to pick up. The trigger: awesome. Manipulating the slide is slightly difficult because of how thin it is – there’s not a lot of real estate to grab. Blasting through 30-round mags is pretty darn fun, and the low recoil and flip allows you to shoot as fast as you physically can and still keep hits on target. Very cool! There are two primary downsides that I can think of when actually using the PMR-30. The first is that the magazines are hard to load to 30 rounds. They do break in over time, but it’s still a lot more difficult than loading a 30-round AR mag.

At any rate, he was correct that it’s difficult to fully load them. After 15 or so Kel-Tec says you should smack the back of the magazine on a hard surface after every 1 or 2 additional rounds, which become increasingly hard to push into the mag. In fact, once you get to the last few it’s normal for the rim of the new cartridge to dent the body of the previous cartridge as you’re pushing it in – rimfire brass is thin, so it actually doesn’t take much to visibly dent a round.

My mags have now been used a fair bit and I leave them loaded, so I find it easier now. However, if I’m just plinking out on the range, I might only load a mag to 20 or 25 and call it good. My preference for equipping a B.O.B. would be to own quite a few magazines and keep ‘em full (they run about $24).

The second downside is the nature of rimfire ammo. Rimfire primers aren’t as reliable as centerfire primers and I have come to expect a dud relatively often. Not as often as with .22 LR, it seems, but I’m still not surprised to run into a dud every 200-300 rounds or so.

This gun can fill a lot of roles, from hunting and survival to really fun plinking to great zombie apocalypse and bug-out-bag pistol – especially combined with a rifle of some sort. Sub-MOA .22 WMR rifle, PMR-30 on the hip, and a couple thousand rounds of ammo (2,000 rnds of 40 grain .22 WMR = 18.3 lbs) in a pack? Sign me up!

Accuracy: * * *
Definitely likes some ammo more than others. Respectably, but not impressively accurate with the right flavor.

Ergonomics: * * *
A bit awkward but not uncomfortable. Manipulating the slide is slightly difficult and the heel mag release is something we ‘mericans aren’t particularly used to. I find the safety lever to be slightly too far back towards the rear, and its small and rounded shape makes it hard to manipulate easily with my strong hand thumb.

Reliability: * * * *
Since the barrel redesign, mine has been completely reliable for me. It has never had a FTF or FTE. However, one star dropped due to the chambering. Rimfire ammo is not as reliable and I do run into dud rounds more often than I’d like.

Customize This: * * *
Optics-ready is a plus and Kel-Tec sells a couple accessories like an extended barrel w/ muzzle brake. Picattiny rail means lots of end user options (a red dot comes immediately to mind). Various holster choices are out there.

Utility: * * * * *
This is where the pistol really shines. Light weight, high capacity, decent accuracy, decent chambering all lead to a gun that’s great for many scenarios from fun days at the range to horrifying zombie attacks.

Overall: * * * *
This is one fun gun. It’s also a good kit gun. If only it were more available. There are so many ways to enjoy it and get utility from it, and it’s a sweet shooter to boot.