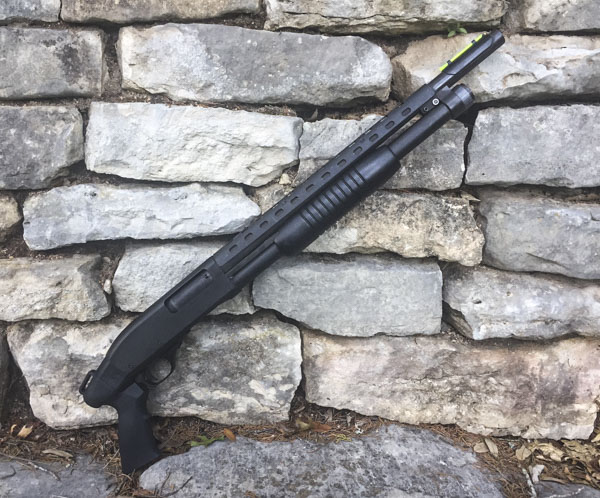 I was wandering through my local gun store the other day and saw a pistol grip 12 gauge pump with an 18.5” barrel with Hawk 981 stamped on its side. I like to think I’m fairly up to date on firearm manufacturers, but had never heard of Hawk. A quick Google search and I learned the IAC Hawk 981 is a Chinese clone of a Remington 870. When I saw it was Chinese I was turned off. I know Norcino makes a good AK, but that’s about the only thing I know about Chinese guns. I’ve owned a variety of foreign-made firearms; German, Russian, Croatian, Italian, Swiss, Israeli, Romanian, Turkish, Czechoslovakian and Slovenian. So I have no problem putting my cash down for an import. For some reason, though, buying a Chinese gun just felt wrong.

Then I checked the price tag. A very reasonable $125 American dollars later and I was the skeptical owner of a Chinese gun that I would probably hide from my gun friends. I took the Hawk home for closer inspection. The machining looks pretty good, especially when you consider the price tag. The metal used on the internals is definitely a low-grade soft steel. The finish isn’t great, but it’s more than acceptable. The Hawk also takes 870 parts and accessories, except barrels which is not threaded for chokes.

I briefly considered switching the furniture to Magpul but realized doing that would more than double the cost of the shotgun. It seems kinda stupid to spend $140 on a stock and forend for a shotgun that cost $125.

Normally when I buy a new gun I can’t wait to get it out and shoot it. Frequently I head to the range immediately after I pick it up, but I had no real desire to shoot my new 12 gauge.

So why did I buy this thing? Honestly it was an impulse purchase. I have no real need for it. I figured at least I could put it in the trunk of my car for a just-in-case gun.

But then I got to thinking. Could I trust a cheap-o Chinese pump in a “just in case” scenario? After having the Hawk sit on my dinner table for about two months (sorry, Emily) I finally decided to take it to the range. Actually, I decide to take my new CZ 75 Omega to the range and brought the Hawk along just for the hell of it. I threw some 00 buck and dove shot in my range box and set off. Shooting buckshot from a pistol grip shotgun isn’t what I’d call fun. The Hawk’s pistol grip is rather thin at the rear which causes a sharp pain in your strong hand when firing. I’m not recoil shy at all, but putting buck through the Hawk is downright unpleasant. After dumping the five round tube as fast as I could I almost said that was enough. Shooting five rounds isn’t near enough of a test to qualify this thing a gun as “just in case” ready, but I switched to dove loads. With the lighter loads I was able to ignore the recoil and focus on the gun.

The trigger isn’t great, but acceptable. It’s smooth enough and short at least. The pump action didn’t have that satisfying feel that most pump actions have. The action didn’t feel very tight, the action bars felt as if the were scrapping the inside of the receiver.  The traditional push button safety has a very tactile feel. Honestly everything felt about how I expected it to. I was happily blasting away at the boxes and really enjoying myself. Then I experienced a failure to eject. I had cycled the forend all the way to rear with authority like every other shot, yet the shell was just sitting there inside the gun. A failure to eject in a pump action shotgun is something I have never experienced. I was a little disappointed but for $125 what do you expect? After inspecting the ejector I found it to be under almost no spring pressure. I had left my ejector pressureometer at home so could only guess that the spring pressure was around 3-4 pounds. The weak ejector was clearly the problem. A problem that persisted at random throughout the next 40 or so rounds.

Aside from a weak ejector the gun functioned just fine. It feeds perfectly and has a decent trigger. Having ejection issues is a huge problem, though, especially for a gun that’s built to function as a home defense shotgun. Sure the sound of a racking 12 gauge may enough to scare off a bad guy, but that’s not enough to rely on for home defense.

I have owned unreliable guns before, I think they are useful for training new shooters in remedial action. I don’t mind a minor hiccup every now and then with a gun that is strictly a range toy. The Hawk is not a range toy because its unpleasant to shoot. I can’t use it as a “just in case” gun because I just don’t trust it. It’s not worth selling, so what do I do with it? Should I have the ejector fixed? I have no affection for this gun so I just cant justify spending the money or time on fixing it.

Honestly I don’t know what to do with this gun. It willll probably end up at the back of my workshop/gun room and rust away. I’ll stumble across it a couple of times a year, clean it up and put it away again. The Hawk is destined to live in gun purgatory for the rest of its life. I’m not a gun snob — I love a reliable gun that is within most people budgets — but the Hawk isn’t that.  Basically if you want a Remington 870, you should probably buy one

Ratings (Out of 5 stars)

Ergonomics: * * *
The pistol grip is functional, if not comfortable. The forend does its job. The safety is easy to reach as is the pump release.

Customize This: * * * *
Lots of options because 870 parts will work in the Hawk (except barrels for some reason).

Overall: * *
Its affordable, made of soft metal and fairly unreliable. Oh well.