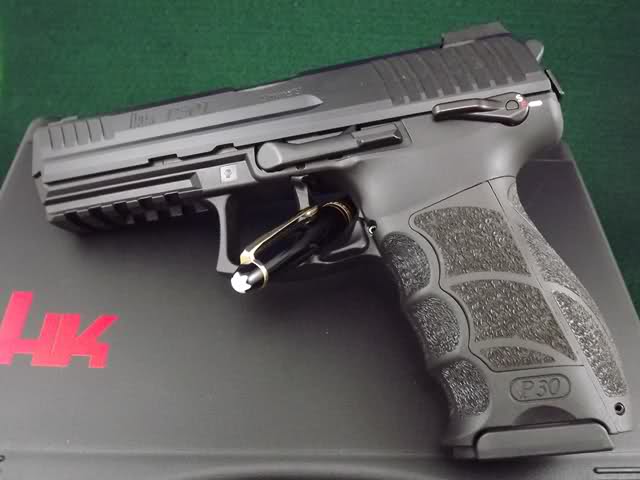 At first I was going to succumb to the Glock gods and indoctrinate myself like the tens of thousands of others who buy a reliable polymer pistol. But if the Glock 23 is the Toyota Camry V6 of pistols, I wanted something a little more towards the BMW end of the spectrum. Don’t get me wrong- that Camry is a wonderfully engineered vehicle. It’s just not for me. Enter the HK P30LS in .40 S&W. So what does double the price get you?  Let’s break down those letters. HK still stands for reputable build quality – even if HK hates you and you suck (Google the last six words, noobs).  The P30 is the latest version of the P2000 pistol that’s been around for the past decade.  The L stands for the long slide option so the barrel grows from 3.86 to 4.45 inches. Finally the S stands for safety. And who doesn’t like safety? . . .

Yep, I wanted to test mine with all of the options available, and ‘no external safety’ guys be damned. Call me crazy, but I enjoy the additional security of a dedicated safety switch. And this ambidextrous unit has the tactile feel of quality like a Hermes belt snugly hugging Karolina Kurkova’s waist. You know once the safety clicks off at the range you are in for something special. However, unlike Kurkova, once the belt comes off and you can see that something is missing (mainly a belly button) the HK wears the metal safety appendage nicely. The ‘S’ and ‘F’ are even labeled in the same HK typeset as some of their more famous military rifles. If for nothing than the cool factor. Along with the optional safety, I wanted to make sure this weapon could be as potentially confusing to the end user as possible, short of a Beretta where the safety engages after racking the slide. Hey- for the money I coulda’ gotta lotta Glocka, so why not go all out with the buttons and switches? After all, I am fascinated by a plethora of ancillary gauges on a car, so I chose the ‘Version 3’ HK which is DA/SA with a decocker on the left side of the hammer. Aside from the safety, the P30 really behaves just like a SIG or CZ counterpart, but the button press of the decocker is ultra-positive. What’s a little disconcerting, though, is the way the hammer almost seems to smash back into its home. The decocker instills the same confidence as Carly Rae Jepsen asking out a cute guy. I don’t decock in my holster and I make sure the muzzle is in a safe direction.

BUT, there is no real reason to decock with the safety. For me, it’s just carry cocked-and-locked, 1911 style. Any doubts left about the sonic signature from the decocker is handled by a safety that seems to stop the trigger like Jon Jones bouncing Betty White from the Youth of MMA meeting.

Carrying with the hammer up never gives me the willies – as long as the safety is engaged. Ever carry a 1911 and notice the safety got snagged by clothing and was unintentionally disengaged? It’s happened to me. I am actually more comfortable carrying the safety-equipped HK cocked-and-locked than a traditional 1911.

Which is a good thing because the HK’s double-action pull is like a Cialis overdose; long, hard and seemingly never-ending. My RCBS scale goes to eight and my guess is the double action pull weight is 13-14. Or more. Single action’s fine, coming in at just under 5 pounds, but it’s still a long way to travel and the reset is tough to find. Everything else about this gun rules as a go-to-war weapon…except the bangswitch. For this amount of coin, it should be better from the factory. A lot better. Maybe not perfect, but better than this. You know what – maybe perfect after all. Because the rest of the gun is phenomenal. It’s built like a tank. It also comes with a set of small, medium, and large palm inserts and backstraps. I ran everything small because that’s how I roll and my minuscule hands loved it. It also eats different brand of ammo I can find, kinda like John Pinnette at the Borgata buffet after his act.

I thought I wouldn’t like the magazine release being in a place where God and John Moses Browning never intended it to be. But the mag drop on the sides of the trigger guard (think Walther P22) work very well. I also like the serrated slide that has that ‘just right’ feel when you yank back on it- not so aggressive as to cut you, but not so smooth you’ll lose your grip if your hands are sweaty. Or bloody. I also really love the sights on the P30. I have a few guns with Trijicon night sights, but the HK sights just work better for me. The dots are larger in diameter, the highlighter-yellow color is right and even if there’s no fancy radioactive material in them, they still glow nicely in the dark after being exposed to light.

Accuracy?  Of course, it is an HK. But I couldn’t confirm my groups being any tighter (or looser) than my trusty 1911. The .40 is described by some as snappy, and this gun in 9mm might well eek out a bit more paper-punching accuracy from an end user. But combat accuracy is well beyond anything you’ll need it to be.

Oh and there’s a rail so you can add on all the tactical goodness your ninja heart desires.  Mine is wearing a Crimson Trace RailMaster. Review on that to come….

The HK P30L is the honey badger of pistols. It eats anything. It’s built like a brick shithouse. Larry Vickers can defend himself from Chuck Norris by sending 100,000 rounds at him at 400 yards continuously without a failure. It’s comfy to fire, yet cannot be menaced by the environment. All in all, if Rule of Law disappeared tomorrow, this would be my sidearm. But that trigger really should have been good right out of the box.

Style * * * *
Black plastic and metal work well, both for HK and Amex.

Ergonomics  * * *
The safety and mag release work great. The de-cocker could (should?) be more damped. But get thy trigger to a good smithy.

Customize This  * * * *
Right out of the box, you can adjust the grip to fit your hand. Then there’s all that rail space.

OVERALL RATING * * * 1/2
The Lionel Richie of handguns. Talented. Versatile. Smooth. Black. Great Lineage. Great Performer. Full of Soul. So why is the trigger so very Nicole?