Putting together an AR-15 lower receiver isn’t all that hard. Here are some instructions for assembling your own AR-15 lower by yours truly, for example, just to show you how easy it really is. But for the less mechanically inclined among us, that may not be an option. Thankfully, for people who don’t want to assemble their own lower but still want to be able to build their own custom rifle, Franklin Armory has just the ticket . . . 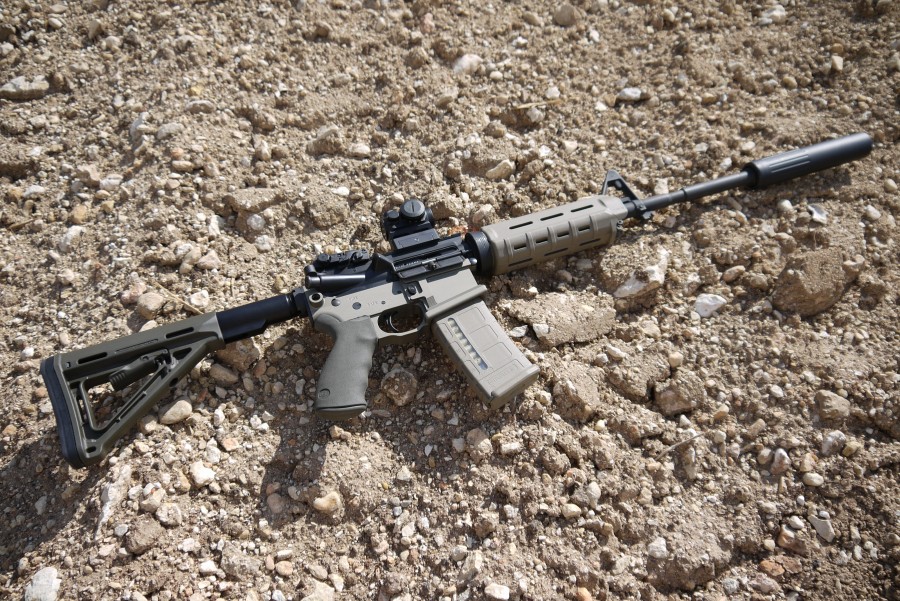 Quick overview time: the AR-15 platform comes in two halves, an upper and a lower. The upper consists of the barrel, handguards and sights. The lower, on the other hand, has the operating controls for the weapon, the trigger, and the magazine well. And while the actual “gun”-like parts are in the upper, it’s the lower that is legally the firearm.

Most people are content to buy the uppers complete, since putting on a barrel is slightly complicated. But something that’s gaining popularity is to buy a “stripped” lower receiver and put it together yourself. It’s a bit of a pain, but it gives you the option to use better components than are typically included in lower-end AR-15s. Franklin Armory’s built lower comes from the factory with all of the buttons and switches pre-installed, as well as Franklin’s own single stage trigger which is one of the finest single stage triggers I’ve ever pulled. Seriously, this thing beats the pants off the ALG Defense triggers with their Geissele tuned goodness — a clean, crisp break with no detectable creep and a very short reset.

The one thing the lower doesn’t normally come with is a stock (FA’s opinion is that you can buy your stock of choice on your own and save the hassle of swapping out a pre-installed model), but you can get one pre-installed as well if you really feel the need. While the trigger and the pre-installed gubbins are nice, the biggest draw for this particular product is the lower receiver itself. Franklin Armory designed this billet lower themselves and produce them in house. They have a bunch of nice features above and beyond the standard forged lower.

First things first: billet versus forged. Forged lowers are usually pressed when red hot and then machined into shape. Billet lowers are machined from a solid chunk of metal. There’s a belief that billet lowers are stronger and machined to tighter tolerances and this one sure lives up to the hype. The second you slide it onto the upper, you notice that there’s no moving or wiggling between the upper and the lower like you get in some of the cheaper AR-15s.

Speaking of features, the billet lower comes with a permanent trigger guard that’s been enlarged compared to the standard size, and an interesting cut along the side of the magazine well for the shooter’s trigger finger to rest. It’s a nice way to give the shooter some positive feedback that their finger is safely in the right position other than resting it on the magazine release. Another interesting feature is the QD mount that’s built right into the lower itself. This little hole allows the shooter to attach a single point sling directly to the lower without needing to change the backplate on the gun. It also keeps the sling attachment point away from the hand, which makes the gun much more comfortable. Plus, it just looks nifty.

Speaking of nifty features, the front of the lower has some stippling on it which helps when using a “magazine well” grip on the gun. I could take it or leave it, but its an interesting feature nonetheless. The other nice feature is an exaggerated flared magazine well. The idea is to give a larger target for the shooter to hit when trying to slap a new magazine into the gun, and while the flared well does help, it isn’t quite as helpful as you’d imagine. And this is the only thing I really don’t like about the lower — the flare is too steep to really help guide the mag into the slot. Also, the edges are sharp enough to shave some of the magazine off each time it slots in. A little more slope to the sides of the flare and a little more rounding on the magazine well edges and you’ve got yourself a damn fine lower. So what’s my opinion of the Franklin built lower? I think its great. It’s a step up from the “standard” AR-15 lower with some great features of its own, and comes with a great single stage trigger. I really like it, and if I needed a new rifle, this would be what I’d use for its lower.

Ergonomics (Handling): * * * *
Not only does it fit well in the hand and have some great features that provide immediate benefit in terms of handling, it’s well thought out in giving you options for mounting points that won’t interfere with your grip. Fix the magazine well flare and you’ve got yourself a deal.

Overall Rating: * * * *
I said it before, and I’ll say it again: if I was building a new rifle, this would be the lower I’d pick. If they made a slight change to the flare in the magazine well this would be a five star review. As it stands it still beats the pants off my existing lowers. I wonder if they’ll give me a discount . . .

Full Disclosure: This lower was provided by Franklin Armory for the purposes of this review and is currently en route back to FA.

Special thanks to Dutra Arms in Spring Branch, TX for doing the transfer!