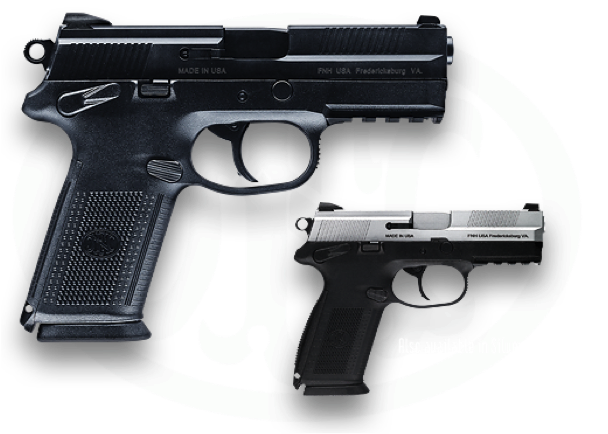 Having recently moved from magazine capacity-limited Colorado to small town in rural Missouri, I was naturally in the market for a new gun. My first week in town I was checking out the two local Ma and Pa Gun ‘n Pawn shops and lo and behold one of them had a brand new FNX-9 I’d been eying. And it was a bi-tone! And better yet they offered me a fair trade-in value for my Glock 19 Gen 3 that I never really liked all that much (though I ended up keeping it). I did have to get over the ironic fact that this FNX was equipped with three 10-round Second Amendment-restricted magazines, but I rationalized I could easily ditch them on Gunbroker for near the cost of standard 17-rounders so I took the plunge . . .

When you purchase the FNX-9 it comes in a nice case with the obligatory swappable backstraps, cable lock, user manual, and three magazines. I was most satisfied with the three mags. I’d trade all the throw-ins (holster, mag holster, speed loader, cleaning rod) that some of the other companies offer for a third magazine any day.

One of the first things I noticed when handling the FNX is the very aggressive texturing on the grip; not abrasive or uncomfortable but definitely gives an impression that this baby won’t slip. The texturing sure beats the heck out of some of those grip stickers people put on their handguns (myself included).

There was nothing surprising with the layout of the controls, which were similar to most polymer hammer-fired handguns. It also disassembles easily, so anyone who has disassembled a modern handgun won’t need to flip through the manual. The biggest difference compared to some others is that the paddle safety also functions as a de-cocker if you press it all the way down.

I like the option of having both controls and it was never a problem for me drawing from the holster and flicking off the safety from a cocked and locked position. My sister, a new shooter, had some confusion with it. If I handed it to her with the safety on she would inadvertently press all the way down and, in the process, initiate the decocker. She would be quite surprised at the double action trigger pull wile expecting single action. While that has never happened to me, I wouldn’t discount the possibility of accidently decocking the hammer in a panic defensive gun use situation. This is just something to be aware of and a reason to practice firing double action as well.

Accuracy Testing
I really like shooting this gun. Upon side-by-side testing along with my GLOCK 19, I shoot it more quickly and accurately as displayed on my unscientific backyard steel target. Mounting a laser to a rail and firing at 20 feet off of a backpack rest proves that the less unscientific results match up; it’s a pretty solid shooter. After two shooting sessions and about 100 rounds through the FNX I was just getting ready to consider putting my reliable GLOCK 19 up for sale and promoting the FNX to bedside duty. However, just before doing one quick shooting session in the backyard I had what I consider to be a pretty big failure. I felt something strange on my right hand, like an uncomfortable poke. I immediately stopped shooting, looked down at the gun and saw the right side safety completely gone and the retention clip for the entire safety assembly mangled and dangling.

Finding the ejected brass, it appears that the handgun may have fired out of battery…not good. Doing some Googling afterwards, I found a few other cases with similar stories reported on various gun blogs. The gun would still dry fire, but the safety/decocker was capable of sliding out of the left side with the retention clip missing. The turnaround with the FNX warranty department was pretty quick (2-3 weeks) and painless. I received a vague work slip that listed replacing missing parts and a full service of the gun. Since receiving the FNX back from FNH USA I have put another 100+ rounds through it and I keep asking myself how many rounds it will take for me to trust it enough for bedside duty. Or perhaps, as well as I shoot it, it will stick around as a range/competition gun. Good thing I kept the GLOCK 19 around. We’ll see.

Reliability: * *
While my example has been less than reliable as stated above, several other reviews I’ve read along with torture tests have shown it to be quite reliable. Mine may very well just be a lemon as spending an hour Googling my failure only yielded 2-3 similar reported failures.

Fit and Finish: * * * * 1/2
Great! At first the weight is so light that it feels cheap or flimsy, but everything is incredibly solid, with one exception, the safety/decocker lever. It just feels a bit subpar, especially on the right side for lefties.

Customization: * * *
Average, most of the aftermarket bits you’d need, but not much for choices.