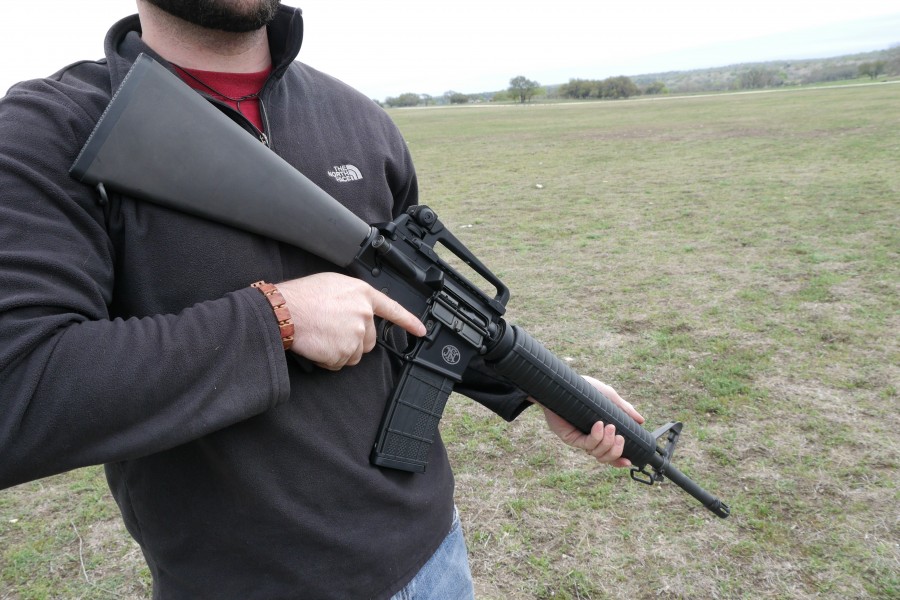 FNH USA is way late to the AR party. The FN-15 rifle was introduced earlier this year, well past the peak of the AR fever of 2013. You’d think the company responsible for manufacturing the military version of the M16A4 (and a large percentage of U.S. military rifles) would quickly tool-up to crank out civilian versions of the rifle. But that’s not the way FN rolls . . .

Due to legal restrictions and contractual requirements, the rifle you see here as the FN 15 is a completely different beast than the military version, made on different machines that just happen to be in the same vicinity of the company’s M16 manufacturing. Despite FNH USA’s reputation for cold hammer forged awesomeness in their barrels, the FN 15’d barrel is button broached and chrome lined – just like its military counterpart. I’m no gunsmith so I can’t really say what is better or worse. The general consensus: if you’re looking for barrel longevity, go chrome lined. If you care more about accuracy, and full auto isn’t in the cards, then go for a non-chrome lined barrel.

As you can see in the pictures, the FN 15 is the “big boy” version outfitted with the fixed A2 butt stock and a 20-inch version of the aforementioned barrel. This version is quite a bit larger when compared to the much shorter 16-inch barreled and collapsible stock equipped M4 carbine edition of the same gun. This is as close as you can get to a “M16-esqe” rifle without actually joining up with your uncle Sam for a few years to travel the world, meet interesting people and kill them.

Mall ninjas who grew up shooting an AR with a collapsible stock and everything but a Mr. Coffee hanging off a quad rail won’t recognize this gun; it’s a retro-modern version of America’s Rifle (née ArmaLite Rifle). The FN 15 has all the pieces that made it to the later versions of the M16 fielded in Vietnam, save the rounded two-piece hand guard (the VC-fighting version was triangular). The FN 15 is a handsome beast, in a military minimalist sort of way.

While most AR buyers turn-up their nose at an A2 stock, it’s perfect for the majority of shooters. For buyers serious about shooting, the A2 stock provides a repeatable straight line slightly higher than the bore, enabling an utterly consistent cheek weld. Women, children, room clearers, plate carrier wearers and those not of “average” size need not apply. For me, the A2 is an ideal compromise between strength, weight and ergonomics. And it doesn’t catch my operator beard like an M4 stock.

Out front, there’s enough hand guard to run your hand close in (as below). You can do it middle-of-the-way like your daddy taught you, or all-the-way extended Chris Costa style. The end of the barrel is about another six inches beyond that. Yes boys and girls, that is a 20-inch barrel as God and Eugene Stoner intended. The extra four inches over your typical carbine barrel result in slightly higher muzzle velocities, something we can all appreciate. Truth be told, 5.56 NATO rounds need all the help they can get. The rifle ships with M16-style iron sights: a fixed A2 front sight post and a removable rear carry handle integrated rear sight. Nick uses a similar set-up for his NRA High Power competition rifle with a permanently attached A2-style upper receiver instead of the detachable carry handle of the A4-style (shown here). A nice length of rail-encrusted real estate lives under that carry handle. It’s perfect for mounting your optic of choice, though that fixed A2 front sight is going to be there whether you like it or not. Note to newbies: find a gun like this and learn how to shoot with iron sights. Then go rail crazy.

The FN 15’s accuracy is hindered by the hand guard. Like the military version, the FN 15’s hand guards are mounted to the rifle using a delta ring attachment. This puts the hand guard in direct contact with the barrel. In most cases, any pressure on a rifle barrel forward of the chamber will impact point of impact – especially when you’re shooting off bags or using a sling. The FN 15’s delta ring system is a definite step down in accuracy from a free-floated hand guard. Which is why Rock River sells a DCM legal kit to solve this very problem.

The FN 15’s fire control aspects are mil spec. You’ve got your right-handed safety selector and a standard magazine release right where you’d expect. No B.A.D levers or ambi short throw safeties on this gun. High speed operators and left-handed people will surely hate this set-up. Given that I’m right-handed and decidedly low-speed, high drag, I wasn’t bothered by the controls’ placement.

The FN 15’s trigger is mil spec in the worst sense of the term. It feels like every trigger I ever pulled out of the budget bin lower parts kit bag that I promptly threw out in favor of something, anything nicer. It breaks at around seven pounds. The trigger pull is as draggy, creepy and long as Dr. Frank N Furter. Once the trigger breaks, you can rest easy knowing that the reset point is ahead of you, somewhere, announcing itself with a loud reset. The FN 15’s trigger is fine for combat. Not so great for civilians. To check out the FN 15’s capabilities, I removed the detachable carry handle and mounted a big honking piece of Leupold glass. At 100 yards, with both the front and rear supported (yes that’s a bag of corn) and unlimited time to work my way through the trigger, I managed to squeeze off a few groups.

Did I mention that Nick loaned me this whole setup (rifle, scope, and ammo) so I could be a hero just for one day? I think the FN 15 is capable of a lot more than what I achieved. At a minimum, I would have liked some more time to try out some different ammo. Unfortunately, this is Nick’s personal gun and given our tumultuous history of property destruction recently, he’s hesitant to hand over the goods. After much tribulation, using 69 gr. Winchester Match, I produced this five-shot group: Using OnTarget, I measured this group at 1.060 MOA. As a point of reference, that piece of 300 BLK brass is ~1.365 inches long. Which means the FN 15 is more accurate than the Armalite M-15 rifle we tested a while back, but still not “knock your socks off” level of accurate. Again, more time with different ammo might have yielded a better result. But a hair over 1 MOA is perfectly acceptable.

That said, shooting the FN 15 offhand will open up this group. Considerably. I mentioned the main accuracy issues above: a lack of a free-floating tube for the hand guard and that trying trigger. These two design choices created a rifle that’s not able to perform up to the barrel’s capability. Compared to the competition, and by that I mean ALL of the AR 15s on the market, the FN-15 rifle isn’t a standout winner in any category. The 3-gunners and tactical crowd will shun it for its lack of ambi controls, rail space, a collapsible stock and/or an assisted reset trigger. Guys like me, who love a practical historical piece in the safe, will smile fondly upon the FN 15. Very few manufacturers make a 1990’s era M16A4 style rifle; those looking for a retro build (or to make something that looks like their old service rifle from the military) are usually out of luck. Until now.

If you’re looking for an AR-style rifle with the pedigree and sleek styling of that classic military rifle, look no further. Add a service rifle-legal hand guard and a suitable non-mil spec trigger to the FN 15 , and you’ll have yourself a practical, accurate, well-built piece of ballistic nostalgia in your collection.

Accuracy: * * * *
I shot my “best” group using a mega-large piece of glass on a smooth day, at 100 yards, with a supported rifle. Fix the trigger and further tweak things with a new hand guard and you’ve got a real shooter on your hands. Otherwise, not so much.

Reliability: * * * * *
I spent an evening with the gal. Nick reports that he’s experienced zero failures since taking possession of the FN 15 in March.

Customization: * * *
Slap whatever dumb accessory you want on the gun; you’re basically dropping a wing on the back of a ’67 Mustang. The upper receiver has the Picatinny space for a proper scope.

Overall: * * *
While you can upgrade the FN 15 to compete with more accurate ARs, buy it for its looks, pedigree and rock-solid reliability.