My first exposure to a Daniel Defense DELTA 5 rifle was at the recent Government Training Institute – Legion Precision Rifle Course (see my reviews for Day 1 and Day 2 of the course). Joe Marler, priorly of the USMC and now Daniel Defense’s Law Enforcement Sales Manager, used a DELTA 5 in .308 for the GTI course.

I had only a brief, pre-course, glance at Joe’s DELTA 5, but I noticed later that the rifle seemed to be performing well – in terms of accuracy and handling – when someone, who knew the rifle, was firing it.

During the course, Joe and I chatted about a possible review of a DELTA 5, and in the end I got my hands on a DELTA 5 chambered to 6.5 Creedmoor. To me, however, the biggest benefit of the DELTA 5 being based on an AR bauplan is the fully-adjustable stock. The stock on the review rifle came already set for a previous shooter, but I didn’t need to adjust it at all. I’ll discuss this more later, but my wife Frances – who is a tall woman with long arms – also fired the rifle, and we did not need to make major adjustments for her either. But the wide range of configurations available should accommodate the body shape and size of virtually any shooter.

The DELTA 5 comes equipped with a Picatinny rail with 20 MOA of elevation. 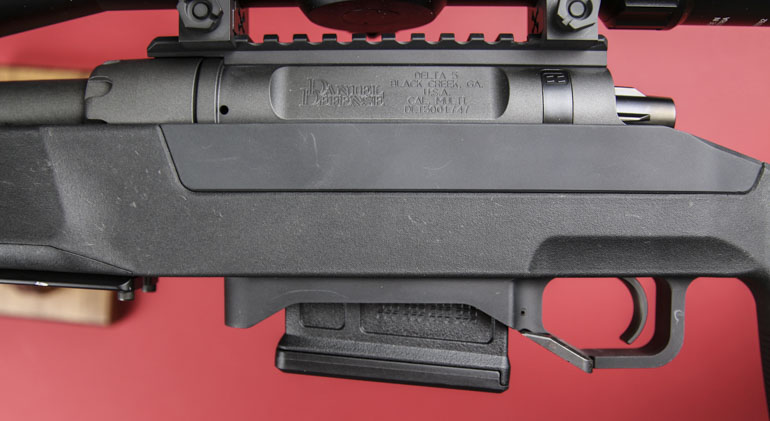 The rifle came with a Kahles K525i 5-26×56 riflescope already mounted. But everyone knows that a larger magazine makes for cooler photos, so Joe provided me with a 10-round magazine as well. I admit that I never used the higher-capacity magazine at the range, but it is more photogenic. Again, reflective of the AR-based design are the 12 MAGPUL M-LOK attachment points along the underside of the stock – 11 on the forend and one under the butt (far right in the photo). The DELTA 5 also has three QD sling attachment points.

That synthetic stock features aluminum pillar bedding for the action and a free-floated barrel.

The DELTA 5 also comes standard with a threaded muzzle for suppressor attachment, as well as a thread protector. The rifle sent to me for review came equipped with an Area 419 Hellfire Self-Timing Muzzle Break.

Daniel Defense also mounted an Atlas bipod to a DD Picatinny rail section on the forend. The ammunition chosen for the DELTA 5 analysis was Hornady‘s 140-grain ELD Match. Because we were going to be asking the rifle and ammunition to hit targets located at distances of 100-700+ yards, we also carried along a LabRadar, Vortex Fury HD 5000 Laser Rangefinding Binocular, Vortex Razor HD 22-48×65 (Angled) Spotting Scope, Kestrel 5700 Elite Meter With Applied Ballistics and an Armageddon Waxed Canvas Optimized Game Changer Support Bag. While sighting-in the DELTA 5, we also took velocity readings with the LabRadar . . . …to get the most accurate ballistic solutions for the longer range shots. Once the velocity and distance data were available, I set up ballistic solutions using the Kestrel LiNK ballistic app ranging from 300 – 715 yards.

When Frances and I headed to the range, the plan was for me to be the shooter and Frances the photographer/videographer. Once we arrived and I started working with the DELTA 5, I realized that it would be a great first-centerfire-rifle experience for her.

To clarify, Frances had fired .22 rimfire rifles at paper targets and metal cans. She had never before fired a centerfire rifle, and obviously had never fired a rifle of any kind at targets located further than 20-yards or so away. Here are the notes I jotted down concerning the accuracy of the DELTA 5:

I am going to let Frances’ experience, performance and comments provide most of the feedback concerning the overall performance of the Daniel Defense DELTA 5 Rifle.

As stated above, this was Frances’ first time shooting a centerfire rifle. After repeatedly calling ‘impact!’ as she fired at increasingly distant targets, I asked what she was experiencing from the rifle, riflescope and rest.

Her answers were very insightful, because they weren’t coated with an ‘I know what I am doing’ attitude. She stated that she was amazed at how light the recoil was. In fact, she turned to me and grinned and asked why I came home with a bruise after a recent course at the Government Training Institute…

She went on to say that it was amazing how clear the small targets were in the riflescope, even when they were as far away as 715 yards.

We were both extremely impressed by the DELTA 5’s performance. We consistently connected on our shots at distances out past 700 yards (I missed one at 500 yards and she missed one at 700 yards).

Those results speak for themselves. The DELTA 5 (paired with the Hornady ammunition) was extremely accurate at the long-distances for which it was designed.

Daniel Defense claims the DELTA 5 is capable of .5 MOA performance. If you’re someone who loads their own ammunition for precision long range shooting, I have no doubt that’s true.

With apologies to Joe Marler and all the owners and staff at Daniel Defense, I’m more proud of Frances than I am of the DELTA 5.

Style * * * *
The DELTA 5 looks sharp…as sharp as a synthetic stock bolt gun can look. I lines on both the 6.5 Creedmoor and .308 model DELTA5 rifles with their carbon fiber reinforced polymer are pleasing enough.

Fit and Finish: * * * * *
The finish of the DELTA 5 is smooth, with none of the raised texture that I encountered in other carbon-fiber stocks. All of the metalwork was smooth and fitted tightly. The barrel features a Cerakoted finish that’s smooth and even. Both magazines slid into place with ease regardless of the attitude of the rifle, or which hand I was using.

Accuracy * * * * *
I don’t know if all DELTA 5s are this accurate, but this review rifle produced sub-sub-MOA groups for an experienced- and first-time shooter – all the way out to 715 yards. We’ll leave it at that.

Ergonomics * * * * *
At 9.5 pounds without a riflescope, the DELTA 5 is not designed to be lugged through the woods – at least not by me. But, that same 9.5 pounds provides excellent stability and extremely manageable recoil. The almost infinitely adjustable butt-stock and cheek-riser allow the shooter to fit the DELTA 5 to just about any body type. The rifle’s smooth action and “notched” 60-degree bolt knob were ideal for fast, easy cycling.

Overall * * * * *
The Daniel Defense DELTA 5 in 6.5 Creedmoor performed exceptionally well in the role for which it was designed – consistently striking targets at extreme distances. It did this both in the hands of a first-time centerfire shooter as well as those of an experienced shooter. The rifle’s design, including its adjustability and weight, provided stability and excellent ergonomics that helped both of us be consistent almost immediately.

Unless otherwise noted, all photos courtesy of Mike and Frances Arnold.