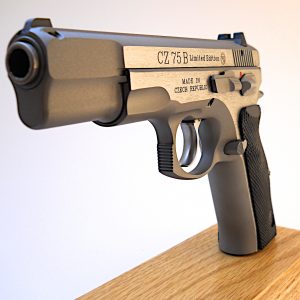 In 1949, SIG SAUER created the P210 semi-automatic pistol for the Swiss Army. Apart from production innovations, the P210 earned an enviable reputation for excellent recoil control. In terms of precision and reliability, the gun was the Glock of its day. In 1975, Ceska Zbrojovka released the CZ75. If you were feeling charitable, you could say the CZ’s slide-in-frame design echoes the SIG’s. More importantly, the CZ75 repeated the legendary SIG’s winning formula: a relatively heavy, heavy-duty sidearm that helps shooters place rapidly-fired bullets with unerring accuracy. With the success of their semi, CZ created a family of firearms, including various calibers, trigger systems and frame materials. The CZ 75 B is one of the best of the breed . . .

The CZ75 B Limited Edition is a matte stainless steel finished 9mm DA/SA (Double Action to Single Action) full-size pistol with exposed hammer and an upswept 1911 style beavertail. The look is all-business, with classic proportions enhanced by a gorgeous upwards arch in the lower part of the trigger guard.

The CZ 75 B variant sports an extended frame that’s one inch longer than the original CZ 75. This added support supposedly enhances accuracy and extends durability. There are reports of shooters running 75,000 to 90,000 rounds through the B without major repair or major parts replacement. And even more reports of shooters in love with the CZ 75’s ergos.

Shooters often argue about the relative comfort of various polymer pistols. Glock brick or Springfield subtlety? Once you wrap your hands around an all-steel CZ 75 B all thoughts of grip angle angst or finger positioning paranoia disappear. As does the CZ 75 B in your hand. The CZ’s ergonomic excellence is helped in no small part by the gun’s black rubber grips. They provide the ideal amount of firmness and thickness to bless the gun with superb ergonomic comfort. The 75 B shipped (yes past tense) with two chrome 16 round magazines 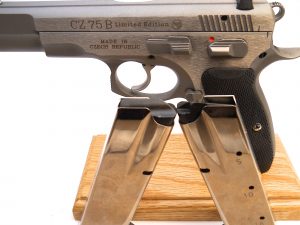 The CZ75 B uses traditional three dot sights. The Limited Edition’s Tritium night sights are standard, adding to the firearm’s appeal as a home defense weapon. 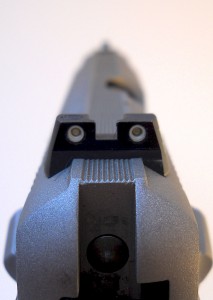 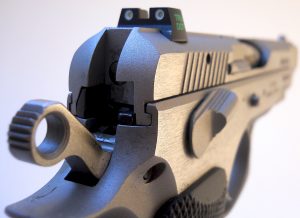 The CZ 75 B’s slide release and safety aren’t over-sized, but they might as well be. They’re perfectly positioned and snick into place with reassuring precision. That said, shooters with small hands might find the slide release a bit of a reach. Worse, the safety can only be enabled when the hammer is to the rear. Which pretty much means you can carry the gun any way you like as long as it’s cocked and locked.

Owners who carry a 1911 will be happy enough with the all steel CZ 75 B riding on their hip. Despite the fact that the gun has a 16-round double-stack magazine, it doesn’t feel particularly bulky. Heavy yes. (2.2. lbs.) Bulky no. Fans of John Moses Browning’s work will also be OK that this CZ variant lacks a de-cocker. To lower the hammer without firing, the manual suggests pulling the hammer and grasping the trigger with your weak hand to slowly and safely ride the hammer forward. Safety says otherwise. 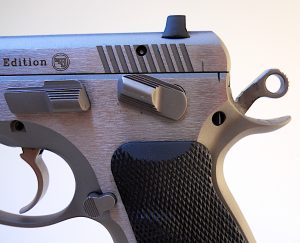 Takedown is almost as easy as dismantling a Lego tower. The photo above shows the two marks on the rear of the frame and slide. Align them, pop out the slide stop lever, release the slide and your done. 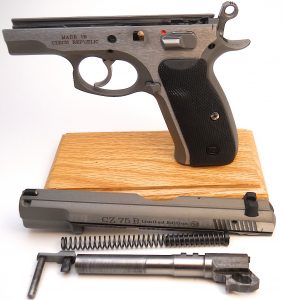 Disassembling the gun gives you an appreciation for the 75 B’s heft and sturdiness. The half length plastic guide rod is the only part which isn’t built like a brick outhouse. You’ll find the same half-length guide rod in the CZ 75 B’s big brother the 45acp CZ 97 B. Or not; plenty of owners swap it out for a stainless steel part.

To give the CZ a workout, I started by firing 16 rounds out of each magazine. True to form, the strings were both fun and fault-free. The CZ’s all-steel frame absorbed the 9mm recoil as if it were spitting out .380s.

The 75 B has a somewhat long, heavy double action pull with a slight amount of take-up. It weighs-in at eight pounds on my RCBS trigger gauge. In single action, the pull is a cleaner, crisper four pounds. Shooters comfortable with two different trigger pulls will find no issues with the CZ 75 B’s go pedal, which is at least as smooth and predictable as anything you can buy from SIG.

After initial functionality testing, I fired 124gr 9mm reloads, testing for print to establish where the rounds landed in reference to point of aim. The gun was spot on. 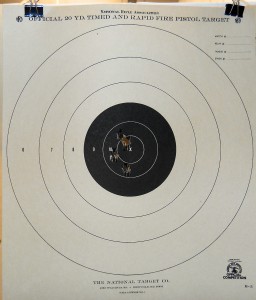 Impressed with the initial accuracy at seven yards, it was time for something a little more demanding. This time I loaded each chrome magazine with six rounds of 124gr 9mm and fired each rapidly with quick mag changes. 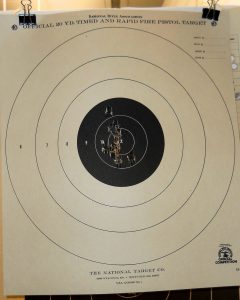 The next test was performed with the same 124gr 9mm reloads at 10 yards with 6 rounds.

Anxious to see how the CZ 75 B would perform with heavier loads, I fed it a magazine with six factory Federal 147gr 9mm rounds, and ran the target out to 15 yards. 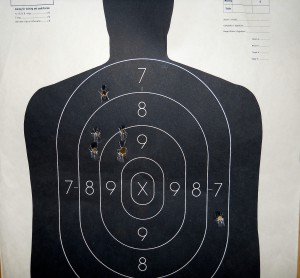 As you can see, the groups opened up at greater distances with a heavier load. I’m not sure  if this was me or the gun, though I knew right away I pulled the last bullet on the right of the target.

Though there was noticeably greater recoil with the Federal factory rounds, I loaded the other magazine with six rounds to take aim at the silhouette head at combat speed with the target at 15 yards. 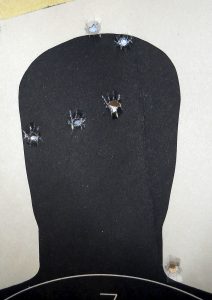 Again, this was not the group I was looking for. The last round was low and to the right which I knew as soon as I pulled the trigger. With more range time I could tighten these groups; I feel confident the pistol is more accurate than the shooter.

Bottom line: the the CZ 75 B is one of the best 9mm service type semi-autos on the market today. Did I mention that CZ discontinued the more expensive Limited Edition version in 2010? Or that SIG has started making the P210 again? What does that tell you?

Style * * * *
Though originally designed in 1975, the CZ75B Limited Edition with its bead blasted and brushed stainless finish will make this firearm stand out in any gun shop case. Add a set of the wood CZ logo grips and this would be a perfect 5 stars.

Ergonomics * * * *
The CZ75B feels better than any semi auto I have ever held in my hand including classic 1911s. The slide release and safety are simple and easy to use, but shooters with small hands might find the slide release a stretch. My daughter, who’s a slender 5ft 10in tall with larger than average hands finds it difficult to reach the slide release using just one hand.

Reliability * * * * *
The CZ75B performed perfectly with all brands of ammunition including my reloads. This included 115gr Blazer, 124gr custom reloads and 147gr Federal.

Customizable * * *
Equipped with tritium night sights and two 16 round chrome magazines CZ left no stone unturned in making this a complete service pistol or home defense pistol right out of the box. Though a set of CZ Custom G10 grips or CZ logo wood grips would push its looks over the top.

Overall * * * *
The CZ75B is very impressive and possibly the best 9mm service type semi-auto on the market today. A trigger job from the CZ custom shop would help smooth out that long double action pull but the single action break is a joy. A 75b is a great option for someone looking for a top quality alternative to a 1911 at a more affordable price.

[h/t to Darrell for trusting me with such a fine specimen. A version of this review first appeared at www.dayattherange.com]