Grab some CCI Mini-Mags and some tin cans, and meet me at the corner of style and functionality. So begins my review of the Bersa Thunder .22, a nifty little pistol with smooth lines and a low price tag, capable of providing hours of (relatively) cheap plinking . . .

Overview:
The Bersa Thunder .22 is an all-metal DA/SA fixed-barreled, blowback operated compact pistol of Argentinian extraction. Bersa, renowned for manufacturing high-quality pistols at affordable prices, is perhaps best known for the Thunder .22’s beefier cousin, the Thunder .380. The Thunder .22, aside from the chambering and a few other minor exceptions, is identical to the Thunder .380. All in all, it’s an appealing little package. Factor in the low price tag (I picked mine up a couple years ago for $239, plus tax), and the appeal only increases. 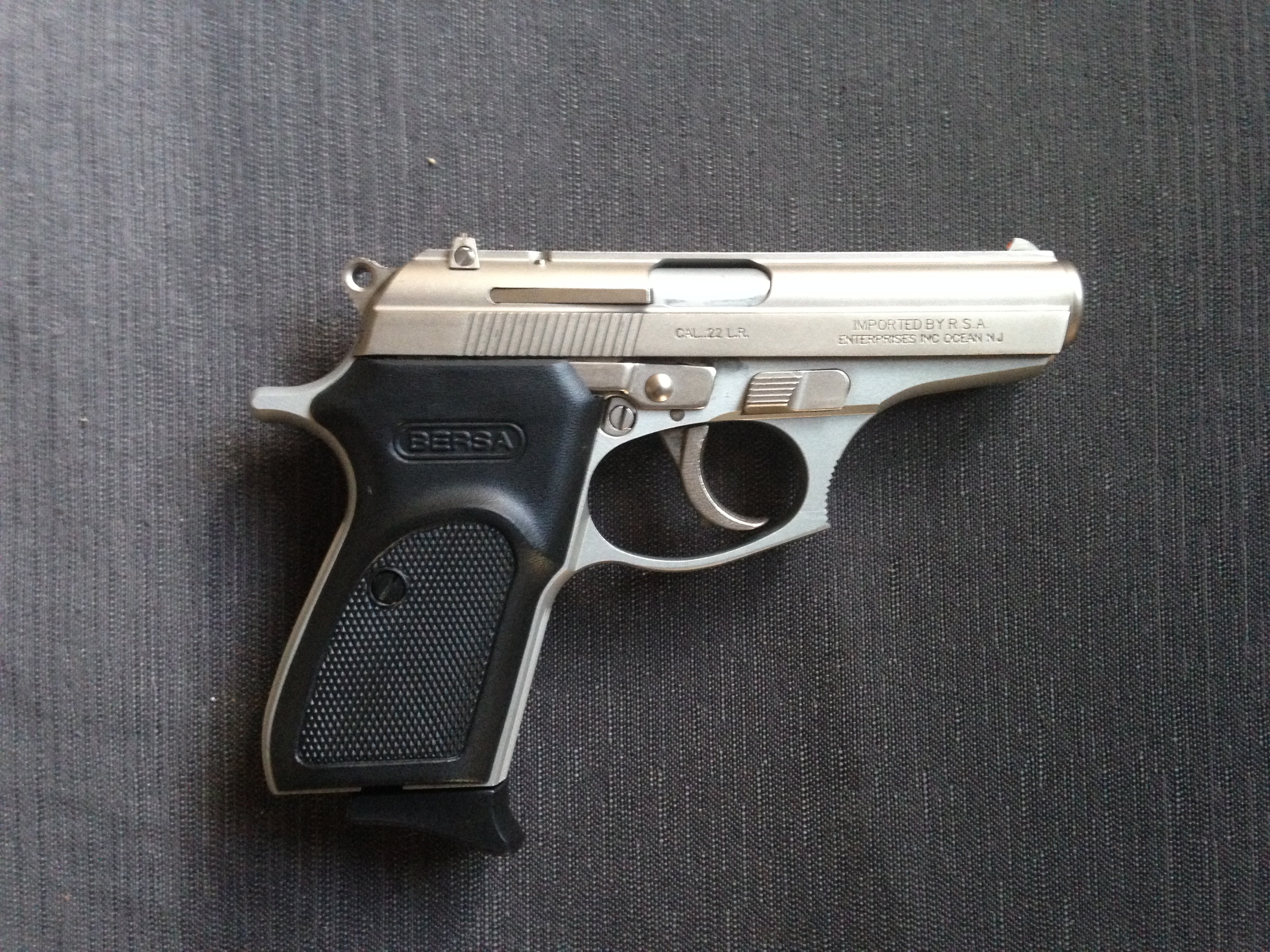 Appearance:
Bersa’s Thunder series is heavily informed by Walther’s legendary PPK series, and the influence is readily apparent. The pistol, especially its satin nickel iteration, evokes a slightly elongated PPK. The beavertail is a bit longer and slimmer in the Bersa, and the barrel is minutely (in the neighborhood of 0.3”) longer. The squared face of the trigger guard, while decidedly un-PPKesque, flows cleanly and naturally into the frame in a gentle, uninterrupted curve that is pleasant to behold.

The Bersa Thunder also has more doohickeys plastered on its frame than the PPK; specifically, a takedown lever, a slide stop, an exposed trigger bar and an integrated lock. So, a PPK it ain’t, but for all that, the Bersa echoes its fundamental lines. With its eschewal of sharp angles and its elegantly understated lack of ostentation, the Thunder .22 has the refined but businesslike aesthetics of a bygone era, the sort of classic cool that would go well with a tailored tux and a dry martini.

Features:
The pistol features an aluminum alloy frame and steel slide, and utilitarian black plastic grips. It ships with all the usual accompaniments: an instruction manual, one ten-round magazine, a “proof that we fired it and it didn’t explode” shell casing in a tiny manila envelope, a warranty card and a miniature Bersa key fob with an appropriately miniature key for the integrated trigger lock (more on that later).

The Thunder has small sights whose modest stature belies their inherent usability. Unlike some CCW-sized pistols that feature desultory, borderline-useless sights (every snub-nosed .38 in existence comes to mind), the Thunder features drift-adjustable three-dot sights. The dots themselves, while diminutive, are painted bright orange and easily acquired. 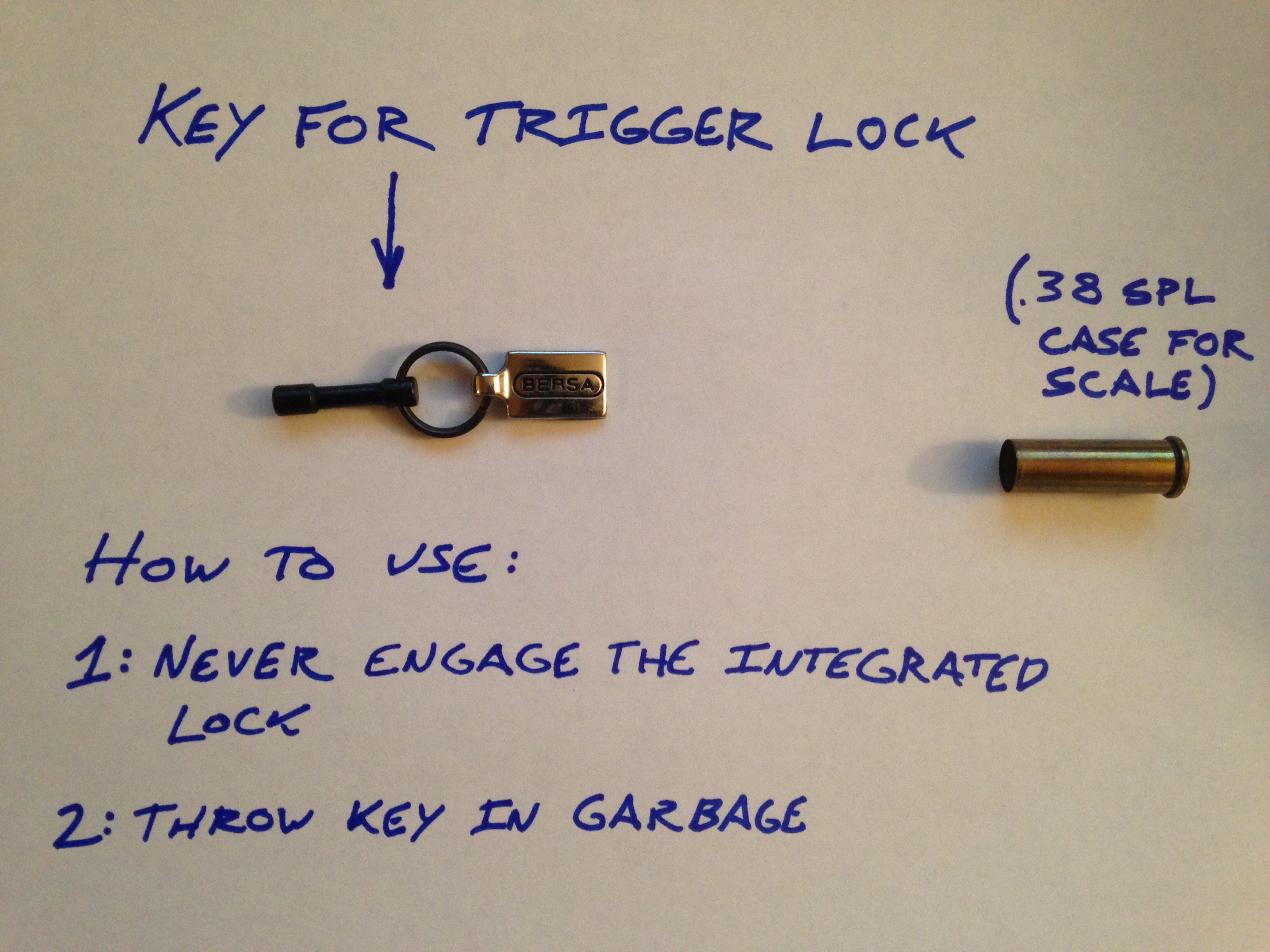 The Thunder .22 also has a number of active and passive safety features. Some folks may breathe a little easier knowing they’re there, others will simply quietly loathe them. I’m somewhere in the middle. I like the “drop-proof” firing pin safety, and I guess that the hammer block/trigger disconnect when the safety is engaged is cool, insofar as a DA gun having a manual safety in the first place is cool (I’d be fine with just a decocker, myself). More onerous is the magazine safety (could we just not?), and, of course, the integrated trigger lock (could we extra just not?). With a simple 90-degree rotation of the integrated lock, one can render the pistol inoperable, permanently so if you lose the key. I’ve gotten around this issue by never once using the integrated lock; thus far, my strategy has been a resounding success.

Ergonomics:
For an inexpensive, relatively small pistol, the ergonomics are very agreeable. The frame-mounted magazine release is nicely checkered and protrudes sufficiently to allow for easy engagement, but not so far as to encourage any “premature ejections.” The slide stop is positioned to allow for easy disengagement with a smooth downward sweep of the thumb (or, in my case, as a lefty, my trigger finger). The safety/decocker is also positioned for easy access by the thumb of a right-handed shoot. Lefties need not apply.

The slide serrations are deep but tiny; a mere 5/16” from top to bottom. This is one area where the .22 diverges from its .380 cousin; the .22, being a less energetic cartridge, requires a lighter slide. Bersa addressed this by giving the .22’s slide a rounder profile than the .380’s, which, while allowing the gun to cycle, leaves less space for serrations. Granted, the .22’s lighter recoil spring makes for easier manipulation of the slide, but even so, the Thunder .22’s slide provides the shooter with precious little to grasp onto. The front and rear of the grip feature vertical serrations that don’t seem to have any practical utility. It’s a nice touch, functionality notwithstanding. The grip provides enough space for a solid three-fingered hold; the supplied pinky extension on the magazine floorplate provides accommodation for any lingering digits.

Size-wise, it looms over a Beretta 21A, but is considerably smaller than a Ruger Mk. III. It’s definitely not a pocket-gun, but it could be carried comfortably and discretely in an IWB holster all day (if, for whatever reason, you favored carrying a .22 over the .380 version, which is the same size and only two ounces heavier).

The double-action trigger pull is long and heavy, but relatively smooth with some slight stacking before the break. The specs I have read indicate 7.5 lb DA pull, but I would be dollars to doughnuts that, on my pistol at least, the figure is on the verge of cresting the double-digit mark. In SA mode, there is about a 1/8” of slack before a light, albeit somewhat long, break. It’s not the best trigger out there, but it’s miles away from being the worst. For a pistol that retails for less than $250 new, it’s fantastic.

Performance:
The Thunder .22 may not be a competition-ready tackdriver, but it’s still capable of extreme accuracy. I’ve never benchrested it, but given the offhand groups I’ve shot with it, I’m confident that it’s more accurate than I am. You may not take home any medals with it, but you can, at reasonable ranges, dispatch bottles and cans with extreme prejudice. The minimal recoil of the .22 LR combined with the weight of the metal construction make for rapid follow-up shots. In my experience, reacquisition of the sight picture outpaces the reset of the trigger. Most (if not all) of the perceived recoil comes from the reciprocation of the slide. It’s pellet gun-soft to shoot.

The Thunder .22 is picky about ammo. Like a small child in the midst of a phase wherein he will only eat chicken nuggets – and only if they are in the shape of a dinosaur – the Bersa has its preferred flavors of ammo, and will let you know in no uncertain terms if it deems an offering unsuitable. It will cycle flawlessly all day on a diet of high velocity CCIs, and seems to digest Remington Yellow Jackets with no trouble either. But, like many .22 autoloaders, cheap ammo is the bane of the Thunder .22. When loaded with cheap bulk ammo, it will fire, usually, and cycle…occasionally. More often than not, though, the round will have insufficient energy to cycle the slide, leaving an empty casing in the breech, and requiring the operator to eject the magazine and manually cycle the slide, all the while swearing quietly. Splurge for the good stuff (if you can find it) and you’ll be fine.

Aside from the ammo-sensitivity, the only problem with the Thunder .22 is the slide stop. It engages positively but tenuously; insert a magazine too aggressively and the slide stop will disengage itself. I don’t know if this is an issue across the board, or if my pistol is just special, but take it under advisement nonetheless.

Final thoughts:
The Bersa Thunder .22 is a pistol that defies categorization. It’s a non-specialist specialist; a utility infielder. I’ve read other reviews that tout its usefulness as a less-expensive-to-shoot training platform for the Thunder .380 (though, in my opinion, the most difficult aspect of shooting well with the .380 is managing the recoil, which the .22 cannot begin to simulate), but I say to hell with rationalizing your purchase. It’s a good looking, well-constructed, good-shooting gun at a great price that’s damn fun to shoot.

Accuracy: * * * * 1/2
For what it is (a sub-$300, compact pistol), the accuracy is better than one should reasonably expect. Small sights and a short sight radius are the biggest limiting factors.

Ergonomics (carrying): * * * *
Carries like a small gun, handles like a bigger gun. All the controls are where they should be. Not designed with lefties in mind.

Ergonomics (firing): * * * *
Again, for a <$300 pistol, it’s fantastic, aside from a solidly “feh” DA pull. Its .22 LR chambering means virtually no recoil, and a long beavertail eliminates any chance of slide or hammer bite.

Reliability: * * * 1/2
Runs like a dream when fed its preferred flavors of ammo; absolutely shits the bed when fed the other 90% of .22 LR varieties.

Customize This: *
Nope. I think there might be some aftermarket wooden grips available, and Crimson Trace makes a Lasergrip for it. I’m sure there’s a holster or two somewhere out there as well, but that represents the width and breadth of one’s options. Lack of rails and a fixed, non-threaded barrel will no doubt disappoint the tacticool contingent.

Utility: * * * *
A little small for serious target work, a little big for last-ditch defensive roles. A minority of shooters might use it as a training platform for their Thunder .380s, and a smaller minority might use it as a CC. Others might find use for it as a trail or tackle box gun. For most, though, it’s a designated plinker. That being said, it excels in that role, while bringing some classic styling and an undeniable cool-factor to the table. Also a good platform for instructing new shooters.

Fun Factor: * * * * *
This is where this gun really shines. Just plain fun (and relatively cheap) to shoot.