As a small child, not even firmly in the double digits for age, my parents attended a conference for work hosted at the Broadmoor Hotel. To this day, I’ll never forget the bacon they served for breakfast. It was otherworldly in texture and flavor, no doubt wasted on my yet-to-develop palate. At the time, I didn’t fully understand the concept of a luxury hotel. All I knew was that the bacon was first class . . .

Over the years, thanks to parents who wanted me to taste the good life to instill some drive, and a day job that has forced me to travel to great American cities, I’ve wined, dined, and slept at some of our nation’s finest.

At various points along the way, I’ve felt as if I was playing dress up with other people’s money. On my own dime, my wife and I rarely reach beyond the Hampton Inn. Similarly, TTAG has afforded me trigger time with the finer ballistic things in life — without the financial commitment required to play in the big boy club. Never has that been more evident than my time spent with Bergara’s LRP Elite… Bergara (of Bergara, Spain) specializes in manufacturing precision firearms barrels. With Bergara Rifles (of Duluth, Georgia, USA), they aim to stick those barrels on receivers and stocks to create highly accurate rifles. Naturally, Bergara is happy to build you a custom rifle to spec, but their bread and butter is semi-custom rifles featuring precision button-rifled barrels, squared receivers and a stock of your choosing.

On the low end, you’ll find the B-14 Hunter,: a ~$800 rifle that sports a Bergara barrel, trued receiver and a pillar-bedded Walnut stock. The Bergara Premier Series (starting at $2190) is wedged between the B-14 and the high-end BCR series ($3000+). The Elite version of the LRP will set you back $2640. So what does five percent of median US household income buy you? 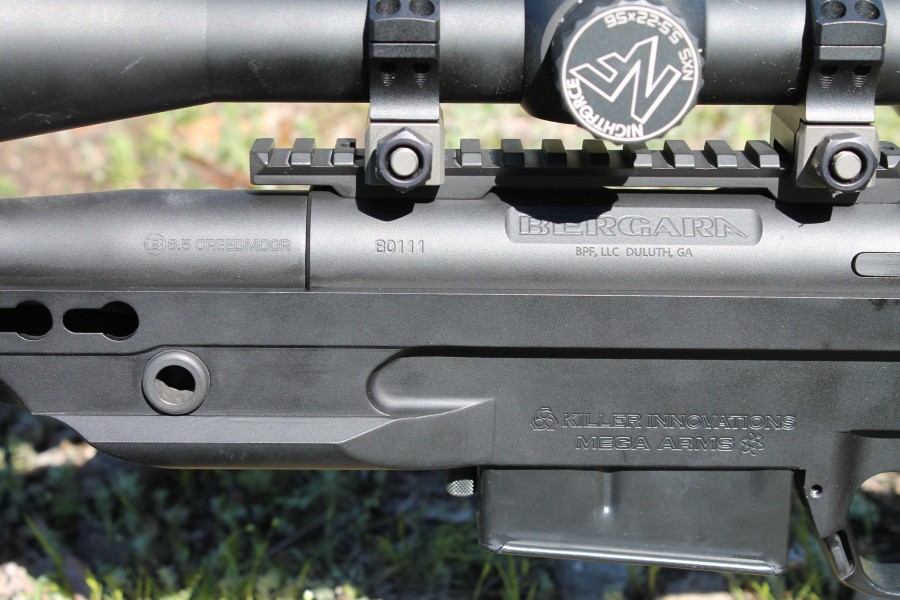 For starters, a parts list that reads like a who’s who of the firearms industry. Starting at the butt, there’s Magpul’s PRS stock, fully adjustable for length of pull and comb height. The LRP Elite’s PRS stock is the gold standard for reliability and stability in world of chassis fitted guns, and you’d be hard pressed to find a similarly equipped gun that doesn’t sport one. As we’ve come to expect from Magpul, it works well for the task at hand. While it isn’t adjustable for lateral offset on the cheek riser like a KRG or cant like a Tubb gun, it still works very well.

Moving forward, you’ll notice a generous AR 15 style palm swell. Made of rubber, grooved for your fingers and textured, the swell does a swell job of filling the palm; it works well for those that shoot with their thumb crossed over the back in a traditional grip, or off the right side if you happen to listen to the current crop of tactical rifle instructors. Bergara fit the LRP Elite with Timney’s flat faced trigger. It performs like every Timney trigger I’ve ever tested: zero takeup, a glass-rod-crisp break and zero overtravel. The factory unit tested was set at three pounds, though it can be tuned down to a pound-and-a-half or up to four pounds. I chose not to mess with it; three pounds is right in the sweet spot for a trigger meant for practical, tactical, or hunting usage. Above the trigger: Bergara’s Premier Action, built to the Remington 700 pattern specification. Craptastic this action is not. The bolt rides as if the pieces are made of oiled glass. There is very little slop even at full extraction. Running the bolt home is like shutting the door on a bank vault. Locking it like closing the door on a 7 series BMW. Bolt lift is smooth requiring a single digit to actuate. Fitted to the top of the action: a Picatinny rail with what appears to be a 20 MOA rail, perfect for stretching the elevation adjustment of today’s optics.

Forward of the receiver: Bergara’s stress relieved, button-rifled and honed barrel. This entire package is locked securely into a Mega Orias chassis that feeds from the included five round AICS magazine. (The Orias tested is one of the KeyMod varieties, though Mega offers it in M-LOK flavors as well.) Out front: a Dead Air Muzzle Brake that’s ready to go for the Sandman Series of silencers.

The sum total of the parts listed above is about $1350. Pull that out of the $2640 MSRP for the LRP Elite and you’re left with $1290 to drop on a receiver, barrel, buffer tube, grip and Picatinny rail. Given that most squared and trued Remington 700 actions will set you back north of $500 (much more if you’re feeling spendy), quality barrels blanks are at least that much, and getting a gunsmith to put it all together with some degree of care isn’t free, and you can see (if you squint just right) that <$3000 is the price you have to pay to put quality rifle components together. Bergara assembled top tier components into a shootable package. So it should come as no surprise that their LRP Elite is an absolute hammer. Shooting all manner of factory 6.5 Creedmoor ammo, my worst 100 yard five shot group off a bipod and a rear bag was ~1.5 MOA, loading Winchester’s 140 gr. SMK. I was only able to do that once. Most of the groups from that ammo hovered around 1.25 MOA. All of Hornady’s factory ammo from the 120 gr. A-Max to the 143 gr. ELD shot sub MOA for five shot groups all the time, every time. When I was chatting with the marketing team at Bergara, I made it clear that I wasn’t interested in a fresh off the rack rifle. I wanted something with some city mileage on it. The team didn’t disappoint. The rifle that showed up at my FFL was filthy, as evidenced by the muzzle brake you see above.

It turns out that I got their traveling demo rifle, the firearm that gets trundled around to dealers and distributors for exhibitions. Nobody could tell me how many rounds had been down the tube; I got the feeling that nobody really cared to figure it out.

Never once did I clean the LRP Elite, baby it, or give it any of the tender loving care that most people would give to a rifle that costs $2500+. Every group you see was shot hot and dirty, and it still continued to perform. I shot up a lot of TTAG’s ammo budget on this gun, The LRP Elite never gave me anything other than consistent sub MOA performance. For most of my rifle reviews, I’ve been stepping back to the 475 yard line (a convenient location under a big oak tree). As you can see, when I did my part, it was still boring, turning in sub-MOA groups. The one above was a personal best at a touch over 3/4 MOA. The rest were in the .8 to .9 MOA range. I walked the gun back to 660 yards which is more a test of shooter than rifle. As anybody who’s shot at 600+ yards will tell you, wind becomes a big factor. As you can see, I didn’t do the best job of working the wind, which was gusting from five to twelve miles per hour. That said, the slick little 6.5 bullets cut through the wind well. That lone guy out on the left side was the result of the wind dropping to basically nothing the second I broke the shot. I put up a 1.7 MOA five shot group in variable winds at 660 yards with factory ammo. Given what I saw in all the testing I’d done, I knew as soon as I went downrange to check my target that the LRP Elite had done its part. Try as I might, I simply can’t find fault with Bergara’s LRP Elite. Yes, it costs a pretty penny, and I anticipate someone will ask what this rifle does that a Ruger Precision Rifle can’t. To quote Supreme Court Justice Potter Stewart, “I know it when I see it.” The truth of the matter is that the RPR was accurate in my hands. And a hell of a deal at the price point.

When you want to start seeing consistent sub MOA groups in a shootable rifle, you have to pony up the money to make it happen. In this case, it costs about $2600 dollars to purchase an out-of-the box tack driver. Beyond that, the Bergara is miles ahead of the rest of the factory options when it comes to final fit and finish. Everything just clicks, and without knowing the price tag, it is apparent that you’re dealing with a rifle that required a good deal of man hours to finish out. A sterling effort.

Fit, Finish, Build Quality * * * * *
The attention to detail in finish was on par with the custom rifles I’ve had the opportunity to fondle, and the moving pieces slid together and locked up like the pieces in a finely-built German sedan.

Reliability * * * * *
What’s not to love about a bolt gun? The LRP Elite fed and fired flawlessly over several hundred rounds of mixed factory ammo, never once giving me trouble.

Customization * * * * *
With a Picatinny rail along the top, you’ll have no trouble fitting the optic and rings of your choice, and the Key Mod chassis allows the addition of any number of lights, laser range finders, and widgets you desire. As a demonstrator rifle, this one was fitted with the Orias Night Vision Mount ($99) that allows the forward mounting of NV illuminators. It’s the only thing you could possibly add.

Shootability * * * * *
While I’m not a chassis man myself, I can’t fault Bergara for selecting the Orias and PRS combo. I had no trouble fitting a bipod and shooting from prone, seated and kneeling. Barrier shooting was no problem as well. The Magpul PRS has a bit of a reputation as being heavy, and it does a good job of counterbalancing the twenty two-inch barrel sticking out the front. While I wouldn’t pick this as a walking and stalking gun, it is well suited for the intended purpose.

Accuracy * * * * *
Simply phenomenal. The worst group I ever shot was ~1.5 MOA with Winchester’s 140 gr. SMK load. I’ve had sporadic luck with it in other guns so I’m not knocking any stars off. Fed a steady diet of Hornady factory ammo, this rifle was an absolute hammer, turning in consistent sub MOA performance in all conditions.

Overall Rating * * * * *
A sensibly priced tack driver from a company that builds some of the world’s best barrels.