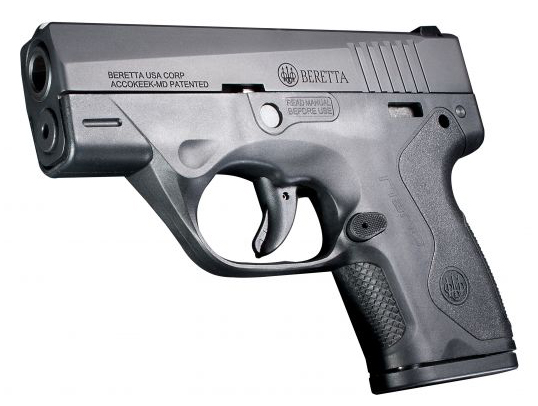 My first impression of the Beretta BU9 Nano: awwww, it’s a baby Glock! Even the artful swage line running from the rear to the front of the Nano’s slide can’t hide the fact that the baby Beretta is an Austrian-style chunky monkey. At second glance, the Nano is a soap bar that’s been left in the shower for a couple of weeks. It’s small, slim, sleek and sexy; a snag-free concealable shooter with low-profile sights and beveled edges.

There’s no slide stop to be seen; the reversible magazine release button is the pistol’s only protrusion. You could even say this striker-fired Nano looks like a GLOCK to be named later. Not that that’s a bad thing.

Like any little single stacker, the Beretta Nano challenges its owners to concentrate (even more carefully) on shot placement. The Nano packs a scant 6+1 rounds of your favorite flavor of nine mil. Fortunately, Beretta includes a spare magazine in the deal, encouraging Nano packers to double-up on ammo for any worst case scenario. Combat reload? Good luck with that.

Along with the Kahr CM9, the BU9 is +P rated. You can use hotter ammo, but you better hold on tight. The Nano is strictly a two-finger salute to Mr. Bad guy. The gun leaves smaller-handed women (like yours truly) struggling for pinky purchase. Depending on the size of your mitts, the Nano’s report may be best appreciated as the sound of one hand defending. Interestingly, Beretta laser-etched the gun’s serial number on the gun’s chassis instead of the grip frame. The Nano’s grip can be completely replaced. Shooters with [larger] paws for thought may want to wait until Beretta or an aftermarket supplier releases a customized frame capable of accommodating XXL hand sizes. An extended magazine is only a matter of time; the less the better. The Nano 9mm may be small and smooth, but it’s not the lightest gun of its type. The polymer-and-steel framed mini-nine tips the scales at just under 18 oz. That’s almost an ounce heavier than a similarly robust (if more elegant) Kimber Solo Carry and the (plenty cheaper) Ruger LC9. As always, there’s a trade-off between concealed carry comfort and muzzle rise/shooting accuracy. If center of mass follow-up shots at five yards-plus are a high priority — and why wouldn’t they be — the Nano is the right answer.

The Nano’s sights are unremarkable three dotters. For me, target re-acquisition is slower than it would be with a dot and post arrangement (like the set-up on Beretta’s beefier M9). Beretta claims that all you need is a small (1.3mm) hex wrench to pop in new sights on your own. Any Nano packer should give serious consideration to swapping out the stock three dot sights for some proper night sights. Down at the range, I fired 800 rounds of 115gr ammo through the Nano—a diet that would give the Kimber Solo a bad case of reflux disease. Here’s the skinny on the ammo I fed the gun:

I experienced one failure to eject (FTE) with Winchester white box and one failure to feed (FTF) shooting Remington UMC. In other words, the pocket rocket shot like a GLOCK—more or less. That said, I’ve read complaints by owners who’ve experienced regular FTE errors.

In the SHOT show video above, Ben Cook from Beretta USA admits the Nano might have an issue with underpowered ammo. In the video below Cook tortured tested the Nano, withholding lubrication and cleaning during thousands of rounds.

While I wouldn’t recommend putting your own handguns through this kind of abuse, I couldn’t help but to try the test for myself. As soon as my test Nano arrived, I gave it a bath in Hoppe’s No. 9, reassembled it and began shooting. During the entirety of the aforementioned 800 rounds and since I’ve yet to give the Nano even a sip of oil. Two errors speaks well of this petite pistol’s reliability.

The Nano’s trigger is the biggest fly in the ballistic ointment. The baby Beretta may emulate a GLOCK with its inline trigger safety, but it has none of the pleasure of a GLOCK’s go-pedal. The Nano’s heavy nine-pound bang switch has a long drag, and the journey’s not a smooth one. When it’s crunch time, you don’t want it to be crunch time. The shooter’s solution: one long consistent pull with an equally epic return.

Field stripping the BU9 is user-friendly enough; standard for this style of handgun. If you’re concerned about pulling the trigger to deactivate the striker, you can press the Nano’s striker deactivator with a pen tip. After that, give the disassembly pin a quarter turn (I used a penny, but you can use the edge of a magazine or a casing) and the slide separates from the frame. The whole process doesn’t take more than ten seconds, assuming you have a pen handy.

Initially, I was underwhelmed by the idea of yet another polymer CCW baby nine. The Beretta Nano won me over. The trigger is long on safety and short on precision but the Nano does all the things I expect from a self-defense subcompact. It’s light (enough) without sacrificing accuracy. It conceals well. It’s enjoyable to shoot, and a lot more affordable than the Kimber.

The Nano’s design isn’t groundbreaking, but it borrows the right bits from other pocket pistols and does it with GLOCK-like style. In fact, the Nano’s only real competition is the GLOCK micro-nine that the Austrian gunmaker has yet to build. Until then, the Beretta Nano is an ideal choice in an increasingly crowded niche.

Style * * * *
It’s curvier than a GLOCK, has clean lines, and roll-marked lettering. It’s sexy in a “tactical practical” kinda way.

Ergonomics (firing) * * *
“Comfortable heft” makes it a pleasant shooter. It loses a star for the two finger grip, and another for that long, crunchy trigger pull.

Reliability * * * *
My experience was primo, but there are complaints buzzing around about FTEs.

Customize This * * * * *
The non-serialized grip frame opens the door wide for customized grips. The easily interchangeable sights make the Nano a personalized package just waiting to be assembled.

Overall Rating * * * *
A pocket rocket that I can depend on without breaking the budget scores points with me, but its looks don’t hurt either. With a proper, more GLOCK-like trigger, the Nano would’ve landed the coveted TTAG fifth star.