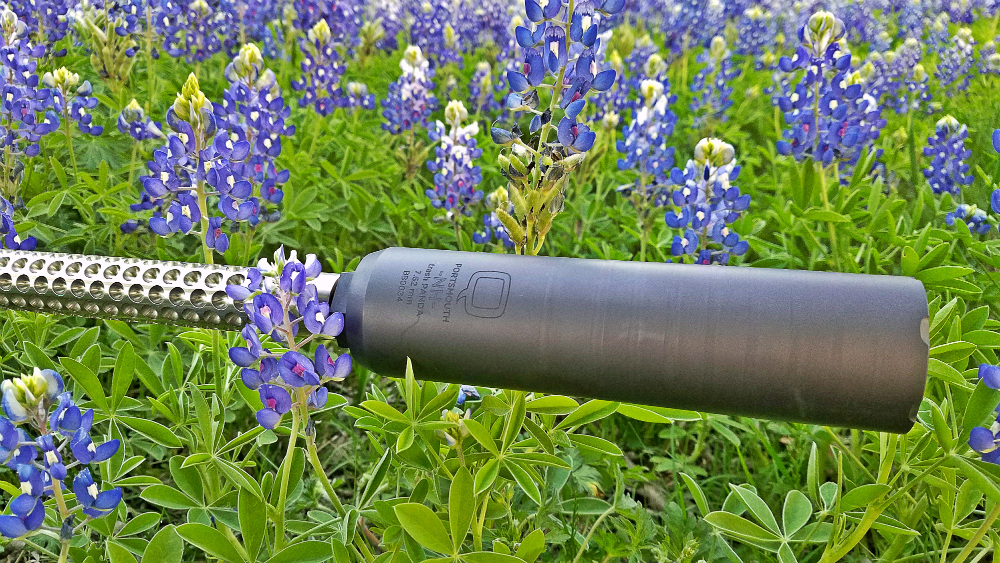 After reviewing Q’s Full Nelson and Half Nelson last August, I was sold on the smaller of their .30 cal suppressors. It would be my next NFA item. But, would it be their direct-thread Half Nelson or the QD Trash Panda? After shooting these two cans (Q cans, two Q cans, toucans?), the decision is made . . . With Central Texas’ famous Blue Bonnets in full bloom, I headed to the range with my Precision Firearms 6.5 Grendel (the model for most of the photos seen here), a home-built 300 Blackout SBR, and a 16″ .308 bolt gun.

The .30 caliber silencer that I already own is the Dead Air Sandman Ti. I specifically chose a direct-thread can because I enjoy shooting suppressed — given the ability to do so, I’ll favor it every time over unsuppressed — but didn’t want to worry about installing a muzzle brake on every review rifle that came through, or properly installing and correctly timing a brake on every rifle I already owned.

Plus, direct-thread suppressors have traditionally had a much better reputation for maintaining or improving a rifle’s accuracy and exhibiting little-to-no point of impact shift after removing and re-installing the suppressor. This was not the case — especially the POI shift part — with QD suppressors. I was unwilling to sacrifice accuracy or re-zero a rifle every time the suppressor came off and went back on. So Sandman Ti I went. Fast forward only a few years later and QD suppressor mounting systems have improved dramatically. The focus has shifted from rough and dirty, ratchet- or click-on speed to cutting install time way down while maintaining the repeatable precision of a direct-thread. And it’s that exact repeatability and firm, precise lockup that provides for a consistent point of impact. In the case of Q’s Trash Panda (a nickname for raccoon) and Thunder Chicken (a nickname for turkey, this is the full-size QD option), the Cherry Bomb Compensator uses traditional threads — it takes five revolutions of the suppressor from off to tight — behind a taper mount. Instead of a square shoulder, the taper increases surface area and better aligns the suppressor. Far less torque is required to enable a complete seal and a suppressor that absolutely will not walk loose.

As seen in the photo above, that taper really does seal up completely. This Cherry Bomb was brand new when I installed it, and while carbon deposits from my first range session are obvious in front of the taper they’re entirely non-existent behind it. The metal is as clean as can be. Some companies put the taper behind the threads, but putting it in front is a much better design. Squeaky clean. Each of Q’s QD cans comes with two Cherry Bombs, one threaded 5/8×24 and one 1/2×28. Either is installed on or removed from your rifle of choice via that gear-shaped pattern in the muzzle. Insert 1/2″ socket, then righty-tighty or left-loosey. I found this handy dandy.

Just make absolutely certain that your Cherry Bomb is attached to your rifle more securely than it’s attached to your suppressor. Thanks to the taper mount, the can only needs to be gently hand tight. Don’t go all ‘roid rage on it! If you unscrew your Trash Panda and the Cherry Bomb comes off with it…oy. There’s almost no Cherry Bomb exposed when it’s installed in the suppressor, so good luck removing it. Likewise, the nifty muzzle design on many of Q’s suppressors not only looks cool, it’s designed to accept a socket wrench or box wrench. A 3/4″, 12-point socket does the trick here. Though, if you properly torque your Trash Panda by hand, you should never need to touch the muzzle with a wrench. Unless, of course, you’ve decided to run a long handguard way down over the suppressor, as in the photo above. This sort of thing makes the socket-on-the-muzzle access pretty awesome. Side-by-side, it’s extremely hard to tell the difference between these two Q cans unless you’ve got ’em off the gun and can look in the barrel end. The direct-thread Half Nelson has a much smaller opening, designed to thread onto a 5/8×24-threaded barrel, whereas the Trash Panda has to swallow the whole Cherry Bomb. If you manage to look closely enough, you’ll notice via the robotic welds that there are 10 baffles in the Half Nelson but only nine in the Trash Panda. This is both to provide room for the Cherry Bomb Compensator and also because the compensator itself acts as the first baffle — the blast baffle.

As a suppressor’s blast baffle suffers the brunt of wear and tear — being blasted by debris and super-heated, high-pressure gas — there’s a strong case to be made for that baffle being replaceable. As in, build it into the muzzle device.

Whether you’re shooting powerful calibers or high volumes of fire or both, that first baffle will eventually wear down. It’s nice when a $75 MSRP part returns it to brand new rather than…well…there ain’t much you can do if it’s the actual first baffle welded into your suppressor. Installed on the rifle and read-to-shoot, as mentioned, the Trash Panda swallows most of the Cherry Bomb. It doesn’t look all that different from the firmly-against-the-shoulder Half Nelson. And it doesn’t add very much at all to the installed overall length. Nope, I can’t tell the difference either.

So, at this point I have developed a strong preference for the QD Trash Panda. I like the fast on/off, I like the doesn’t-have-to-be-timed Cherry Bomb muzzle device, and I like that said Cherry Bomb becomes the sacrificial blast baffle. But how about that point of impact shift? Considering the swirling, unpredictable wind in the quarry where I was shooting, it was a mistake to shoot the above target at 200 yards. However, I wanted to emphasize any POI shift so it would be clearly visible. And I don’t see any.

Six rounds shy of two boxes of Hornady BLACK 123 grain from Freedom Munitions (use code TTAG for 5% off everything on the Freedom Munitions website) went downrange, hitting steel targets at 200 and 258 yards. I then shifted over to my target and sent three rounds at the top left bullseye, removed the Trash Panda with a Silencer Shop “Suppressor Removal Tool,” waved it around, reinstalled it, and shot my final three rounds at the top right bullseye.

Obviously the groups aren’t identical, but I’m calling this POI shift-free. If I’m hunting a hog at 200 yards — heck, a squirrel…or a trash panda…or a frog — I’m making precise hits before and after suppressor removals and installs.

If you want to be really, obsessively precise, the Trash Panda’s muzzle design would allow the use of a torque wrench to install your suppressor identically every. single. time. In this contest, there is no contest. My next suppressor will be a Q Trash Panda. Overall * * * * *
Like I said in the Half Nelson review, I’d prefer if the barrel side of the Trash Panda were simply a flush base with no protruding, hex-shaped deal. It just isn’t necessary with the wrench-capable muzzle design and I think it would look better. That said, this is the only thing I can think of to nitpick on the Trash Panda. As my favorite .30 cal can available right now — beautifully balancing weight, size, sound suppression, and that fantastic “Quickie™” QD system — the Trash Panda earns a well-deserved five stars.