It has been nearly six months since I received a care package in the mail from the fine folks at KG Coatings that contained a mixed bag of lubricants and solvents. Now that I’ve depleted my healthy stock of chemicals, it’s time to finally render judgement. All ratings below are subjective and based on a 5-star scale. 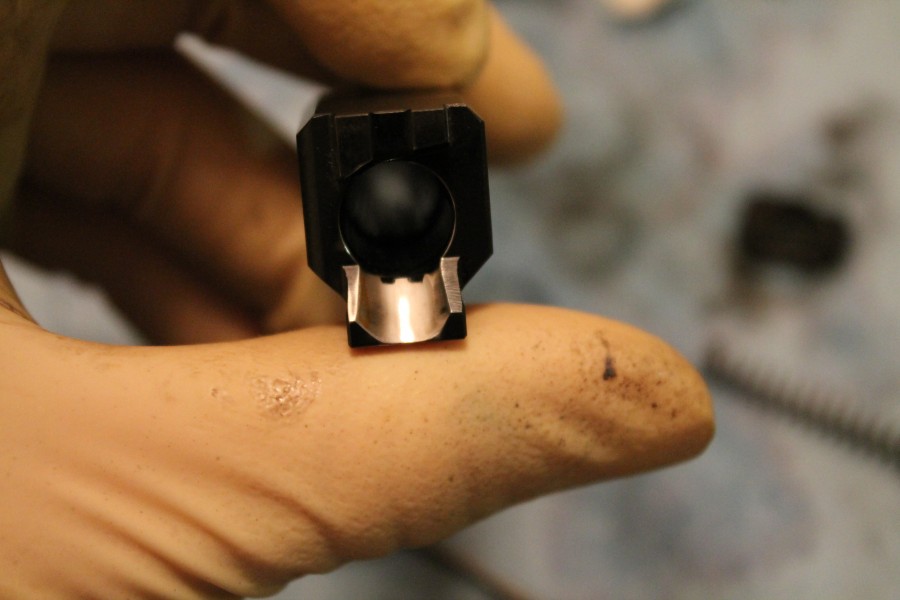 The Claim: KG-1 was the first product introduced to the shooting sports industry to specifically meet the need to remove carbon buildup and is the first step in the cleaning process. KG-1 is formulated to be environmentally friendly and contains no ammonia. Recommended for use by several barrel makers. KG-1 is pH neutral and is ideal for removing carbon from black powder rifles, centerfire, rimfire, automatic and gas assisted weapons.

My testing protocol for KG-1 was to shoot something until it got really dirty and then see how little work I had to do to get it clean. Initially, I started with my Ruger 10/22 which was already dirty. Shooting 500 rounds of WalMart’s finest only made that worse. A few dabs of KG-1, a mild nylon brush scrub, and a rinse with KG-3 and things were like new. Naturally, this only piqued my curiosity. So I sought out the dirtiest pistol I could find. Above, you’ll see before and after pictures of a barrel from a 9 mm XD(m) that has seen 2000+ rounds without cleaning. Moving the barrel from dirty to clean took less than 10 minutes. As a final test, I yanked the gas tube out of my AR to find some baked on gunpowder. I coated the tube in KG-1, let it sit for 5 minutes, and wiped it with a clean cloth to find a shiny new gas tube.

KG-1 is probably the most effective carbon killer I’ve ever seen. It doesn’t smell, it doesn’t stain, and it has a bit of oil to it that helps it stick. My new cleaning routine is to hang the gun muzzle down, soak the barrel with KG-1 for 10 minutes, and then brush, flush, and push clean patches through. My guns have never been cleaner.

The Claim: KG-2 was originally developed to maintain the bore integrity of sniper rifles. Unlike most other mechanical products, KG-2 contains no ammonia and is a 1200-1400grit soft compound to remove copper and lead, while leaving the integrity of the bore. In most cases KG-2 will perform exceptionally well in removing copper and lead with quality patches, however, in some cases, nylon brushes are recommended. Based on the theory of removing the copper and lead from the lands and groves only, while simply smoothing over the impregnated copper and lead in the micro-fractures of the bore, KG-2 will help reduce the need for fouling shots and it is recommended and used by SWAT and sniper teams. KG-2 is an ideal product for fire polishing (A technique producing a finer finish than Fire Lapping).

While KG-1’s effect is immediately apparent, KG-2’s claim to fame is a bit harder to test. I don’t do enough long range shooting to really see an effect from fouling shots (and honestly none of my guns seem to need them). What it has done is make cleaning up easier. I used to push patch after patch after patch to clean up a barrel and now I can get to a clean barrel in less than 5 patches.

The guys at Gunwerks use it as part of their cleaning regimen and they regularly shoot things past half a mile. Since I never saw those guys doing anything unnecessary, I’m willing to say it probably works as intended. Beyond that, I can only say that it seems to be keeping my bore from fouling as hard.

The Claim: KG-3 is a non-chlorinated ozone safe formula used to remove the residue loosened by KG-1, KG-2, KG-12 and for cleaning and degreasing parts. KG-3 contains a special formulation of fast drying, water-displacing solvents which will rapidly cut through oil and grease without leaving a residue.

I’ll fess up to say that I normally buy case after case of brake cleaner from the neighborhood automotive parts house. And for anything metal, that works fine. However, my plastic guns have not fared well with this treatment. They get ugly discoloration spots that are nearly impossible to remove. As such, I’ve had to resort to using an oil based solvent like Hoppes #9 which I can never quite remove. So my options were always a.) slightly oily gun or b.) discolored plastic gun. KG-3 has settled that debate as it does a jam up job of flushing debris, making a perfectly clean surface, AND it doesn’t discolor plastic. The Claim: KG-12 was developed specifically to clean the copper fouling from large bore military weapons. KG-12 provides professional shooters, gunsmiths, armorers, hunters and other firearm enthusiasts with a product that will remove the toughest copper fouling without damaging the bore. Unlike ammonia-based products, there is no need to neutralize KG-12 or to remove it quickly because KG-12 contains no ammonia.

By far, the most exciting of the chemicals I tested, KG-12 is magical at removing copper. I know this from 3 experiments, two of them planned.

2.) I filled the barrel of the aforementioned XD(m) with KG-12 after completely cleaning it using KG-1 & KG-3. I soaked it for 30 seconds and drained the liquid through two cotton patches (see above). That nasty circle is copper residue that was removed from the barrel.

3.) The most unintentional, strangely hilarious, and illuminating was a complete accident. After a thorough cleaning session, I threw an uncapped bottle of KG-12 into my cleaning supplies box.  with a brass cleaning rod I recently purchased, a steel core cleaning brush, a brass brush, and a variety of steel bits. Two days later, I opened the box to find a half empty bottle of KG-12, some soaked steel bits, and a mangled mass of brass pieces. Chemistry grads will remember that brass is an alloy of zinc and copper. And KG-12 eats through copper like crazy.

After those three tests, I’m confident that there isn’t a copper fouled barrel in existence that can’t be restored with KG-12.

My overall feeling is positive on the KG cleaners. That Bore Polish is dark magic but people who know more than I do swear by it. Everything else on the list was totally awesome and I will enthusiastically endorse it.