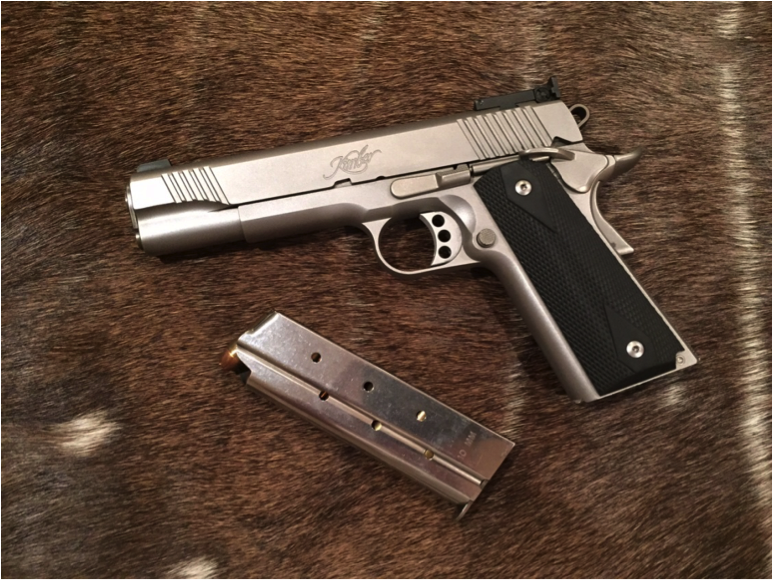 I’ve always been a 1911 fan. Perhaps it comes from my childhood memories of flipping through my great grandfather’s World War I scrapbook and idolizing his service in the War to End All Wars. My favorite picture is of him and his childhood sweetheart who he married just prior to shipping off to France. While Jeff Cooper would not have approved of his trigger finger placement, it’s an image that left an indelible imprint on my impressionable young mind. I’m also a fan of 1911s chambered in something other than .45 ACP . . .

Sure, that may make me a heretic, but a 1911 doesn’t have to be a .45. That’s why the Kimber Stainless Target II in 10mm was my first 1911, a gift from my grandfather several years ago. The Stainless Target model carries a $1,108 MSRP, but can often be found in the mid $900s range if you look hard enough.

Although relatively unnoticeable, the 10mm model’s grip is slightly thinner than a traditional .45ACP 1911. The gun’s stock grips are black diamond checkered synthetic and do an excellent job of helping the shooter control the bite of the 10mm recoil. The rear strap comes checkered from the factory; however, the front strap is smooth stainless steel which is my only real gripe with the gun’s standard options. The smoothness makes gripping the gun with sweaty hands or during a long range session without gloves a bit of a challenge, but it is not something so material as to seriously affect performance.

Another area where some shooters might consider upgrading an already nearly perfect gun is the safety. While it functions flawlessly for right handed shooters it is not ambidextrous and the addition of an ambidextrous safety would be a nice, albeit probably unnecessary, upgrade for most shooters.

The stainless steel slide and frame make maintenance incredibly easy. Breakdown requires a traditional 1911 breakdown tool and cleaning the gun is like any other 1911. Mine seems to like Rem Oil and I’ve never had a malfunction no matter how dirty I get the gun. Sure, breaking it down isn’t as easy a Glock or other polymer pistol, but once you get the hang of it; it’s a very straightforward process.

This particular model features a 5” steel match grade barrel along with adjustable target sights. The rear sight is etched to reduce glare though I plan to upgrade to night sights at some point in the near future. Although the gun could easily be open carried or in a shoulder holster, it’s designed more as a target or trail gun which makes the lack of standard night sights less of a requirement. Use as a target or trail gun also negates some of the issues associated with the weight of a full size 1911. This one weighs in at a healthy 38 ounces empty, but the weight is so well distributed that the gun feels much lighter when shooting it. The gun came with only a single 9-round magazine and I purchased two additional factory Kimber mags. The groove along the length of the magazines makes it easy to distinguish them from traditional .45ACP 1911 magazines which is particularly helpful when you’re at the range with multiple 1911s in different calibers.

Ammunition is widely available from all the major manufacturers as well as multiple custom shops. While not as widely available as 9mm or .45ACP, I’ve never had a problem finding it. Prices can range from a hefty $38/box of 50 for American Eagle at my local range to <$20/box for reloads. Given my work schedule, I’ve found the best solution to cheap ammo for range time has been to find someone local who will reload my spent cases.

Enough with aesthetics and accoutrements, though, the real question is – how does it shoot? Short answer – like no other handgun I’ve ever had the pleasure of firing. The gun delivers incredible performance and punches well above its price point. I’ve put a couple thousand rounds through it with nary a malfunction.

The gun is a delight to shoot from its crisp 4 lb. trigger to the deadly accurate sights to the ease of grip. The 5” barrel not only enhances the accuracy of the gun, but the increased weight tames the recoil of the 10mm to a very manageable amount. I would argue my Kimber Solo transfers more recoil to the shooter than this gun. I often take new or novice shooters to the range and never hesitate to hand them this gun after a few magazines of .22LR and 9mm. Many don’t even notice the change in caliber and most list it as the easiest to shoot. This is usually backed up by the results on their target 7 – 10 yards down range. The gun easily outshoots my limited skills and delivers incredible groupings out to 25 yards (the farthest I’ve shot with it).

In summary, this is an amazing value proposition for someone who wants either a non-traditional 1911 or a trail gun for hunting or hiking in bear country. Not only is it a joy to shred paper with this gun, but it also instills the necessary confidence in the owner to trek afield with no worries about whether he or she will be able to hit a dangerous animal because of recoil or lack of accuracy. If I could have only one handgun, then this would be it.

Ergonomics: * * * * 1/2
The addition of checkering to the front strap would have made this a five star rating.

Reliability: * * * * *
I’ve run everything from reloads to cheap factory ammo to custom defense ammo without a single malfunction. I’d trust my life to this gun and I wouldn’t say that about every 1911 I’ve owned.

Customization: * * * *
The lack of a rail might lower the customizability factor in some shooters’ minds, but this gun comes with nearly everything you’d need and/or want.

Overall: * * * * *
This gun rocks. It’s not only extremely accurate on the range, but it also makes for a fantastic trail gun in bear country. I’ll say it again, if I could have only one handgun, then this would be it.