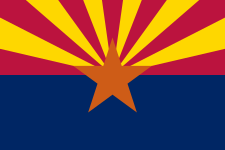 HB 2339 would have ensured that local governments that wished to prevent people from carrying weapons in public buildings would have to do more than hope everyone obeys signs directing them to disarm. If those with a permit were not allowed into the public buildings, then security measures would have been required to ensure that those who did not obey the law were disarmed as well.

Representative Brenda Barton of Payson was disappointed by the veto. A similar bill had been vetoed last year, and she said that she had crafted the bill to address the Governor’s issues with it.  From therepublic.com:

House Bill 2339 would have allowed people with concealed-carry permits to bring weapons into government buildings unless security measures — including armed guards, metal detectors and gun lockers — are in place. The measure excluded public K-12 schools, community colleges and universities.

Kansas passed a similar bill last year. Opponents of the bill have claimed that it will require them to spend large amounts of money to implement; proponents have noted that it does not take much money to remove a sign.

Governor Brewer has served two terms and is not expected to run for reelection.