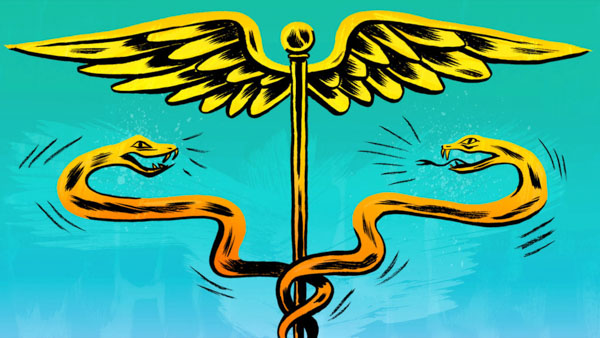 Who could possibly imagine a bunch of tightly specialized professionals being taken seriously when “speaking out” on a subject about which they have little or no knowledge? Yet that’s exactly what Salon writer Amanda Marcotte does in her piece titled “An apolitical profession wakes up: Trauma surgeons speak out about gun violence.”

First off, the AMA is anything but “apolitical,” especially least when it comes to Second Amendment rights. According to this June 2016 piece from NPR:

The AMA, the largest physicians group in the U.S., says it has supported gun control since the 1980s, and as recently as 2013, the association called the uncontrolled ownership and use of firearms “a serious threat to public health.”

But if we live somewhere in the dark recesses of Ms. Marcotte’s fantasy world, we find that:

…rarely does the public hear from the very people who deal directly with the fallout from gun violence on a daily basis: trauma surgeons.

I guess she was living under a rock during the early 1990s when Dr. Arthur Kellermann published his (now thoroughly discredited) study in the New England Journal of Medicine. Maybe she wasn’t paying attention in the late 1990s and early twenty-naughts when Drs. Philip Cook and Jens Ludwig were spouting their gun control nonsense.

And perhaps Amanda was off somewhere on a vision quest when Dr. Garen Wintemute was violating privacy laws secretly taping transactions at gun shows, then editing the tapes to make it appear that dealers were ignoring the law. And Dr. David Hemenway was having heart palpitations over the idea of people exercising their natural, fundamental, and inalienable human, individual, civil and Constitutional right to own and carry the weapon of their choice.

She also must have been otherwise occupied when Dr. Randi Smith testified before the San Francisco Board of Supervisors in September of 2011, and before the California State Assembly in May of 2013, and Dr. C. William Schwab was an invited speaker at a March 2013 symposium on Gun Violence in America: A Public Health and Social Crisis with (among others) the director of Ceasefire PA.

Also on Dr. Schwab’s resume — and thoroughly ignored by Marcotte — was his co-author credit for Reducing firearm violence: a research agenda, published in Injury Prevention magazine in April of 2007. He was also one of the founders of Firearms Injury Center at Penn (which received a $1.2 million grant from the Joyce Foundation in June of 2001), and as far back as 1993 gave a presentation at the American Surgical Association meeting on “Violence: America’s Uncivil War.”

So apolitical? Hardly. More from Marcotte:

Last week the American Surgical Association held its annual meeting in Philadelphia, and Dr. Shelby Resnick, a trauma surgeon in that city, presented a paper she co-wrote with a group of other Pennsylvania trauma surgeons and researchers about the correlations between firearm injury and laws restricting access to guns.

Drs. Schwab and Smith were two of those co-authors, and yet, despite their presence, and despite the questionable methodology (back to that in a moment), they were unable to make any sort of link between strict gun control and reduced firearm homicide rates. But through the art of selective quotation, Marcotte manages to imply just the opposite:

Anyone who bothers to follow the link to the paper’s abstract (the actual paper is not yet available) will find that the results don’t match Marcotte’s apparent agenda:

Good thing for the antis that if the science won’t back them up, reporters with an axe to grind always will.

About that scientific method thingy; in order to determine which states have strict gun laws and which don’t, Dr. Resnick and her fellows used the Brady Campaign State Scorecards (BCSS) as a measuring stick.

Now I personally would have thought that to qualify as “restrictive” a state should have to get an ‘A’ or perhaps an ‘A’ or a ‘B’. The only problem with doing that, though, is that before the Bradies falsified um, “curved” their results, not a single state received an A and only 9 states got a ‘B’.

In fact, pre-curving, there were no A-grades, 9 B-grades, 2 C-grades, and 2 D-grades, leaving 37 states that received an ‘F’. Even after “fixing” the numbers there were still only 5 A-graded states which would make the sample too small to be meaningful. Only by expanding the definition of “restrictive” to include grades of D- and above were Dr. Resnick and her group able to get an almost even split.

Another problem with using the Brady grades: their grade distribution. Any score above 18 is passing.

Huh? I have attended many different educational institutions with many different scoring structures. The least restrictive was the U.S. Navy’s Nuclear Power School, where the mantra was “Two-five to survive.”

This did not, however, mean 25 out of 100. It meant 2.5 out of 4.0 which translates to 62.5% for a passing grade. I shudder to think of what kind of problems nuclear subs would have had with “Zero-point-seven-two gets you through.”

Dr. Resnick’s researchers did a little better with their fatality numbers, they used the CDC’s WISQARS database.

Not having scads of underpaid interns to assemble my data, I did not (as the Resnick team did) go back and compare Brady and CDC numbers for 1999-2003, 2004-2008 and 2009-2013; instead I pulled the 2015 Brady scores (which are downloadable) and compared them to the WISQARS numbers (also downloadable) for 2009 – 2013. Unsurprisingly, my results were similar to Dr. Resnick’s, but I went a little further than she did.

The ‘association’ of strong gun laws with reduced suicide rates is quite simple to deconstruct. The antis often make much of how “restrictive” gun laws reduce the number of suicides committed with guns. Indeed, Canada is one of their favorite examples. A well-known and oft-quoted study by Drs. Antoon Leenaars and David Lester states:

Analysis showed a significant decrease after passage of Bill C-17 in the rates of suicides… involving firearms and the percentage of suicides using firearms.

This sounds pretty unequivocal, but it is, in fact, both incomplete and completely misleading. As Dr. F. Bridges pointed out in his article “Gun Control Law (Bill C-17), Suicide and Homicide In Canada” while the suicide rate using firearms definitely dropped, overall suicide rates showed no statistically significant change.

Furthermore, when we look at the numbers graphically it’s very easy to see. Below is a chart comparing overall suicide rates with Brady scores (suicide rate has been multiplied by five for clarity and the Brady score has been normalized to start the scores at 1:

Pretty easy to see that there is no correlation, much less any sort of causation between gun control laws and suicide rates, no?

Ms. Marcotte went on (and on) with her diatribe, but it’s more of the same; distortions, fabrications, and selective quotes trying to convince people that guns are bad and gun laws are good. I read it so you don’t have to.