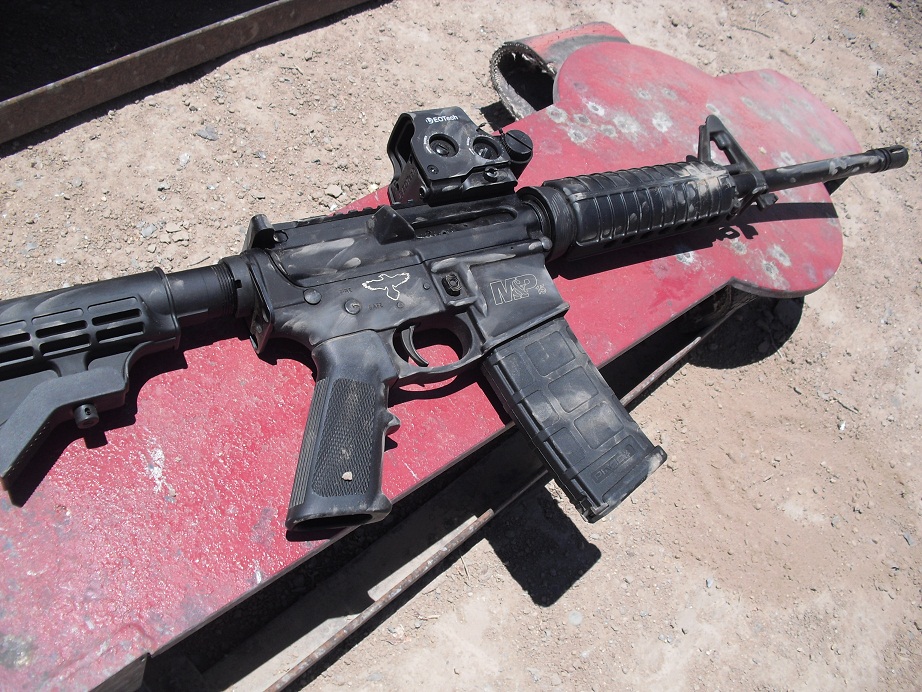 There’s innovation, and then there’s beating a dead horse. A few guns have fallen into this latter category, like John Moses Browning’s 1911 design. At over 100 years old, the 1911 has been done, redone, re-redone, and retro-redone with anniversary editions released that hearken straight back to the original weapon . . .

. I say that lovingly as an admitted “1911 guy.” More recently, the  “Modern Sporting Rifle” has begun to fit the same bill. When it comes to accessories, my Prada and Gucci-loving cube-dwelling co-worker has less choices than your average AR owner.

Some observers have gone so far as to call the AR “Barbie for men.” I couldn’t possibly comment. But I can tell you this: Smith & Wesson have introduced another AR variant called the M&P15 Sport . . .

The Smith & Wesson M&P15 Sport rifle is not your mall-ninja AR dripping with rails and oozing tacti-cool. It’s not meant to be. Smith’s aimed its rifle at AR newbies looking for a quality firearm at a bargain price.. Unboxing the M&P15 Sport isn’t much of an event. You open the cardboard box and strip back a layer of foam. Laying in front of you: a black rifle and Magpul 30 round magazine. Taking a closer look, you can see that Smith & Wesson shaved costs where they could. But they didn’t skimp on the important stuff.

Smith & Wesson have done away with the dust cover and forward assist. Smith Marketing Maven Paul Pluff  told TTAG that sacrificing the dust cover in the name of cost-savings was a no-brainer. The target market is less likely to need an AR to fight terrorists in sandstorms and extreme weather than use that funny shell holder thingie to eat snails [paraphrasing]. The M&P15 Sport will likely live out its days in a case or safe, with semi-regular forays to the range or the woods.

To check out the rifle’s reliability, I ran the rifle for a week out at Gunsite Academy in Paulden, Arizona.

I spent the week putting rounds down range in arid, sandy, dusty conditions – begging the Smith & Wesson M&P15 Sport to show me that it needed a dust cover. I fired standing, kneeling, and from several variations of the prone position, including rollover-prone where the bolt of the rifle was less than two inches from the dust, rock, dirt, and grime the ejection process was kicking back up into the rifles action.

Did nastiness get in to the action? Ohh yeah it did. I made sure of that by peppering the rifle with a few small handfuls of Arizona high desert when the Smith and Wesson folks weren’t watching. By the end of the week I had one gritty feeling charging handle, one rough trigger, and one dirty as all-heck action. I was also holding a rifle that continued to function without a single hiccup. The forward assist (err . . . forward “scallop”) on the M&P15 Sport is a throwback to the rifle’s original design. The cylindrical slap-assist found on most other black rifles is no-where to be seen on the M&P15 Sport.

For a beginning AR shooter, the manual assist has the same likelihood of turning a minor and easily correctable malfunction – such as a double-feed – into one that could require gunsmithy assistance. Newer users tend to follow the Hollywood example of hitting the forward assist with the force of Thor’s hammer rather than giving it the gentle smack that’s needed to bring a round into battery if it hasn’t seated properly.

So what’s an M&P15 Sport owner to do if their rifle doesn’t charge properly without a forward assist? Simple – use the scalloped section of the bolt itself and a finger on the support hand to gently nudge the action closed (demonstrated in the above video). This isn’t a new idea; it’s an homage to pre-forward assist designs. Even with dirty rifle with a gritty action, I could easily seat rounds after a manually-induced malfunction. The M&P15 Sport’s barrel isn’t an M4 cut; if you’re looking to mount your M203, look elsewhere. The Smith sports a full-profile barrel of American 4140 Steel. The bolt carrier and gas key are chromed, and the barrel sports their Melonite coating. Smith claims that the bare bones approach has no effect on durability. They’ve fed two M&P15 Sport test rifles a combined ~170,000 rounds of various brands of ammunition without any [visible] damage to the Melonite finishing process.

The M&P15 Sport’s barrel also incorporates 5R rifling, an innovation Smith added after they acquired Thompson Center Arms. The M&P15’s 5R rifling is a 1/8” “gain twist.” The twist starts longer and tightens to 1/8” towards the end of the barrel.

In theory, the bullet stabilizes before fully engaging the rifling. Shooting Remington’s Disintegrator 45gr frangible ammunition in shoot-house drills and testing on steel, the rifle didn’t have a single failure-to-feed or fire. Given that mag failures account to many of the issues shooters encounter with their AR, Smith & Wesson “got it right” by spending a few extra dollars on the factory-standard 30-round P-mag. Gunsite instructor Dave Starin (20 years LE, 12 years SWAT) also reported—and I can confirm—that accuracy wasn’t an issue, either.

The rifle ships with a flat-top Picatinny style rail with an adjustable / removable dual aperture rear, and adjustable A2 post front sights. Removing the factory options to mount the EOTech EXPS2 (review to follow) was a breeze. The muzzle brake is standard A2 style. The M&P15 Sport’s threading is also standard; shooters can swap out for common muzzle accessories should they desire.

The rifle’s lower and upper receivers are fashioned from 7075 T6 Aluminum, fully-forged in-house by Smith & Wesson. Included with the lower: the single piece, solid-forged, non-removable, over-sized (for gloves) trigger guard. A typical six-position telescoping stock is standard, along with sling mounts allowing for single or double-point sling attachment. A bayonet lug is under slung – just in case. All of the M&P15 Sport’s parts are interchangeable with the rest of their AR product line.

For those of you living in the People’s Republic of Kalifornia – fear not. Smith’s making a California-compliant version to satisfy your political overlords. For their Cali-compliant “bullet button,” Smith & Wesson’s mag-release can be engaged with a round of .223/5.56 ammunition. The M&P15 Sport is a perfect entry-level AR. With stock sights, the rifle is amazingly accurate. Equipped with an expensive optic like the EOTech EXPS2, gratuitous mag-dumping onto targets from 50 – 110 yards was child’s play. I engaged various targets on Gunsite’s Scrambler course while the OFWG’s decided who was going to shoot next. Point of Aim quickly became Point of Impact. I was eventually instructed to stop wasting ammo for the sake of the sweet-satisfying PING! of steel. Sad, I know.

Testing at Gunsite was less about ranged engagement or precision shooting and more about carbine drill and functionality. Maximum distance shot during the evaluation in Arizona: 50 yards (not including the Scrambler targets, which extend upwards of 100 yards). The gun’s back on the East Coast with me; I’ll be firing out to 100 yards from a rested position and beyond, and report back.

With night vision and thermal gear (hey, why not?), I was able to use the M&P15 Sport to hit pie-plate steel at 50 yards. More importantly, in head shot and non-standard failure drills extending from three and out to 25 yards, I consistently placed rounds in the T-zone within seconds of being instructed to fire.

The Smith & Wesson M&P15 Sport is all yours for $709 msrp. That’s  $600 – $650 in real world dollars. If the gun is as reliable as our initial impressions indicate, that’s tremendous value-for-money. It’s taken Smith a while to get here, but it looks like they’ve finally brought the same no-nonsense quality and functionality to the AR world that made their revolvers so justifiably famous.

Reliability: * * * * *
One feeding issue—traced to the cheap aluminum magazine I was using as a back-up. Not a single failure with the factory-issue Magpul. I shot well over 1000 rounds through the rifle without cleaning (with additional lubrication).

Overall Rating: * * * * *
The price is right, the product performs, and America’s second largest arms manufacturer stands behind it. What’s not to like?

Special thanks to Manassas Guns and Ammo Warehouse for handling the transfer to bring this rifle back to Virginia for further testing. Stay tuned for updates.