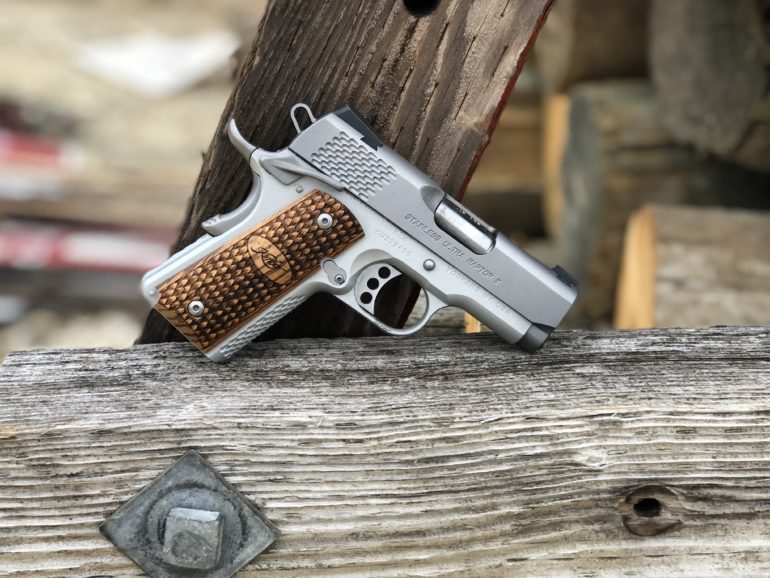 Kimber claims their new $38 million Alabama factory will create more than 350 jobs over the next five years. While the Kimber’s tax break remains unspecified, the deal depends on one thing: product. Whether deserved or not, the brand must overcome its rep for producing unreliable firearms to woo disaffected customers and win new ones. Does the  $1286 Kimber Custom Shop Stainless Ultra Raptor II in .45 ACP set the standard for the future? Kimber ships the Ultra Raptor II in a plastic box with the standard Democrat lock and one  — count it one — seven-round capacity magazine.

The company’s website claims the pistol got its name from “a combination of aggressive slide and frame serrations, feathered logo grips and special scaled texturing accents.”

The Zebrawood grips are beautifully finished and help make the compact .45 look balanced, stylish and lethal. The “texturing accents” running across the top of the slide continue the Ultra Raptor’s feathered theme. Raptor. Bird of prey. OK then . . . The slide is, as advertised, stainless steel. The satin silver finish is perfectly applied and tool marks are notable by their absence. The Ultra Raptor II’s cocking serrations match the indentations on the front of the grip. Again, they’re both cool-looking and effective. The controls are standard 1911: a left side mag release and slide stop, a positive-feeling right-sized ambi-safety (yes I know the thumb safety wasn’t part of JMB’s original design), and a grip safety.

Bonus points for the Ultra Raptor II’s tritium night sights; all carry guns should ship with low light capability. But while some may see the snag-reducing angled rear sight as a bonus for a carry gun, I’m not a fan of sights that you can’t easily rack on a shoe or belt. Especially when they’re called “tactical wedge.” Taking apart the Ultra Raptor is as easy as disassembling my GLOCK 19. Simply hold the slide partially back, push out the slide stop, take off the slide, remove the guide rod and spring, barrel bushing and push out the barrel.

Kimber says the Stainless Ultra Raptor II’s single-action trigger breaks between four and five pounds. Ours measured closer to four, and felt like a 1911 trigger should: short, crisp with minimal slack and a clean break. GLOCK fanboy that I am, I was expecting Kimber’s sub-compact 1911 to generate snappy recoil. A big boy caliber through a three-inch barrel is not a normal recipe for shooting pleasure or accuracy. To my surprise the Raptor II generated a stout but perfectly manageable recoil impulse.

Credit the Kimber Ultra Stainless Raptor II’s weight, of course. But the .45’s textured wood grips also had a hand in the gun’s controllability (so to speak). The “feathered” texture helped keep the gun securely planted in my mitt, while the wood absorbed sweat — a common problem here in Texas which can quickly interfere with shooting stability.

I ran the Ultra Raptor II through target transition drills, cadence, and rapid engagements from concealment at distances of up to 20 yards. Shooting a platform with which I have limited familiarity, I could mag dump at ten yards on C-zone sized steel with about .25 second splits with all rounds landing on target. Close in, slow fire, standing non-supported, stacking rounds is like connecting Legos. Out to 75 yards, I consistently hit the steel popper with Cap Ams and Winchester 230 grain FMJ ammo. Grouping stayed small, about one inch at 7 yards and 4 inches at 25 yards. Over the course of two weeks I put some 500 rounds through the pistol. The good news: the Ultra Raptor II delivered near perfect reliability. The bad news: it wasn’t perfect; I experienced three stove pipes shooting Cap Arms ammo.

The good news: that’s lightly loaded ammo that’s no longer in production. So a Mulligan. And the usual warning: feed your gun what it likes to eat.

Kimber’s profits depend on selling firearms at the bottom end of the top end of the market (or the top of the bottom end). In the rarified air of “mass luxury” there’s little margin for error. The Custom Shop Stainless Ultra Raptor II doesn’t make any mistakes and has the Kimber “look” that speaks of quality craftsmanship.

If Kimber’s new factory produces all its guns to this standard, their Southern expansion won’t fail. Neither will Ultra Raptor II buyers, should worst come to worst.

Accuracy * * * * *
Round stacked on top of each other at 7 yards, 4 inch grouping at 25 yards, and consistent hits on popper sized steel at 75 yards