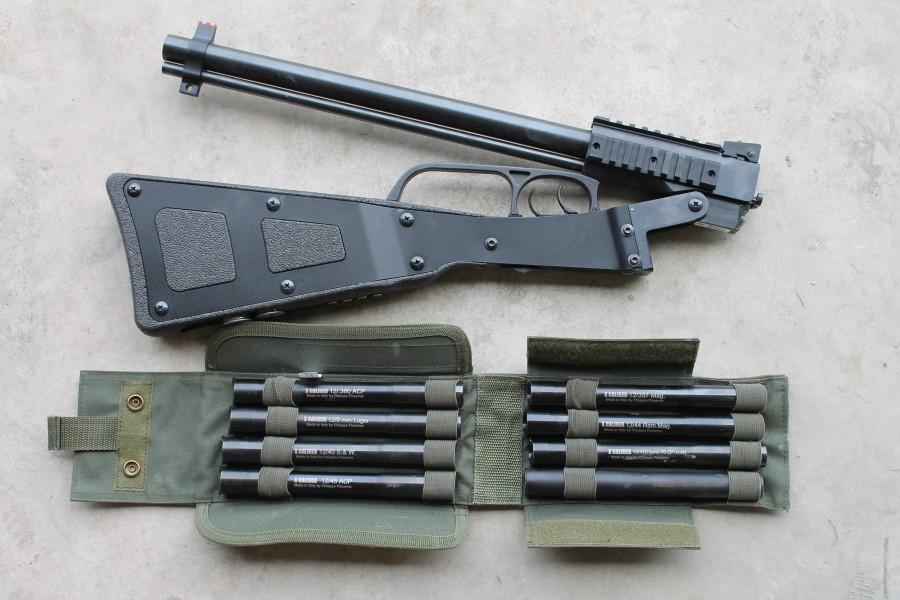 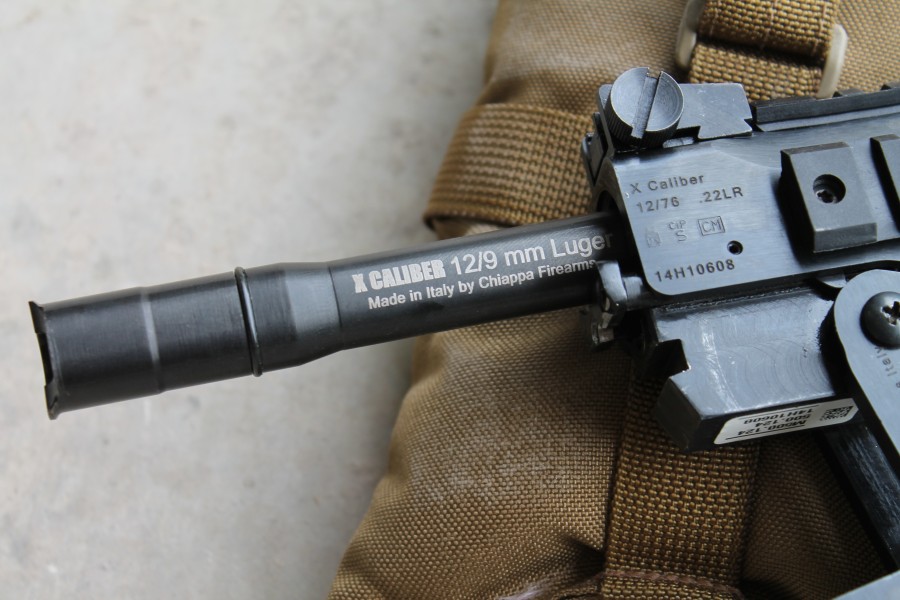 The X-Caliber is marketed as a survival rifle of sorts. The “gun” can shoot both .22LR and 12 gauge. With the addition of any of the eight barrel inserts that come with the gun, it can be made to shoot the following: The idea is very attractive. Theoretically, you could toss this gun in your truck or your pack, grab some hard cast .44 Mag for the big critters, a box of .22 for the small critters, a handful of 2-3/4″ 12 gauge for the flying critters, and the barrel inserts to shoot anything else you find along the way. About the time you really get lost in fantasy land, the harsh reality of the practical limitations of the X-Caliber will give you a cold, wet slap to the face. The first and most pressing wake up call: the .357 barrel flat out didn’t fit. I tried it with the gun cold. I tried it with it hot. No dice. In fact, the whole premise of large caliber barrel inserts scared me a bit. I didn’t try the .44 Mag barrel. Call me a wuss all you want in the comments, I don’t mind. Much. The second downer: how damn unwieldily the little bugger is. You’d figure that a gun that looks this light would be ya know, light. But it weighs nearly six pounds. And for that kind of weight, you could just keep a minimalist AR 15 with irons in two pieces in a bag. While interesting looking, the stock’s made of styrofoam and steel. It’s not comfortable to shoulder at all; the only place to grip with your support hand is right in front of the trigger guard. This makes the X-Caliber downright uncomfortable to shoot in most practical positions. Once you break the shot, you break the action open and then flip out the spent casing with your thumbnail. No assisted ejection here. Oh sure, that sort of thing would be impossibly expensive to engineer, but it sure would allow you to put a follow up shot downrange within a few seconds of the first one versus the nearly ten seconds it takes currently. And forget about quick barrel changes. The watertight tool kit included in the stock includes a very purpose-built pick that is the perfect size for prying out barrel inserts. Once you get the hang of it, you can change barrel in less than a minute with far fewer four letter words. I let several people shoot this gun. Every person nervously asked, “How bad is it shooting 12 gauge?” To put it bluntly, it’s blunt. The lack of cheek weld, the short length of pull, and the six pound weight combine to make the X-Caliber a pain to shoot. I put five rounds of 2-3/4″ steel shot down the pipe to confirm that it functioned and threw shot in the general direction of my aiming point.

I outsourced the rest of the functional testing to unwitting onlookers at the range. Twenty five yards seemed to be about the maximum range of patterning that would cover a squirrel or rabbit with a few pellets. Hungry hunters would be best served getting a little closer. The 20-gauge barrel is a bit more acceptable from a recoil perspective, the .410 even more so. Like the 12 gauge though, expect to stalk-up close to your prey if you’re interested in ethical kills. In a perfect world, the user would sight-in the gun in using the .22 barrel and the POI and POA would always be close to the .22 barrel’s. In the real world, not so much. With the .22 barrel hitting POI/POA at the 25 yard line, the rest of the pistol inserts hit somewhere within an eight inch radius of that aiming point. I use an IPSC torso steel target for a lot of my function testing with new guns. Using the POI/POA .22 sighting method described above, I could reliably hit a steel target at 25 yards with any of the barrel inserts. Great for human-sized animals, poor for small game. For the post apocalyptic scenario I’d originally described, this gun might be a contender as long as A Minute of Bad Guy at ~25 yards was your standard for accuracy. Much beyond that and you’ll need to sight the gun for each cartridge you load. If you live in a state where onerous regulations that makes getting multiple guns difficult, the X-Caliber would be a fine thing to have in the safe. You could shoot whatever ammo is cheapest and most plentiful at that moment. The one area where I feel comfortable giving the X-Caliber extraordinarily high marks: the trigger. Boy do I love to rip a gun company for shipping guns with bad triggers. I can’t fault Chiappa for these triggers. One is dedicated solely for the .22 barrel and it is on par with my Ruger American Rimfire Rifle. There’s no takeup, minimal creep and the break is clean at just over four pounds. The 12-gauge barrel is a bit worse with some mush and grit in the travel, but an equally clean break at something approaching five pounds. The other area of great surprise: the sights. The front is a very bright orange fiber optic with a rear aperture adjustable for windage and elevation. Windage is handled by the sturdy knob on the right side and windage is handled by sliding the aperture forward or backward on five marked detents. Its’s fairly easy to knock the elevation adjustment loose carrying the gun around, so keen operators will make checking that a part of their firing sequence. Other than that minor issue, these sights are incredibly crisp and easy to use, and much better than some factory irons I’ve tested in the past. Looking past the materials, namely stamped steel and styrofoam, the quality is utilitarian at best. There are obvious machining marks all over, and the gun has gained a fine patina of rust in the few months I’ve had it. The rust is easily removed with some elbow grease and largely inhibited with an oily rag, but it is by far the least elegant gun that’s ever taken up residence in my safe, and there was a Mosin Nagant in there for a while. Had all the barrel inserts fit, this would have been a solid three stars, but the one barrel not fitting AT ALL knocked it down to two stars.

Terrible from top to bottom. The length of pull is too short, there’s no forend to speak of, and it kicks like a mule using moderately powered 12 gauge ammo. The only shining stars are the triggers and the sights, but all the crisp breaks and bright front sights in the world can’t overcome all of the other things that make this rifle so hard to shoot. It doesn’t actually fold down to the compact size you’d hope it would and makes for an ungainly backpack carry.

Sighted at POI/POA with the .22 barrel, it puts all rounds on a man sized target at 25 yards no matter what barrel you select. Individual groups seemed to be roughly the size of my hand, consistent with most handguns I’ve tested in those loadings. A tackdriver this is not.

It has Picatinny rails on the top and sides which would allow you to mount lights, lasers, and reflex optics.

Given the abysmal ergonomics, and poor fit and finish, I’m compelled to award no more than three stars. Lucky for the X-Caliber, there are precious few guns that do all the things this one does, so the field of competition is very thin. And given that it does gun like things at reasonable distances for the cartridges it’s loaded for, I really can’t fault it. There’s a tremendous amount of room for improvement in this gun, but I think doing so would make it like all the others, and this gun is better off being the weird kid in class.