On May 31, 2018, at about two o’clock in the afternoon, 23-year-old Noah Kolis was guiding three friends from Chicago. They started at his boyhood home near Cora, Wyoming. His dog, a Chesapeake-Lab mix, was with them, heading to some rock formations nearby. Polis was carrying his 460V Smith & Wesson revolver. Two other men in the party were carrying bear spray.

The two men with bear spray had fallen 50 yards behind when the dog alerted to something. Kolis thought it was a large animal. Then he saw the bears, a grizzly sow and cubs, uphill from their location.

He yelled at the dog, but it was too late. The dog came running back. The grizzly mama charged, moving extremely fast. His friend from Chicago bolted back down the trail. Polis had his revolver out, as the bear came to a stop, just a dozen feet away.

As he scanned the ground where the grizzly stood on all fours about a dozen feet away, the sight of the claws spurred the thought “Those will kill you.” His gut told him a second charge could be imminent. Adrenaline pumping, “my mind was quiet,” he said, as he then calmly pulled the trigger on his Smith & Wesson Model 460V revolver. The bullet struck the stationary bear in the cheek, and she fell.

Potential harm to himself averted, Kolis started “cursing up a storm,” mad at the situation and himself, as the bloodied bruin rolled down a steep hillside in the Bridger-Teton National Forest’s Boulder Basin. He shot at least three more times to end the sow’s misery, knowing the gravity of what had just happened.

“With the pull of my finger,” he said, “I just killed three bears.” 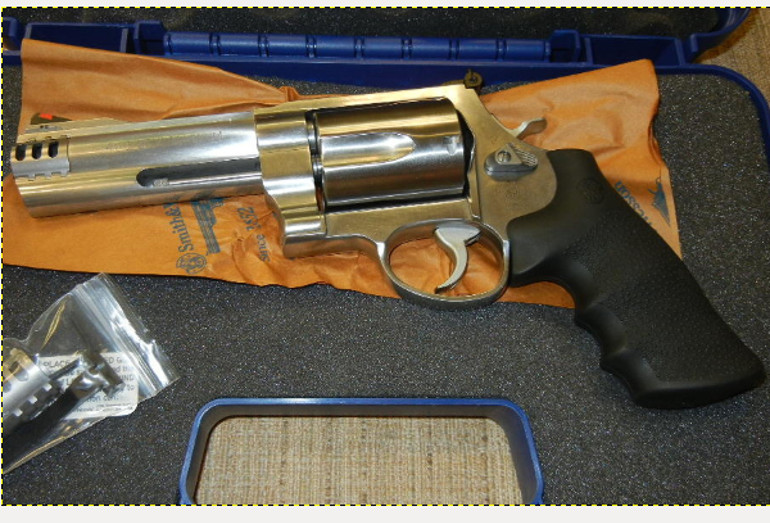 The Wyoming Game and Fish department investigated the shooting. They found it to be justified self defense.

“The dog saw the bear, the bear came after the dog, the dog ran back to the people,” he related.

The grizzly charged “head on” toward one man who was legally carrying a handgun and shot it several times as it ran to 10 feet in front of him.

One hiker carrying bear spray had it ready but couldn’t spray the bear because the other man was in front of him.

The sow had been involved in conflicts with people before. Cora, Wyoming is inside the Greater Yellowstone Ecosystem (GYE). Grizzly bears in the GYE have a bad record of being threatening to humans. In 2017, over five percent of the grizzly bears in the GYE were either shot and killed in self defense, or killed by government officials after being shown to be an serious threat to people and their property.  In 2017, that was 35 bears out of a population of about 690.

The bear Kolis shot was wearing a collar. The collar showed the bear had been trapped and collared after conflicts in the Upper Green River area. The sow had two cubs with her. There is a good chance the cubs won’t survive through the winter. Bear cubs have a high mortality rate. They are often killed and eaten by adult boar grizzlies.

The 460 S&W magnum is one of the most powerful pistol cartridges chambered in a revolver. This case illustrates how effective it can be at stopping a grizzly bear. Handguns have stopped bear attacks 97% of the time in documented cases.

Bear spray might have worked in this instance. It can be effective. In the studies most cited to recommend bear spray, the researchers refuse to release their data. Numerous flaws have been found in their methodology. The primary flaw seems to be in the selection of what cases to include in the data base. Most of the cases involving bear spray were with non-aggressive bears. In a study of firearm effectiveness by the same authors, most of the cases involved aggressive bears.

In this case, the bear had stopped only a dozen feet away. The situation was extremely dangerous. Kolis isn’t exactly a big game hunter. He said the biggest thing he had killed previously was a rabbit he hit with his car. Still, he was calm in the face of an extremely deadly threat. Others have said a magnum revolver in the hand calmed them enormously.

From The Longest Minute-Terrifying Bear Attack:

As I pulled the revolver out, a sudden calm came over me, and I knew everything would be fine.

Kolis kept his cool and did what he had to do.