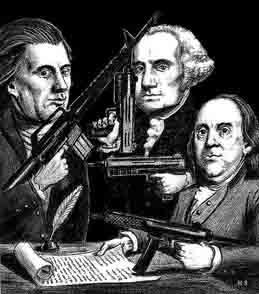 National Review Online covers a recent  forum hosted by the Fordham Urban Law Journal on where gun rights legal issues are going to be headed in the post-Heller and McDonald world. According to Robert VerBruggen, “judging by a conference hosted by the Fordham Urban Law Journal last Friday, the two sides of the gun-control debate have simply regrouped, recalibrated their expectations, and lined up for battle once again. As definitive as Heller and McDonald may seem, they offer little guidance to lawmakers and lower courts as to what kinds of gun control are still permissible.” Little guidance? Heller and McDonald settled the questions of whether the Second Amendment protects an individual right (it does), and whether that is a fundamental right (it is). So, um, how much more guidance is really needed?

By virtue of being 1) specifically enumerated in the Bill of Rights and 2) a fundamental right protected by the “due process” clause of the 14th Amendment, the Supreme Court has stated on numerous occasions that any possible infringements must withstand strict scrutiny. What does that mean exactly? Well, infringements of enumerated, fundamental rights are considered presumptively impermissible, so it’s up to the governmental actors (legislators, regulators, judiciary) to prove that they are in fact, allowable. There’s a three-pronged test and if the law fails any one of the tests it does not pass strict scrutiny.

1) The law or policy must have been passed to meet a compelling state interest. Although this term has never been specifically defined, it is generally held to be something so important that it outweighs individual rights. For instance, national security or protecting the lives of many people can qualify as such. Amorphous statements about ‘public safety’ or ‘an educated citizenry’ would not be considered compelling interests.

2) The law or policy must be narrowly tailored to achieve its purpose. In other words it must be written so as to address the specific compelling interest without going beyond that. If it’s either overly broad or fails to address any aspect of the compelling state interest, it will fail the test.

3) Finally, the law or policy must be the least restrictive means available for achieving that interest. Similar to the idea of being narrowly tailored, this test also asks if there exists a less restrictive way of accomplishing the compelling state interest.

On top of that we have a number of Supreme Court precedents which address different kinds of gun laws. For instance, in the case of Staub v. City of Baxley the court held:

It is settled by a long line of recent decisions of this Court that an ordinance which, like this one, makes the peaceful enjoyment of freedoms which the Constitution guarantees contingent upon the uncontrolled will of an official — as by requiring a permit or license which may be granted or withheld in the discretion of such official — is an unconstitutional censorship or prior restraint upon the enjoyment of those freedoms. [emphasis added]

So every may issue carry permit law in the country is unconstitutional.

It is contended, however, that the fact that the license tax can suppress or control this activity is unimportant …  if it does not do so. But that is to disregard the nature of this tax. It is a license tax – a flat tax imposed on the exercise of a privilege granted by the Bill of Rights. A state may not impose a charge for the enjoyment of a right granted by the federal constitution. [emphasis added]

So every shall issue carry permit law in the country which requires a fee be paid, is unconstitutional.

The Supreme Court has also held that requiring a literacy test in order to vote is discriminatory, so there goes every carry permit law that requires training.

As I mentioned in a previous piece, the Justice Department was opposing South Carolina’s Voter ID Act, stating that:

according to the state’s data … minority registered voters were nearly 20% more likely to lack DMV-issued ID than white registered voters, and thus to be effectively disenfranchised by Act R54′s new requirements.

And now, according to an AP story:

The Justice Department’s civil rights division on Monday objected to a new photo ID requirement for voters in Texas because many Hispanic voters lack state-issued identification.

Photo ID laws have become a point of contention in the 2012 elections. Liberal groups have said the requirements are the product of Republican-controlled state governments and are aimed at disenfranchising people who tend to vote Democratic — African-Americans, Hispanics, people of low-income and college students.

So there you have it. The ATF’s requirement for a photo ID on a Form 4473 is disarming people who tend to vote Democratic, it’s discriminatory and therefore unconstitutional.

See how easy this is? All you have to do is look at existing precedents to find lots of unconstitutional gun laws.