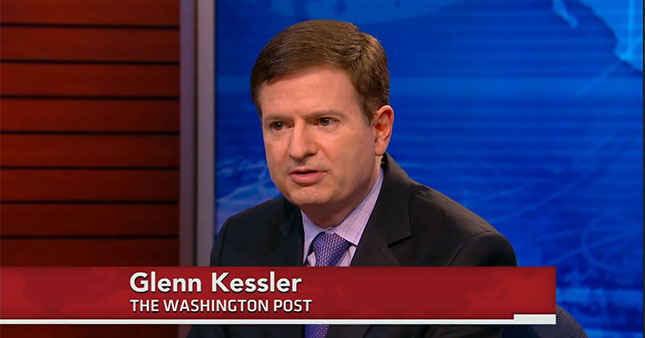 Ever since the New York Times started making stuff up on slow news days, the Washington Post is the paper I now turn to when I’m feeling a little masochistic and want a firehose full of self-righteous east coast establishment elitism along with my daily news. (Excluding the excellent Volokh Conspiracy blog hosted by the WaPo, of course, which is worth reading for positive reasons.) Despite my trepidation, I’m far more willing to read the WaPo because, unlike the legacy print media in New Netherlands, their reporters still seem to adhere to an anachronistic concept of news reporting that requires them to at least try to tie their half-baked opinions to some sort of fact that actually happened. As long as they’re not too busy binge-watching the latest season of House of Cards or something . . .

I’m pleased to be able to report that the WaPo has met my insanely low standards for legacy print media yet again.

Glenn Kessler, writer of the WaPo’s “Fact Checker” blog, takes aim at a recent appearance by Senator Marco Rubio (R-Fla.) on CBS’s “This Morning”, in which the Sunshine State stalwart made the following claim:

None of the major shootings that have occurred in this country over the last few months or years that have outraged us, would gun laws have prevented them.

Mr. Kessler suggests in his post that initially, this seemed like it would be an open and shut case:

A colleague pointed out this statement by Marco Rubio as a possible fact check, suggesting that it was almost certainly incorrect. It posed an interesting challenge, given the reams of data to examine.

It turned out that once he started looking at the data, it was, indeed an open and shut case. Just not in the way he initially suspected. Kessler took a look at the database of mass shootings maintained by the (odiously anti-second amendment) Mother Jones newsmagazine and looks at twelve major multiple victim public shootings from that database, analyzing along the way whether or not Rubio’s statement was correct in light of the facts of that particular situation. His conclusion?

Rubio’s statement stands up to scrutiny — at least for the recent past, as he framed it. Notably, three of the mass shootings took place in California, which already has strong gun laws including a ban on certain weapons and high-capacity magazines.

Gun-control advocates often point to the experience in other countries that have enacted gun laws that heavily restrict gun ownership; as we have shown, quantitative measures of cross-comparative crime statistics, especially where the crime is not consistently defined (i.e., “mass shooting”), usually end up being apples-to-oranges comparisons. It is possible that some gun-control proposals, such as a ban on large-capacity magazines, would reduce the number of dead in a future shooting, though the evidence for that is heavily disputed. But Rubio was speaking in the past, about specific incidents. He earns a rare Geppetto Checkmark.

The “Geppetto Checkmark” is the rating from the Fact Checker blog’s rather twee “Pinocchio Test” of truthfulness, and is Kessler’s way of saying that Marco Rubio’s statement about guns is “the truth, the whole truth, and nothing but the truth.”

It’s a sign of how low my expectations are to hear the truth about guns in any of the legacy media that reporting of a simple fact like this is considered significant enough to note to write a post about it. But it is, and so there we are. Kudos, WaPo, on a job….done

Now, if only we could get Mr. Kessler to fact-check his own newspaper’s editorial board.