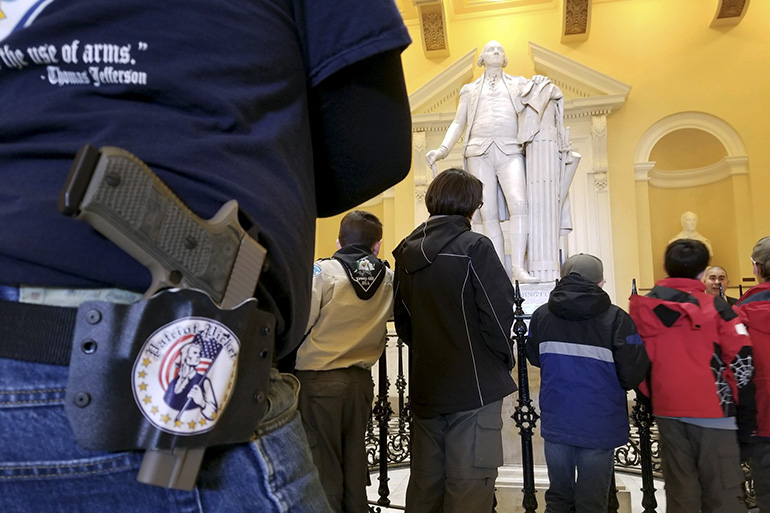 Virginia Democrats, humiliated by a Second Amendment sanctuary movement sweeping the Old Dominion, are now looking to retaliate against gun owners who openly carry their sidearms into the state capitol complex.

Virginia is one of the few states in America where citizens can enter the Capitol building to criticize anti-gun legislators while armed.

The leftist legislators scheming to ban the carry of firearms under the Capitol dome—as well as on all Capitol grounds— comes just a month before the expected arrival in Richmond of thousands of armed Second Amendment supporters the annual Virginia Citizens Defense League Lobby Day. The Lobby Day regularly drawn about a thousand people to hear gun rights speeches before dispersing to meet with legislators, but much larger crowds are expected for 2020 event. The incoming House of Delegates Speaker Eileen Filler-Corn has confirmed to the Virginia Mercury that she and her fellow Democrats are considering a Capitol Grounds gun ban as the first order of business when Virginia’s legislature comes into session on January 8th.

“That is definitely something that we have discussed amongst us” Filler-Corn told the Mercury, “but we’re not willing to say what direction we’re going in.”

The predictions of an overwhelming turnout for Lobby Day on January 20th follows the pronouncements from statewide Democrats that harsh new gun control measures—including possible AR rifle confiscations—are on the table this session.

Lobby Day 2020 is now expected by some to draw as many as 10,000 people—many of them armed. A TTAG survey shows that many hotels in the Richmond area are now reporting a scarcity of rooms available for January 19th, the day before the event. The Virginia Citizens Defense League demonstration agenda for January 20th follows their decades-long practice of first presenting a series of speeches to the Second Amendment supporters who gather next to the venerated Clock Tower on the Capitol grounds.

Later, citizens will disperse to then be guided by VCDL leadership teams, forming groups to tour the Capitol building plus executive offices and encourage legislators to honor Virginia’s strong Second Amendment traditions. While the enactment of most laws is routinely delayed until the middle of the year, the new Democrat majority in Richmond appears to be scrambling fast-track legislation to ban armed citizens from the Statehouse and grounds sometime in the next few weeks.

State Senator Adam Ebbin, a Democrat representing the reliably anti-gun Northern Virginia district of Alexandria, has suggested to the Virginia Mercury that an immediate gun ban could be enacted through what’s known as the General Assembly’s “rules resolution” process.

To many observers, the Democrat Party maneuvering to ban firearms in proximity to their legislators is a petulant and agitated response to the VCDL’s hugely successful campaign over the past month to have a majority of Virginia jurisdictions declare themselves Second Amendment sanctuaries.

According the VCDL’s tally, more than 100 Virginia counties and incorporated towns have declared 2A Sanctuary status, or have announced resolutions demanding that Democrats in Richmond immediately abandon their unconstitutional infringement plans in favor of a focus on criminal and judicial issues.