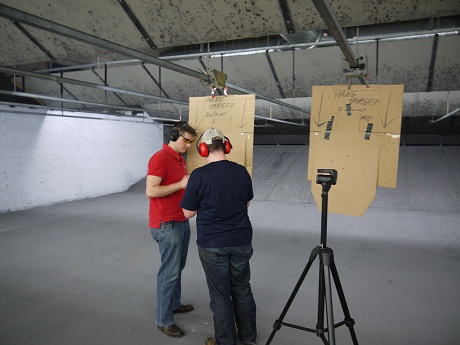 A few weeks ago I asked our readers to give us some ideas of firearms myths and related subjects to test. One of the first people to chime in was our very own fearless leader, who handed down a real noodle scratcher. His question: do ported handgun barrels decrease night vision?

The scenario RF had in mind is a typical home defense situation. You’re in bed asleep when something goes bump in the night. You grab your bedside pistol, bad guys rush in, and you fire. What RF wanted to know was whether a top-ported barrel would vent the exhaust from the round into your line of sight and blind you, possibly slowing down follow-up shots.

To test RF’s question about the top-ported barrels we needed three different guns, all firing identical ammo out of identical length barrels. The first revolver would be a control (no porting). The second revolver would to be a top-ported revolver. The third pistol would need to be a side-ported revolver— to determine if any decrease in night vision was due solely to the porting or if position was a factor. Luckily RF had three such pistols lying around TTAG HQ. 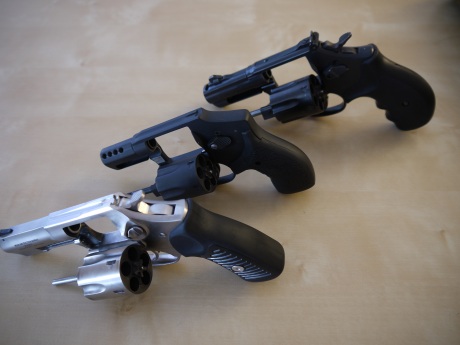 I try to keep politics out of my writing as much as possible (Lord knows RF does enough of that around here for all of us). But I just had to mention this one minor hiccup in our plans. We would have finished this test two weeks ago except Virginia does not allow the purchase of more than one handgun in a 30-day period. The only way around this: a Virginia CCW permit.

Luckily, I had filed for my permit over a month before RF sent me the revolvers; otherwise we would still be waiting another 30 days to pick up the last gun. My permit came in two weeks after the handguns. In the meantime I was able to write a review of the top-ported Performance Center Smith & Wesson 67-5 (top right). The other two guns were a Gemini Customs side-ported Smith & Wesson 642 and a bone stock Ruger SP101.

The test consisted of two smaller tests. The first test was designed to determine the size and shape of the muzzle flash of each pistol. The second test measured the effect of that muzzle flash on human response time. All ammunition was Sellier & Bellot .38 Special lovingly provided by LuckyGunner.com.

To gauge the size of the muzzle flash from the shooter’s perspective, I placed a camera directly behind the pistol in the shooter’s line of sight. Using the camera’s viewfinder, the shooter positioned and aimed the pistol and pressed the shutter when ready. The camera then initiated a two-second delay, after which the shutter would open for one full second to capture all of the light emitted by the firearm. The camera was set to use auto-focus, ISO 100 and f/3.5. Each revolver was fired five times in the dark and the photographs were later compared.

The second test included four test subjects. Three of them TTAG writers; the last was a press-ganged photographer friend. Each subject fired each of the three guns once in the light and once in the dark. Subjects started from a low-ready position facing two IPSC targets approximately five yards away. At the sound of an IPSC timer, they engaged the target on the left once, then transitioned to the target on the right and fired three more times. The time (from the buzzer going off to the last round fired) was recorded along with an image of the second target.

Each pistol was fired five times, and the picture with the brightest muzzle flash was used for comparison. All images are linked to their larger versions, click on them to see the enlarged versions.

The first handgun fired was the non-ported revolver. As evident in the image, the largest flash from the perspective of the shooter is the result of the gasses escaping from the gap between the cylinder and the forcing cone in the barrel. The large flash to the left in this image was an anomaly, of all the five images taken of this pistol this is the only one with such a large flash to one side. 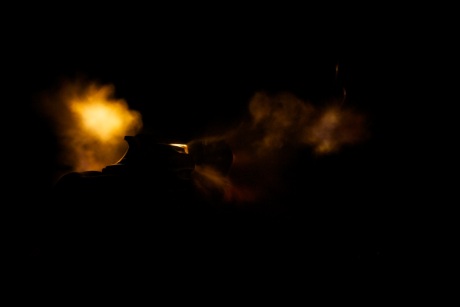 A side view of the revolver taken by Michael Dobbs (the press-ganged photographer) more accurately shows the position of the escaping gases. 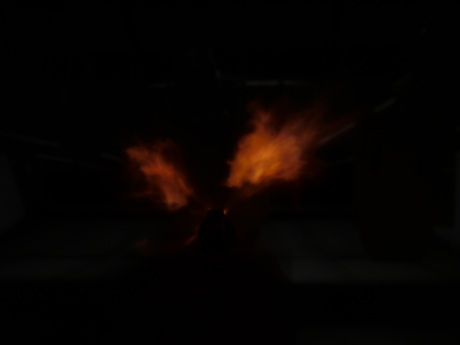 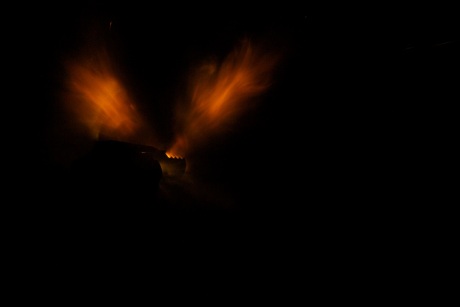 Again, the side view of the revolver pinpoints the location of the escaping gases. While some gases are seen escaping from the cylinder gap, the majority of the gases seem to prefer the ports along the side. 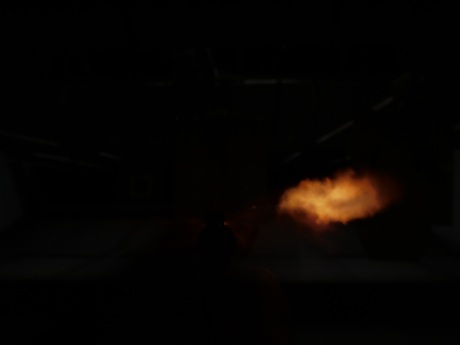 In contradiction to our hypothesis, there was no fireball seen jetting from the top port in the top ported pistol. Instead, the gases escaped through the cylinder gap in a manner similar to the non-ported pistol. However, these side emissions were both larger in size and luminosity as well as being more consistent. 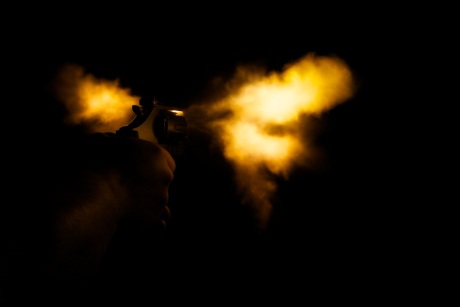 The side view confirms that the emissions form the cylinder gap are both brighter than the same emissions from the non-ported gun and in roughly the same location. This may be due to a larger space between the cylinder and forcing cone, allowing more gases to escape via that gap. 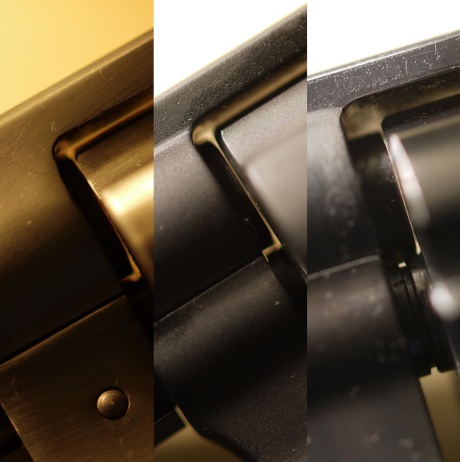 This image is a close-up of the cylinder gap on all three revolvers. The non-ported Ruger SP101 is on the left; the side-ported Gemini Customs-modified Smith & Wesson 642 is in the middle, and the top-ported Smith & Wesson Performance Center Model 67-5 is on the right. It indeed appears as though there is more of a gap between the cylinder and forcing cone of the top ported revolver as opposed to the non-ported revolver. 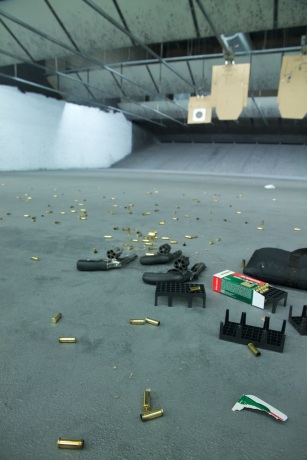 After all four participants had run the course the individual times were averaged together to form a better idea of how the average person’s night vision would be affected. The following chart represents those average times in a bar graph format. The vertical axis represents time, the horizontal axis breaks out the times between the type of barrel, and the colors represent the lighting conditions. 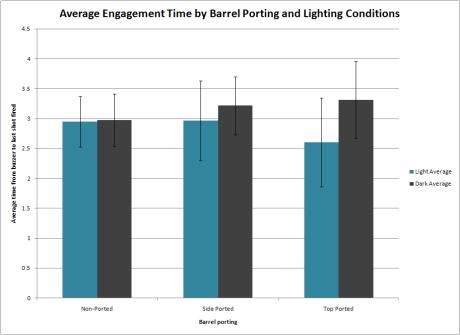 As shown in the graph, there is a definite difference in the engagement time between the types of revolvers.

Despite the muzzle flash of the non-ported and side-ported handguns being roughly equivalent, there is a noticeable increase in the time it takes to run the course in the dark over running it in the light with the side-ported gun—more of a difference than with the non-ported firearm. This suggests that the position of the muzzle flash may affect the shooter’s night vision.

The discrepancy in times is even larger with the top-ported barrel. However, as the pictures indicated, the top port did not actually produce a fireball in the shooter’s line of sight. Instead, the top-ported revolver produced a muzzle flash similar in size and location to the non-ported revolver—except much brighter. This suggests that a brighter flash—regardless of position—degrades the shooter’s night vision more than any change in position. 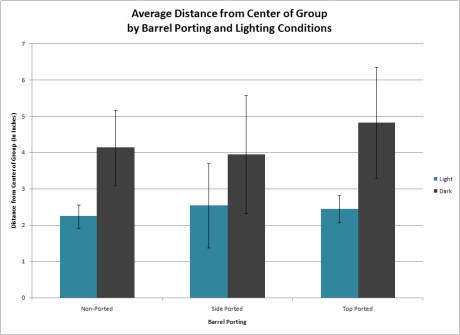 The effect on target was calculated as the average distance from each impact to the center of the group (two rounds 4 inches away would be an average of 2 inches from the center of the group). All calculations were done using the On Target software. As shown in the graph there was a definite change in the accuracy of the shooters between shooting in the dark as opposed to in the light, and the largest change was seen in the top ported pistol. These results are consistent with the time based results and support the same conclusions.

According to the Test 2 results, the top-ported barrel decreased the shooter’s night vision more than either the side-ported barrel or the non-ported barrel. However, as shown in Test 1, this was due to the brightness of the flash coming from the cylinder gap, not a muzzle flash directed into the shooter’s line of sight.

From these results it is my conclusion that while the position of the muzzle flash does degrade the night vision of the shooter, the brightness of the flash is a larger factor.

Based on this conclusion, when purchasing a pistol for home defense or concealed carry, the buyer should be far more concerned about the size of the gap between the cylinder and the forcing cone than whether or not the barrel is ported and/or where the porting holes are located on the barrel.

While a ported barrel does seem to increase the transition time between targets in the dark, having a large flash from the cylinder gap increases that time by a factor of three. Ported or not is up to shooter’s preference, according to their desire for its minimizing effects on felt recoil [not tested here]. Just make sure the cylinder is snug against the forcing cone.