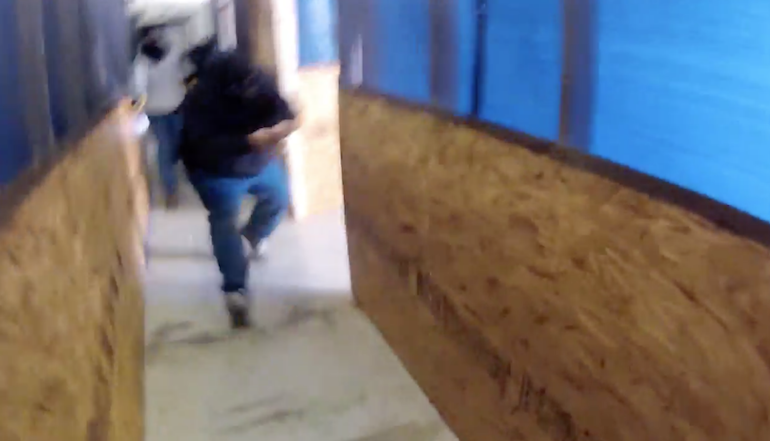 On Sunday, December 30, 2012, The Truth About Guns joined forces with King 33 Training to perform a series of live fire simulation of active shooter scenarios. We wanted to assess the potential impact of armed personnel on school property during an event like the tragedy in Newtown, Connecticut. This article will serve as the “Key Findings and Executive Summary” of the results from that experiment, providing a single article that discusses the results. It contains a link to the full report at the end . . .

At the King 33 facility in Connecticut, 11 volunteers and five staff members enacted a series of simulated shooting scenarios with the intent of determining whether an armed teacher or armed guard at a school such as Sandy Hook Elementary would have been able to successfully confront and interdict an active shooter.

When designing the scenarios for this experiment, care was taken to identify moments during the progression of a “typical” active shooter case where armed intervention may have been effective in interdicting the shooter. Three such moments were identified:

1. The moment the shooter enters the school building

2. The moment the shooter enters a classroom

3. The moment an armed response arrives on scene.

One of these scenarios (when the shooter entered the classroom) was enacted both with and without any advanced warning that the shooter was coming. In the first case, the control allowed sufficient time for the teacher to enact a standard “lockdown” procedure such as the one implemented at Sandy Hook Elementary (approximately 15 seconds).

For scenarios where no advanced notice was given, unarmed participants were instructed to leave and re-enter the area being defended at random to simulate normal traffic. This protocol was implemented keep the defender from being able to react to an event (e.g., the door opening) instead of the first sight of a gun or the sound of a gunshot, as would be the case during a real shooting.

Scenario 1 consisted of a single armed guard seated behind a desk, facing the entryway. This position is consistent with many current configurations for schools, enabling the security guard to watch the front door and challenge visitors to the school during the day.

Unarmed participants were then walked out an opening in the wall and past the guard until the shooter emerged from the opening and engaged the guard. The guard was not aware of exactly when the shooter would emerge and therefore had no specific advanced warning.

[This type of scenario attempts to replicate situations where the shooter is carrying the firearm concealed into the school, or the security guard does not have sufficient warning through cameras or other means to alert them that an armed intruder is about to enter the school.]

According to the results from our testing, in this scenario the armed security guard appears to be ineffective at interdicting the active shooter. While the “shooter” can choose their moment to attack and prepare themselves to fire the moment they are seen by the security guard, the guard has insufficient time to respond.

In future experiments we would like to investigate the effectiveness of an armed guard when there is advanced warning, such as would be provided if the shooter was visible through a door.

Scenario 2 involves a shooter making entry without warning into a classroom setting where the teacher is carrying a concealed weapon. As previously mentioned, students were encouraged to exit and enter the room at random to keep the teacher from knowing when the shooter would enter the room. The teacher had no specific advanced warning of the shooter’s presence, and was not given any instructions or training on how to react.

The results of this scenario were mixed. They depended on the level of training of the shooter and teacher.

By contrast, round 5 pitted a national-level competition shooter as the “shooter” against an older retired law enforcement officer as the “teacher.” The shooter was able to neutralize the teacher before he could even begin to draw his weapon.

While not all “teachers” were able to successfully stop the shooter, the data suggests that armed teachers would be beneficial in situations where there is no advanced warning.

If the teacher is ineffective then there is no difference from the baseline “risk” associated with a shooting scenario such as this; the natural tendency seemed to be for the students to retreat and not get in the line of fire between the teacher and shooter. Thus, the probability of students being shot accidentally by a firefight in the classroom is very small.

If the teacher is effective in stopping the shooter (as they were in some situations) there is a definite decrease in the number of potential casualties in the room, as the threat has been completely removed.

The experiment did not investigate the possible deterrence effect of an armed teacher or on-scene first responder. It’s important to note the probable psychological effect that the knowledge of an immediate armed response would have to prospective active shooters.

Future experiments should investigate whether the direction that the door opens has an impact on the effectiveness of the teacher.

Scenario 3 was identical to the configuration of scenario 2 with the exception that the classroom had approximately 15 seconds warning that there was an active shooter on scene. When the teacher heard gunshots, they were instructed to perform a basic “lockdown” procedure as implemented in some schools: gathering the children in one corner of the room before attempting to interdict the shooter as they entered the room.

In every instance where scenario 3 was played out, the “teacher” successfully prevented the shooter from entering the room, often without a single casualty among the “students” or even a single round fired on the part of the “shooter”. In this scenario, an armed teacher was extremely effective in stopping an active shooter.

Future experiments should explore the difference in shooter’s behavior when they are uncertain that there is an armed teacher.

Scenario 4 began with a shooter entering a classroom full of students with no armed teacher present and opening fire. On hearing the gunshots, an armed responder (either an armed guard or another teacher, for the purposes of this experiment it was not important) who was standing 25 yards from the classroom door was instructed to rush to the scene of the shooting and engage the shooter.

Like scenario 2, the successful interdiction of the shooter depended on the level of training of the participants.

When responders were participants with high levels of training, such as a military background or law enforcement training, they were successful in immediately engaging and stopping the shooter.

However, responders with little or no training the results were notably less capable. Not only did some responders fail to effectively engage the shooter, in one instance they actually shot a “student” fleeing the room instead of the shooter.

For this scenario, an armed response was only completely effective when the responder had adequate training. Those with insufficient training were able to engage the shooter as well, but results were less impressive.

This experiment was a preliminary test, providing a proving ground for the methodology and scenarios selected for testing before being implemented in a large scale test at a later date.

Based on the limited data collected from this experiment it appears that an armed teacher would save lives in an active shooter scenario. The caveat: the teacher’s effectiveness depends on their level of training. Maximum effectiveness of an armed teacher of any skill level is achieved with advanced warning of the approaching shooter and implementation of a classroom “lockdown.”