The latest argument against gun registration . . . Hey, NRA! What About Patients’ Gun Rights?

Section 134-7(a) is disqualifying Hawaii patients because: “No person who is a fugitive from justice or is a person prohibited from possessing firearms or ammunition under federal law shall own, possess, or control any firearm or ammunition therefor.”

As I grew up in gun-lovin’ Idaho, one of the primary reasons NRA members would give me for fighting any sort of firearms registration requirement was that we couldn’t trust the government to maintain a list they could use to take people’s guns away. It’s almost as if the left doesn’t care whether gun control really works . . . The futility of gun laws

Abdul Razak Ali Artan injured 11 people on the campus of Ohio State University using only an automobile and a butcher knife. The Tunisian-born Mohamed Lajouaiej Bouel killed eighty-four people in Nice, France, running them down with a truck. Those who are determined to kill may use homemade bombs, knives, automobiles or toxins. There can never be fashioned an effective legal defense against murder.

President John Adams expertly articulated the root problem 250 years ago saying, “We have no government armed with power capable of contending with human passions unbridled by morality and religion.” Democrats and their fake-news mouthpieces are today’s enemies of morality and religion. Their libelous charges, vicious slander and irrational hate are the toxic and deadly agents that foment the kind of violence that we observe and abhor. 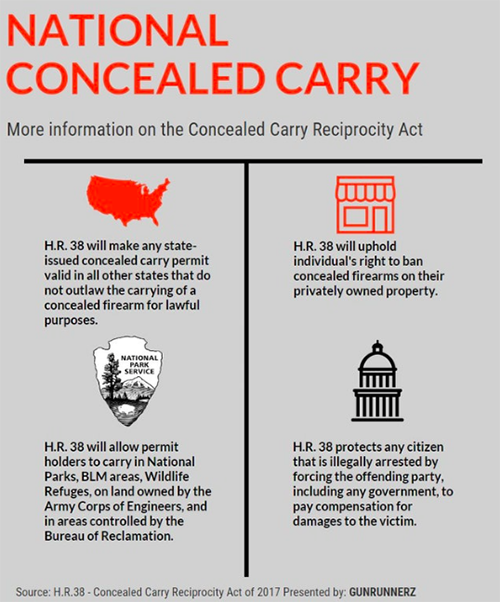 We’ll believe it (and open the champagne) when we see it signed by the President . . .  The NRA’s Dream Bill Is Getting Remarkably Close to Reality

The possibility of a person walking through a crowded national park, or even your local playground, with a gun concealed on his hip may not be as unlikely as it once seemed. That’s because over the past few days a remarkable amount of progress has been made on a bill that would force states to recognize concealed carry permits from other states.

It’s the National Rifle Association’s dream bill. And it is closer than it has ever been to becoming law.

This week the House Judiciary Committee passed the Concealed Carry Reciprocity Act of 2017 (PDF), which also would allow off-duty officers to carry weapons in school zones, after the NRA labeled the legislation its “highest legislative priority in Congress.” Many civil protection orders, especially in domestic violence cases, ban the target from possessing guns. Courts generally uphold these as permissible restrictions, at least when the order is based on a finding that the target had committed a violent act or had threatened violence; see, e.g., U.S. v. Bena (8th Cir. 2011). But the matter is not entirely clear, especially since such orders can often be entered on just a finding of preponderance of the evidence, following relatively truncated procedures where the defendant doesn’t have a lawyer. (This makes them different from felony convictions or even violent misdemeanor convictions, which require proof beyond a reasonable doubt, and in which the defendant generally has been represented by a lawyer.)

The Stag 15 Minimalist in 5.56 NATO (.223) is built on MIL-Spec forged 7075 aluminum receiver with Type 3 hard coat anodizing, a MIL-Spec single stage trigger, a MIL-Spec manganese phosphate coated M16 BCG and a 16-inch chrome-lined, government profile barrel. MFT accessories complete the Minimalist build with the MFT Battlelink Minimalist MIL-Spec stock that has an angled non-slip rubberized buttpad for quicker presentations, even while wearing body armor. The upper section of the MFT stock has an enhanced cheek weld and a QD sling mounting point is positioned for ambidextrous use . . .

MFT’s TEKKO Polymer AR15 carbine handguard with M-LOK rail provides a secure platform for the mounting of Picatinny rails and other accessories. The single stage trigger is housed within an MFT E-VolV Enhanced Trigger Guard with an oversized opening that allows full access to the trigger, even with gloves. The MFT ENGAGE™ AR/15/M16 pistol grip has textured finger swells and a grooved backstrap for a positive grip surface even wearing gloves or in wet conditions.

The pistol grip also features a secure, water resistant storage compartment and a plug retention for one-handed storage access. The MFT flip up rear sight is a low profile, snag resistant design paired with an A2 front sight with full elevation adjustment for rapid target acquisition. Finally, the Stag 15 Minimalist Rifle comes with a 30-rd MFT Polymer Magazine engineered as an enhancement of the standard STANAG design with a stippled texture and low-profile front ribs with a flared floor plate for positive extraction and handling.

Yikes . . . Homeowner shot while peering out window in Portage (MI)

Portage police say a 69-year-old woman was shot inside her own home as she peered out her bedroom window to see who was knocking on her door.

It happened around 1:15 a.m. Thursday in the 2600 block of Woodbine Avenue near Portage Road and Austin Lake.

The Portage Department of Public Safety believes the suspects knocked on the front door, then fired several rounds into the bedroom window next to the door when the victim looked out.

Competition shooters, get “back into action” with the new features of the Performance Center Model 686 with a 4 inch threaded barrel!

Whoopi for gun rights! The View from here looks good. Not great; “I’m not interested in an AR15 to shoot deer as if the deer are in ISIS.” But good. Oh, Canada . . . Quebec shooting victims want Trudeau to do something about gun violence

A coalition from Quebec is calling on the Trudeau government to live up to its promises on gun control. The group includes survivors of the Montreal Polytechnique massacre in 1989, and of the more recent fatal shooting at the Quebec City Mosque. They want the government to recognize “the human costs of weak laws, including flaws related to possession permits, gun sales and the availability of assault weapons.”

Now, to be clear, the Liberals did not promise much on gun control in 2015. In fact, they pointedly promised not to reinstitute the previous Chrétien Liberal government’s long gun registry, which the Harper folks abolished.

The Trudeau Liberals made a number of low-profile, small-bore promises on guns. The most consequential of those was that they would “immediately implement the… gun marking regulations that have been repeatedly delayed by Stephen Harper.” Halfway through the Liberal mandate, it appears that a tendency to delay on that simple measure, which some experts say might even be even more effective than a gun registry, is a habit of federal governments, regardless of their political stripe. From the land formerly known as Great Britain . . . Clint Eastwood film prop is handed in to police during gun amnesty

But after a prop he used in a 1968 war movie was handed in nearly 50 years later during a weapons amnesty, perhaps even Clint Eastwood will raise an eyebrow in surprise.

The sub-machine gun wielded by the US star in Where Eagles Dare was taken to Bridgwater police station in Somerset by a former film worker.

Officers confirmed it is not a functioning weapon, although it could pose a risk in the wrong hands as imitation firearms have been used in robberies.

A Shotgun Shell That Cleans Your Bore?