The ChiComs are building their small arms around four different 5.8mm rounds . . . China Is Now Making Some of the Most Powerful Guns on the Planet

China’s People’s Liberation Army has traditionally relied on foreign and Communist bloc weapons manufactured in China under license—or not. Now, however, as the PLA undergoes an unprecedented modernization, a new generation of locally designed and manufactured light weaponry is arming China’s armed forces, from handguns to light machine guns.

China’s first modern, locally designed and produced assault rifle is the QBZ-95, currently standard issue across the People’s Liberation Army and China’s internal security force, the People’s Armed Police. The weapon first entered Chinese service in the mid-1990s. The QBZ-95​ is a so-called “bullpup” rifle, meaning the trigger and fire-control group are placed ahead of the magazine, which is inserted into the rifle stock. 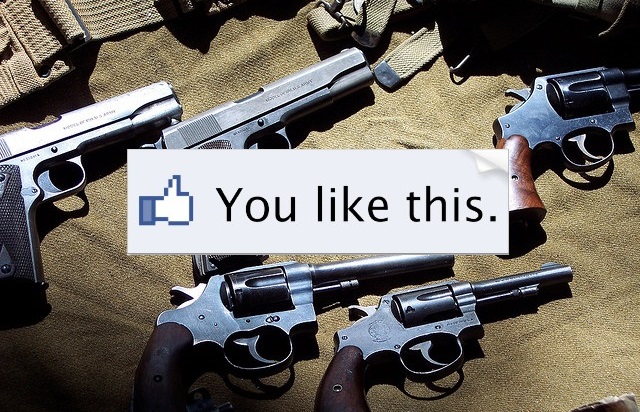 Despite Facebook’s ban on firearm sales on Jan. 29, 2016, group pages on the platform persist in facilitating gun and ammunition transactions among private sellers throughout America. As of last week, there are at least six groups with similar gun postings for Missouri residents alone, with a total membership of approximately 2,600. Still, there is likely more activity going on in secret groups such as Reel’s “417 gun pics” that aren’t visible to anyone except the members. Like many private gun sales, in most cases no background checks are required by law.

Facebook has reacted to the continued sales. The site removes groups and posts all the time.

But, Facebook’s personnel don’t want to overstep into its users’ privacy. So, Missourians continue their gun transactions on Facebook, in private. In the aftermath of the Sandy Hook Elementary School shooting five years ago, districts have moved to bolster security, especially at elementary schools, which traditionally have not had police assigned to them like many high schools and middle schools. Many have hired retired officers, firefighters and other responsible adults — an approach that’s less expensive and potentially less intrusive than assigning sworn police, but one that also has raised questions about the consistency of training and standards.

Nationally, there is a patchwork of state laws addressing requirements for school safety officers, and many leave it entirely up to local school boards. Some states, including Connecticut, have weighed legislation to impose standards for non-police security inside schools. Our man Weingarten standing guard outside an Arizona church. Too much? . . . Open Carry at The Vertical Church with AR15 and Radio

Open carry at The Vertical Church in Yuma is common. It is not so common to see a rifleman outside of the front entrance.

The Church takes security seriously. There is a dedicated security team that has several members at each service. Some members carry openly, some carry discreetly.

There is nearly always double coverage as most security team members serve at one service and attend worship at another.

Team members switch between open carry and discreet carry as is convenient. In a Philadelphia courtroom Sept. 19, Theresa Stuhlman faced down one of her husband’s three killers.

“It is so very hard to believe,” she said at the sentencing hearing, “that the three individuals that are responsible for Jim’s death were 14 and 15 years old at the time, which is the same age as my daughter is now.”

James Stuhlman, 51, a businessman, husband, and father, had been out walking his dog in Overbrook Park on the night of March 12, 2015, when the three teens accosted him, roughed him up, and took his money.

Once, this would have been a mugging, an unfortunate reality of urban living. Instead, it was a murder. The eye of the beholder . . . The Punisher Isn’t Anti-Gun. It’s Pro-Freedom.

It’s a key scene in the show, setting the tone The Punisher isn’t going to shy away from discussing how individuals should have the ability to protect themselves. The show tackles this issue throughout its 13 episodes, bringing multiple viewpoints to the table. It’s almost impossible not to do because Castle is a gun-toting vigilante, who will use these weapons to go after those who deserve punishment.

Yet, for some reason, the pro-gun control mob has decided to use The Punisher as some sort of champion for more gun laws or mewl the show didn’t do enough to promote gun restrictions. The Verge’s Laura Hudson complained the show is just a, “common and exploitative form of the revenge story, one that imagines horrible crimes and injustices in order to justify the violence fans want to see on screen, and to absolve their consciences for wanting to see it. Each cruelty and mustache-twist of the villain stokes is calculated to enrage and horrify, until knives or bullets sliding into bodies is finally experienced as pleasure and relief.” “Camp Hamp” calls off pro-campus carry speaker at the last minute, citing their own lack of preparation. Better luck next time! . . . Via Facebook

Hampshire College sincerely apologizes to Antonia Okafor for canceling her speech tonight that was to have been held on our campus. The College did not follow its own procedures in sufficiently reviewing the application before we approved it.
We take responsibility for that mistake. We did not cancel the speech because of the speaker, the subject of the speech, or the content. Hampshire College values academic freedom and the careful examination of ideas, including when those ideas may be controversial.

We canceled the event when we realized that the student application was not sufficiently complete. It lacked the necessary details we require in advance of any event, particularly one that might draw large audiences and intense debate, so we can allot the appropriate resources to staff and support the event.

We will reach out to Antonia Okafor- Black, Armed, and Conservative and to the student organizers with an offer to discuss this process and consider options for rescheduling her visit to campus.