The term ‘sh!tshow’ doesn’t even begin to describe the school, the district or the Broward County Sheriff’s response . . .

Two months before the massacre at Stoneman Douglas High School, a retired Secret Service agent warned administrators that the school could be vulnerable to a gunman.

Gates were unlocked. Students did not wear identification badges. A fire alarm could send students streaming into the halls. Active-shooter drills were inadequate, he said.

The retired agent, Steve Wexler, said he made his point by strolling through the school with Post-it notes, attaching them to places his bullets or knife would land if he were an intruder. No one stopped him, he said.

In an interview with the South Florida Sun Sentinel, Wexler said he was invited to analyze the school’s security and presented his recommendations to four staff members.

“I said, ‘This stuff is blatantly obvious. You’ve got to fix this,’” Wexler said.

He never heard another word from the district, he said.

Even as it is beset by gun violence, Chicago likes to claim it has some of the strictest gun laws in the country. “I laugh because that’s not true,” Chicago Police Superintendent Eddie T. Johnson said Thursday. “For the first six months [after the law making gun possession a felony passed], we could not find a gun out on the street. But it actually takes three times for them to be treated like a felon” by Chicago’s courts, where judges and prosecutors were reducing gun charges to misdemeanors, and the word quickly spread. Soon, it was back to violent business as usual.

Johnson spoke at a gathering of the nation’s big-city police chiefs in Washington on Thursday, exchanging ideas on what works and what needs to change to stem the tide of shootings in urban America. The Police Executive Research Forum, a Washington-based think tank that advises the chiefs on policy issues, then released an “Action Plan to Reduce Gun Violence,” which included items such as Johnson’s call for laws to serve as actual deterrents to criminals, stopping guns from entering the black market and improving threat assessments for possible mass shooters.

‘Make Sure Not to Talk Any Arabic’: American Muslims and Their Guns

The Second Amendment Is for everyone. Period . . .

Gun ownership was the preserve of white men since before the nation’s founding, when the colonies prohibited women and slaves from owning firearms and banned sales of guns to Native Americans. As the right to own a gun expanded, so did tensions. After armed members of the Black Panthers occupied the State Capitol in 1967, California passed a law banning the carrying of loaded firearms in public.

The American Muslims we interviewed recently said their decision to own guns was simply a matter of exercising their hard-earned rights.

One of them is Nezar Hamze, a deputy sheriff in Broward County, Fla., who is also active in the Florida chapter of the Council on American-Islamic Relations, a national civil rights group.

“I’d rather have it and not need it, than need it and not have it,” he said of the Second Amendment. 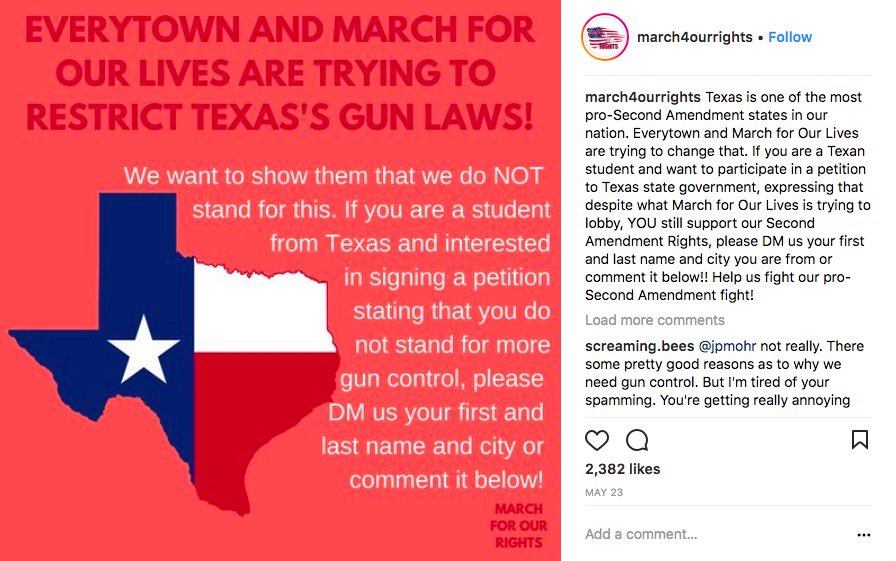 This group doesn’t have a shadowy nation-wide collection of civilian disarmament advocates funding their efforts . . .

A group of pro-gun Texas students is challenging Parkland survivors in their attempt to push gun control after the Santa Fe High School shooting last month.

The group, called March for Our Rights, sent a letter to Gov. Greg Abbott urging him to consider its pro-Second Amendment viewpoint. The letter came in response to another letter sent to Abbott and signed by organizers of the pro-gun control group March for Our Lives.

The letter, published as a full-page ad in the Houston Chronicle, called for policy change and asked Abbott not to pander to the gun lobby.

March for Our Rights said that while it didn’t have the money to take an ad out, it wanted Abbott to know it supported the Second Amendment.

“The logic of the argument for those calling for stricter gun control laws, in the wake of recent school shootings, is that something has happened to guns…” https://t.co/iBkIL786NJ