Everyone knows that many of Kel-Tec’s firearms are difficult to find. At normal dealer price, as opposed to paying way over MSRP, they can be nearly impossible to get. Due to how clearly supply lags behind demand in many cases, there’s a lot of finger-pointing and blame, a lot of well-intentioned ‘suggestions,’ and plenty of rumors. All of which were in evidence in the comments to my PMR-30 review from six months ago and in basically every Kel-Tec-related post before and since. Recently I had the chance to talk to Kel-Tec and get a high level overview of why this problem actually exists and what the company is doing about it. Unless it’s specifically quoted below, the following is mostly my paraphrasing rather than direct quotes from Kel-Tec . . .

First and foremost, I think many people are surprised to learn just how big Kel-Tec CNC Industries, Inc. actually is. This ~20-year-old American firearms manufacturer which turns out 100% made-in-the-USA guns, employs just over 200 people and shipped about 117,000 firearms last year. That production level makes it approximately the sixth largest handgun manufacturer in the U.S.

Certainly, a comparison in production capabilities to firearms manufacturers that are decades or as much as a century older can leave Kel-Tec playing catch up in some respects. A product line of 10+ firearms, many of which are highly sought-after, has created a lot of demand and an impressively long backorder list. As you may have noticed. Hey it makes sense. The demand is there so the business case to expand to meet it is almost certainly there as well. Kel-Tec is responding and growing rapidly, but chooses to move in a more conservative manner to minimize gambles and risk and ensure its long-term stability. There are really two reasons demand isn’t fully met yet.

One is the obvious fact that scaling up manufacturing capabilities is easier said than done. Kel-Tec has always been popular, but some of the models for which demand wildly outstrips supply are relatively recent releases. It’s pretty clear that this demand isn’t going to fade any time soon, though, so Kel-Tec has scaled up and will continue to do so at an increasing rate.

However, “Kel-Tec does not, and will not borrow money to expand the factory. In other words, we only pay cash. If interest in our firearms suddenly dropped, or a law was passed and our firearms are now illegal, what then?” The company doesn’t want to be on the wrong side of a bank loan, whether that means financial problems or actually losing operational control. I’m sure all of us have feelings on both sides of this decision, with one hand saying “just do it, the market wants your products!” and the other saying, “fiscally conservative, thinking long-term, hedging your risks…okay, I get that and respect it.” Or maybe that’s just me feeling that either choice is understandable, or a little of both. Maybe even a minority equity investment would be a viable third option.

Regardless, their choice will slow expansion to some degree. But Kel-Tec is expanding as rapidly as possible within that constraint.

In 2011, Kel-Tec bought the metal shop next door to its facility. Then it became ISO 9001:2008 certified, which itself required an overhaul of internal processes. This certification cost time and money, while paying off primarily in improved quality control. Recently, renovation in the machine shop was done to make more space for additional machinery (“those new machines are being programmed for the RMR-30”) and offices. Around the same time, Kel-Tec began purchasing land north of its property for larger scale future expansion. Production is currently at maximum capacity, with the machine shop running three shifts, five days a week. Kel-Tec outsources certain processes and parts now more than before, which opens up its machines for more critical functions that it has to control in-house. It carefully selects these partners to ensure quality levels are at least ISO 9001 compliant. One of Kel-Tec’s goals for 2014 is to double KSG production, and some of this will be achieved via outsourcing of certain parts of the gun. 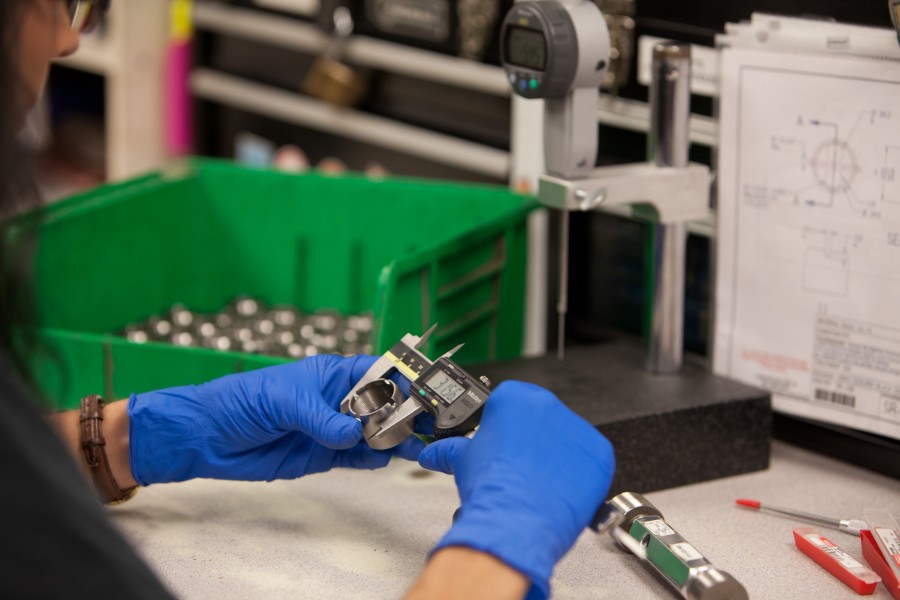 Now that we know some of Kel-Tec’s plans, intentions and strategies for growth and keeping up with demand, one question that remains is what we can actually expect to see in the not-too-distant future. So I asked what Kel-Tec’s forecasted production volume will be in 2016 so we can compare against the previously-mentioned 2013 figure of 117,000 firearms. Drumroll…“Our forecast unit production for 2016 is around 200,000 firearms.” With that out of the way, let’s get to the fun stuff – the rumors! I’m fairly certain that some folks will choose to believe internet scuttlebutt no matter what’s stated in here. Whatever you decide, here’s what Kel-Tec has to say about some of the more popular ones.

I have personally seen and heard – or overheard in my LGS – that some of the market’s frustration with Kel-Tec’s inability to meet demand comes specifically from a belief that Kel-Tec is spending some or much of its time and resources elsewhere. It’s one thing if a small company is trying its hardest and just can’t turn out enough product. That can be frustrating, but it’s understandable. It’s another thing if they’re ignoring their customers and devoting resources and effort in other endeavors. That would actually make people angry at Kel-Tec. There are a couple of rumors along those lines:

The fact is, there’s another company called Keltec. Or there was. Their website, www.keltec.com, now redirects to www.craneae.com, but that’s a relatively recent change. Despite the formerly similar name and the general geographical proximity of one of Crane’s branches to Kel-Tec, these are completely separate entities that have absolutely nothing to do with each. This may be the single most prevalent myth and was understandable enough due to the name confusion. But it is absolutely a myth.

Kel-Tec makes guns as a hobby, and [insert military item here] is its priority.

Another myth. Guns are Kel-Tec’s number one and only priority. The company doesn’t make anything else. No missiles, no grenades, no NASA parts, etc. Well…they make a couple flashlights, but they don’t take much away from firearms production.

Kel-Tec is owned by a woman who got it through a divorce and doesn’t want or care to expand production.

Mr. and Mrs. Kellgren are happily married, and Kel-Tec is expanding production. It’s a mystery as to where this rumor actually came from.

So that’s the long and short of it. Kel-Tec makes some unique and innovative firearms that are in very high demand. It’s not meeting that demand right now. It’s a small company but probably a lot larger than many people think. It absolutely is expanding, both in its plans and in its actions. Kel-Tec does not borrow money to finance its growth. That prevents quickly ramping up capacity but profits are being reinvested into expanding output as quickly as this allows. Rumors of Kel-Tec’s various more important business endeavors or a disinterested ownership are unfounded.

Whether you agree, disagree, or just want to play armchair CEO, that’s the state of the company today.