Caliber wars — gun owners arguing over the relative merits of various calibers of self-defense ammunition — are an ugly, protracted business. This article will do nothing to reduce the hostility and much to increase it. Oh well. It’s hard to talk about personal defense ammo without touching off a skirmish.

A gun owner’s choice of caliber for personal defense is a serious business. After reading the text below, I recommend reading the comments as well. Try out different handguns in different calibers and don’t get “married” to a particular choice. There just may be a better gun/ammo/holster combo out there, somewhere. 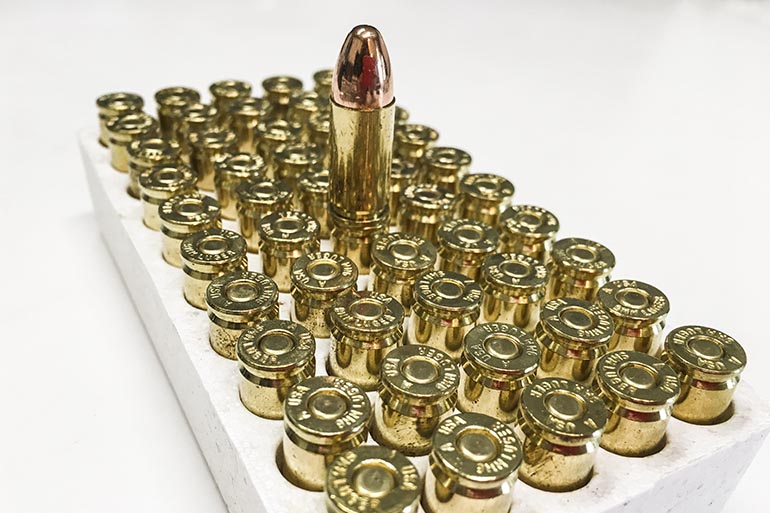 Gun gurus once considered 9mm Luger ammunition to be underpowered, best for shooters who couldn’t or wouldn’t “man-up” and shoot the big boy .45 ACP caliber cartridge. Not anymore.

In terms of “stopping power,” the experts now see it as something of a wash. The smaller and faster 9mm bullet offers more penetration than a .45, while the .45 offers greater expansion — it makes bigger holes — than the 9mm. But in terms of recoil, there’s a significant difference. And improved bullet designs have made 9mm pills much more effective in recent years.

According to gundigest.com, the recoil generated by the G19 generated 4.76 foot-pounds of recoil compared to the G21’s 7.21 ft-lbs. This confirms what experienced shooters will tell you: it’s easier to hit what you’re aiming at with a 9×19 round than a .45. And when it comes to self-defense, shot placement is king.

There are other confusing variables. A smaller 9mm handgun is harder to control than a heavier .45 pistol. But generally speaking, most shooters are more accurate with 9mm than they are with .45 (or .40 caliber ammunition). Add in the lower price of 9mm target ammo and the carry capacity enabled by the round’s smaller size and it’s easy to see why 9mm parabellum rules the self-defense ammo roost. Revolvers remain ideal for new shooters, especially those who don’t or won’t train or hit the range. Which, let’s face it, is the vast majority of American gun buyers. While revolvers come in some astoundingly powerful calibers (e.g. .44 Magnum), those guns generate the same accuracy-robbing recoil described above. And then some.

A wheel gun chambered in softer-shooting .38 Special will get ‘er done. While the .38 Special surrenders speed (about 300 ft./sec.) and energy (about 150 ft.-lbs.) to the 9mm, so what? A modern hollow-point .38 caliber bullet still generates more than merely adequate penetration and very controllable recoil (when shot from anything other than a lightweight snubbie). And it sidesteps the prodigious recoil of .357.

The .38 Special’s only real drawback: capacity. Most revolvers chambered in .38 hold either five (for small guns) or six rounds. That’s not a lot of ammo when you consider the fact that handgun rounds [in general] aren’t particularly lethal, and that many attacks involve multiple assailants. Even so, the .38 Special round makes revolvers viable, if not ideal (is there even such a thing?) self-defense for millions of Americans. Let’s say recoil isn’t an issue. You know how to control it. You could shoot .45, but you want greater capacity and, crucially, the most effective man-stopping commonly available handgun cartridge money can buy. That would be the same round the FBI chose for its agents: 10mm. Right until they didn’t.

The Fibbies bailed on 10mm when they discovered that many of their employees couldn’t shoot the round accurately. It’s worth repeating: the 10mm cartridge is a stout round, serving up roughly 50 percent more recoil than a .45.

One man’s opinion. We know you have your own. Let the comment deluge begin . . .

This article was originally published in 2017.

Leave a Reply to Nate in CA Cancel reply