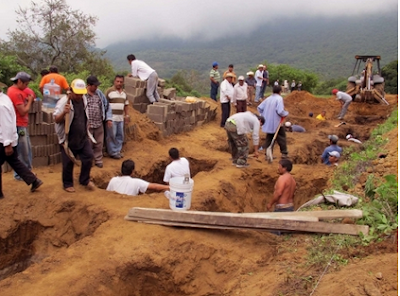 Translation of an article in milenio.com, republished with permission from borderlandbeat.com:

Mexico • 24,102 people: the equivalent of half a football stadium or a medium-sized town is the approximate number of bodies that have gone to the grave at the end of the current administration. And most importantly, it is a highly conservative estimate. It does includes full records of Mexico’s most violent states, such as Guerrero, Michoacan, Sinaloa and Tamaulipas . . .

Throughout the six years of Calderon’s Presidency, thousands of bodies have been buried in obscurity. Several more bodies are added every week: They are migrants, innocents, homeless, homeless families, criminals, and victims of homicide. There are bones and bodily remains apparently unclaimed without owners, which are often buried and stacked in cemeteries across the country from the U.S. border to the Yucatan Peninsula. These faceless corpses are listed in official records only as NN.  No Name. Extensive research from Milenio, based on over 470 records requests filed with state forensic medical services, municipal governments and even with the administration of small local cemeteries, brings a rough sketch that outlines a national atlas of unidentified bodies.

Among the data emerging from the research are two parallel events: 1) some attorneys general do not want to reveal the numbers of unidentified dead under their power. And 2) the number of bodies sent to grave has climbed every year since the beginning of Calderon’s term, on par with the number of executed criminals and victims killed in violence overall. On average, 10 bodies unclaimed name or have been buried daily.

So far, with the figures for 2012 still unfinished and updated only through August 2011, and September, 2011 starts a period in which the remains of more people were placed in public areas, without the benefit of a tombstone which completely ending the identification process: 4,927 corpses never were claimed in that year, during which, coincidentally, it was the year with the highest number of executions linked to organized crime in all of Felipe Calderón’s administration. 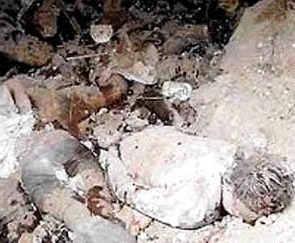 The picture painted by the obtained documents clearly shows that in some cities, like Juarez and Monterrey, and Celaya, many corpses were in state of abandonment that were left to he abilities of the cemetery to process.. Consequently, new ditches in cemeteries have had to be excavated. It is a scenario that is repeated across the Republic, with mass graves or cemeteries running out of space, they have begun to recycle their spaces, removing and discarding the remains of seven years old.

Some cities and states saw the number of unidentified -NNs  (no-names) rapidly multiply. In Nayarit, the figures tripled in three years. In Baja California, they grew by 100 percent. In Torreón, they multiplied 10 times. In the port of Veracruz, there were over a thousand unidentified bodies in 2011. Durango, they went from having eight bodies buried without a name in 2006 jumpedto 438 in 2011 (see graphic above). 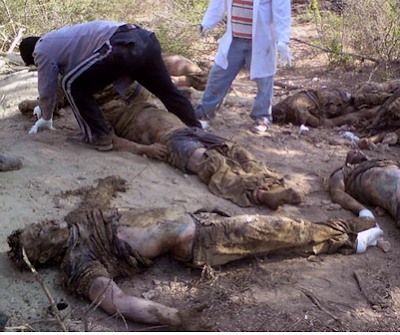 Not only that. The lack of control in the management of unidentified remains in many government entities, but also this  is found in many private entities as well, as evidenced by several of the responses in this process. The report which took more than three months in development and for which it was necessary to create a database from accumulated data with thousands of figures. But these are the ones that have been recovered: the missing may never be computed. Fifty municipalities have lost their files prior to 2008 and 2009 and many have lost records from the location of bodies which makes later further study, investigation and identification unlikely. 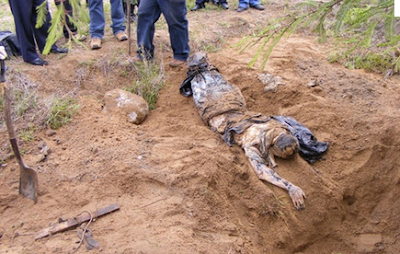 Some states, such as Michoacan, never recognized integrating a state-based data on unidentified bodies and have only just begun that process, although the violence has left thousands killed in that state. The Michoacan Attorney General can not answer how many bodies  the medical examiner received in the administration. “No statistic has the” justified reliance.

“The information on unidentified bodies held by government which have entered the medical examiner is not located together in one place or  well documented in a single organized relationship over the entire state.” But the PGJE-Michoacán said they are already working to correct this deficiency.

Requests for transparency, which will be available for public consultation www.milenio.com not only gives an idea of the general situation of unidentified bodies, but shows different levels of progress in terms of transparency in the country and states. 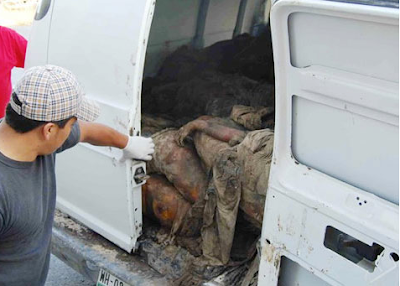 To obtain the data, it was necessary to use emails and state portals (Infomex, Saimex, Guanajuato Unit), without neglecting numerous phone calls and liaison to Social Communication to correct “mistakes” such as file loss, illegible documents and pages offline for weeks.

A total of 479 petitions submitted under pseudonyms, some were answered but some 191-230 all went unanswered. That is, they were completely ignored by the authorities. Another 40 applications were rejected, declared missing or classified as confidential state security.

Many states and municipalities provided the information without delay, as the Federal District, Sonora, Chihuahua and Guanajuato, among others. Their municipalities administrations relations’ prepared detailed statistics, held their forensic medical services and burial administrations open. In general, information was available in 25 of the 31 states and over 210 cities and towns.

It is these responses that arise the well disguised facts detailing how Mexico processes the nameless dead. For example, the bodies in Jalisco after taking a DNA sample are burned. The remaining ashes and a small jar with genetic material remain in niches, waiting for a possible identification. On the other hand, Monterrey is very precise: keeps track of pathological parts, ie limbs, organs retrieved from hospitals or in public. Some cities in Sonora to open their old graves  of people who no longer have family and Pachuca records fetuses – aborted, or abandoned – among all the bodies sent to their graves. 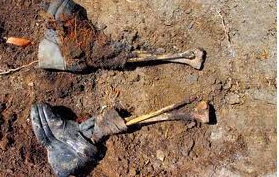 But there is the other side. There are states that did their best not to reveal the number of unidentified bodies processed in forensic services. Despite repeated calls, it was impossible to locate any transparency in the Office of Tamaulipas and that agency spokesman, Ruben Dario, said flatly that “there is no such data anyway because there was a transition of government and we do not know what happened before.  He went further: Tamaulipas  does not collect corpses because “that is the job of the Attorney General.”

Some states shaved their numbers or have calculation mistakes. The Attorney General of Sinaloa reported only a few bodies were  sent in to their company of calculation.   only 54 dead bodies from the mass graves in 2011,  and 227 in the entire administration. But a simple review of the medical service page, where scanned images are stored for unclaimed bodies, puts skepticism and doubts on those numbers. Its database of unidentified, unclaimed deceased located a total of 332 people during the administration.  91 bodies in 2011 alone, double the figure reported via transparency-were left in the hands the coroner. 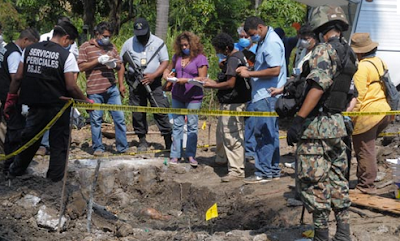 In other states requesting the information, it turned out to be a tangled process and impossible to fulfill. In states like Oaxaca it is asked to bring a printed card facilities its attorney. In Campeche and Chiapas no transparency or even reliable systems: its pages are several months out of service and don’t support questions. Baja California Sur has not bothered to open a service at all yet.

The State of Mexico deserves mention. Data from corpses in mass graves were obtained by their municipalities and their central government, which put various obstacles to prevent the information was disclosed. While most municipalities mexiquenses data revealed their bodies were sent to the pit, the Attorney General made “mistakes”  attaching files to the responses on its website.  the unit promised responsible for its transparency, “It will be resolved quickly,” but a month has passed. 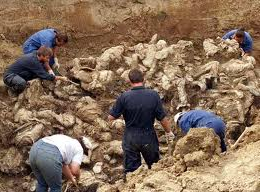 Beyond the technical problems, there are the negatives. That was the case of the Attorney General from the Offices of Veracruz and Aguascalientes as well as the prosecution office in Yucatán. The first two entities classified data as confidential, all information relating to the number of bodies received and processed by their respective forensic services (although municipalities delivered their data promptly without any problem). The Yucatan, for instance declared itself incompetent to answer any questions because, they said, that is not within its powers to have the bodies.

With respect to Veracruz, the argument went thus far: they literally said that the permanence of government, its institutions and to the territorial integrity of the state “would be at risk” to be known such data, in addition it would “invade privacy” of the unknown corpses. 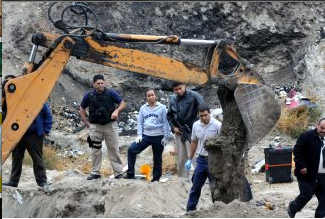 In the end, the LAVI ruled in favor of this newspaper to consider their arguments and held that the argument of the Attorney Veracruz “lacked legal validity.” So far, the PGJE has not complied with the mandate to disclose its files of unidentified bodies. 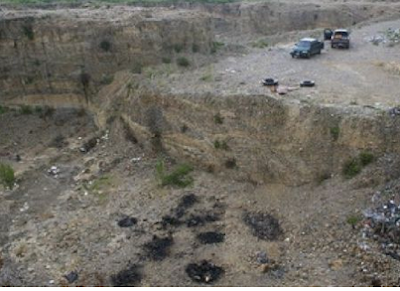 Despite that, some thirty Veracruz municipalities themselves provided the information requested. And it was this that allowed the construction of a map, incomplete but functional, on the situation of unidentified bodies and unclaimed in Veracruz. From this data it was revealed that the state has resorted to more graves. In total, six years so far and still waiting for the state figures that  the attorney could generate, municipal administrations have documented burial of 5,245 people. The highest figure in the entire country.

24,102 people is the most concrete figure has been added under this methodology. And yet, it is a conservative figure. Beyond Monterrey, failed to ask the municipal level in violent entities such as Nuevo Leon-Guerrero much less, and the requests that were made to the municipalities of Sinaloa Infomex system disappeared  by a “computer error” that two months later, has not been corrected by the State Commission on Access to Public Information. There were lost data from Culiacán, Badiraguato, Mazatlan and Los Mochis that, most likely, it would have increased the number of NNs (no names). 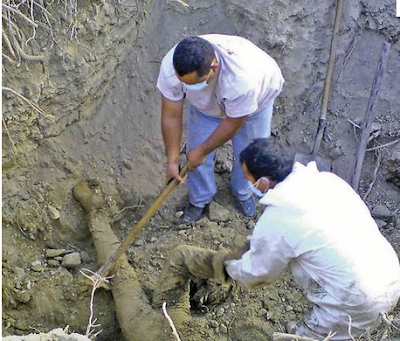