H&K makes a pretty nice grenade launcher for the military. It swings out to the side instead of forward (like the M203), which allows it to take the slightly longer medium velocity grenades in addition to the low velocity ones and just plain looks cooler. But the most interesting part of this weapon wasn’t the grenade launcher, it was the little box of magic attached to the side.

A grenade has a trajectory more akin to a rainbow than bullet. It has a very high arc and goes very slowly, and as a result getting the angle just right on the gun to make the round land where you want usually involves tons of guesswork and a little luck. The standard method of hitting your target is “walking” the round in after a few shots, which wastes ammo and possibly endangers other people’s lives. Not fun.

Rheinmetall is a German company that specializes in highly engineered pieces of equipment designed to kill people. And they do it REALLY well. They have designed a bolt-on addition for the grenade launcher that attaches to the rail on your rifle and lets you put rounds exactly on target every single time. And the best part was that H&K had one on their rifle at NDIA’s live fire demonstration and they actually let me use it!

So here’s what’s going on in this video, and why this is making me so happy in a very nerdy way: 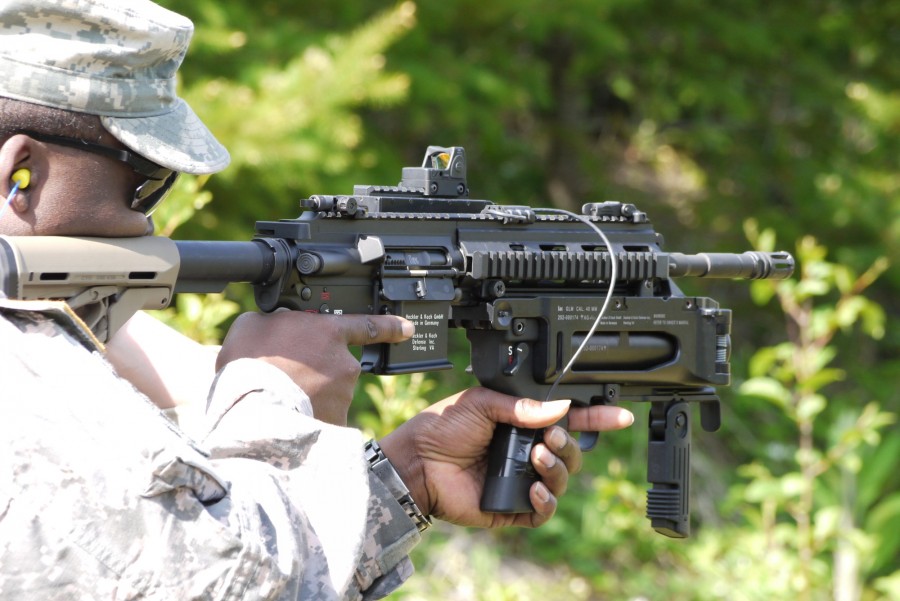 First, you line up your target with the red dot sight on the top of the boxy thing. Then you hit the “range” button, which will fire a laser out of the mechanism and precisely measure the distance to your indicated target. In meters, that is (FYI).

Then, and this is the awesome part, the whole thing tilts. So now, what you have is a red dot sight that is positioned such that when you put the dot back on the target, the tube will be tilted precisely at the right angle to put that round on the target. Well, almost, One more step to go.

You see that LCD screen on the box? You also see the two lines displayed on it, one above the other? You’re going to love this: those two lines give you spin drift compensation.

As the round flies downrange, it spins to stabilize in flight. That spinning also tends to throw it off to one side or the other slightly. The longer the projectile is in the air, the further it will drift due to the spinning. And since the grenade is in the air for a good 4 seconds it can spin quite a long ways off course.

With those two lines you cant the weapon until they line up, and you have completely eliminated the spin drift. The round will actually walk itself back on target as it flies downrange.

This is just the prototype. Rheinmetall has a new version coming out that only tilts the red dot sight instead of the whole box and is a lot slimmer. The reason tilting the whole box is a problem is when it comes to programming airburst rounds. The computer programs the round to detonate in the air by firing an infrared beam that is picked up by the rear end of the round as it exits the barrel, so that requires the programming unit to be in line with the barrel. The current “tilt the whole thing” design doesn’t keep anything in line with the barrel.

There is a drawback to this awesome piece of technology: its heavy. Like, really heavy. If I was given the choice between carrying three times the ammo so I could walk the rounds in or this thing I’d carry the extra ammo. The unit itself doesn’t weigh all that much, but on top of the grenade launcher and because its at the far end of the gun it makes the gun really hard to hold up. Then again, the only heavy lifting I do these days is with a Mountain Dew bottle. Anyway, I prefer my firearms to be as lightweight as possible, and this thing definitely doesn’t help.

Like everything, its a trade-off. Do you want to be super accurate, or do you want to be lightweight? Depending on the mission that balance might change, and this unit may or may not be useful. But for me, some random gun nerd on the internet, this thing is friggin’ amazing.