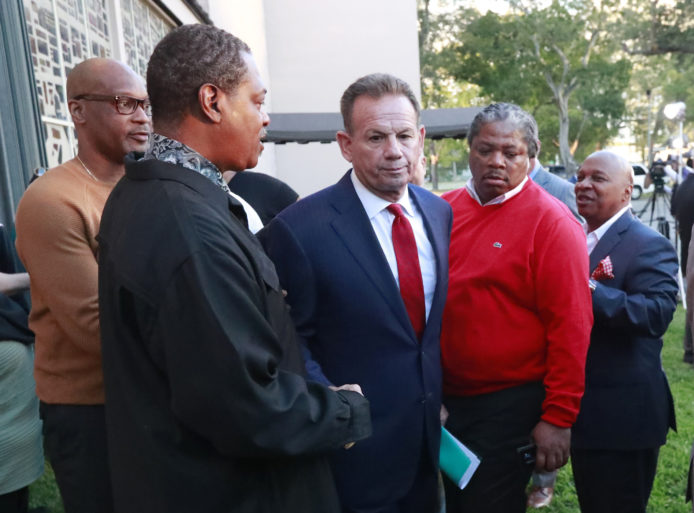 The 2018 massacre that pushed former sheriff and current challenger Scott Israel out of office left 14 students and three adults dead at Marjory Stoneman Douglas High School, a top-tier school in the wealthy Fort Lauderdale suburb of Parkland. A former student is awaiting trial.

The campaign of Sheriff Gregory Tony, appointed by Gov. Ron DeSantis when he fired Israel in 2019, is haunted by his 1993 killing of an 18-year-old neighbor in a poverty-stricken section of Philadelphia when he was 14. A judge found he was defending himself and his brother, but he has been hammered for not disclosing the shooting to DeSantis or when applying for police jobs. Tony and Israel are the top contenders in Tuesday’s primary, which also has four lesser-known, lesser-financed candidates. Tony and his political action committee have raised about $1.5 million, while Israel has gotten about $600,000, according to election records.

The Democratic winner will be a strong favorite in the November general election as that party has a 50% to 21% advantage over the Republicans in registration. Tony and Israel are former Republicans. The sheriff runs a 6,000-employee operation with a half-billion dollar budget.

Accusations of racism entered the contest recently when a Black campaign staff member for Israel called Tony, who is also Black, a racial slur referencing a slave who enthusiastically serves his white masters. Israel, who is white, fired the staffer.

Israel, 64, eked out a win in 2012 and won handily 2016, but days after his second term began in January 2017 a gunman killed five people at Fort Lauderdale’s airport. Broward deputies quickly captured the killer, but Israel received criticism in an investigator’s report for failing to take charge at the chaotic scene that had passengers cowering in fear for hours amid false reports of a second gunman.

Israel escaped that storm, but couldn’t get past Stoneman Douglas. In the days immediately after the Feb. 14, 2018, shooting he portrayed his deputies as heroes and criticized the National Rifle Association during a nationally televised town hall as blocking needed gun regulation, a position he had long held. But school security video soon showed his deputies failed to enter the building to confront the shooter. Israel refused blame for their actions and said he had shown “amazing leadership.”

It was then learned that before the shooting Israel had changed department policy from requiring deputies to engage active shooters to “may.” It is a policy many departments have so officers aren’t compelled to undertake suicide missions, but the die was cast.

The slain students’ parents and conservative groups got promises from DeSantis that if he were elected he would fire Israel, which he did days after taking office in January 2019.

Israel called the move a “power grab” and insisted, “There was no wrongdoing on my part. I served the county honorably.” DeSantis’ decision was upheld by the Republican-led state Senate, even though its investigator found DeSantis’ grounds didn’t meet Florida law. DeSantis says he won’t again fire Israel if he regains office.

DeSantis surprised everyone by picking as Israel’s replacement Tony, a political unknown who lived outside the county. A former sergeant in the suburban Coral Springs Police Department, Tony had left the force in 2016 to run his consulting company, which trains officers to confront active shooters. Tony, the county’s first black sheriff, had been recommended by Andrew Pollack, whose daughter, Meadow, died at Stoneman Douglas. Pollack had become one of Israel’s most outspoken critics and a DeSantis ally.

But Tony, 41, quickly made enemies with the primary deputies’ union, which said he fired and disciplined deputies accused of misconduct without due process and wouldn’t communicate.

Deputies also accused him of being slow to provide protective gear when the coronavirus pandemic erupted. That resulted in an angry confrontation between him and union leaders after a deputy died of the disease. He suspended the union president from duty; the union, in turn, voted no confidence in Tony.

Then in May an investigative website, the Florida Bulldog, uncovered Tony’s Philadelphia shooting. Tony never disclosed it on law enforcement job applications, checking “no” when asked if he had ever been arrested. He also didn’t tell DeSantis or state investigators who vetted him for sheriff.

Tony said he doesn’t believe he was arrested, but 1993 newspaper accounts indicate he was held for several days. His former chief at Coral Springs told reporters he never would have hired Tony if he had known his history.

Tony has said he is being targeted by the unions and entrenched special interests. He has said he is proud of overcoming a life that began in an impoverished, violent neighborhood to become the county’s top law enforcement job. He also still has the support of the group representing the Stoneman Douglas victims.