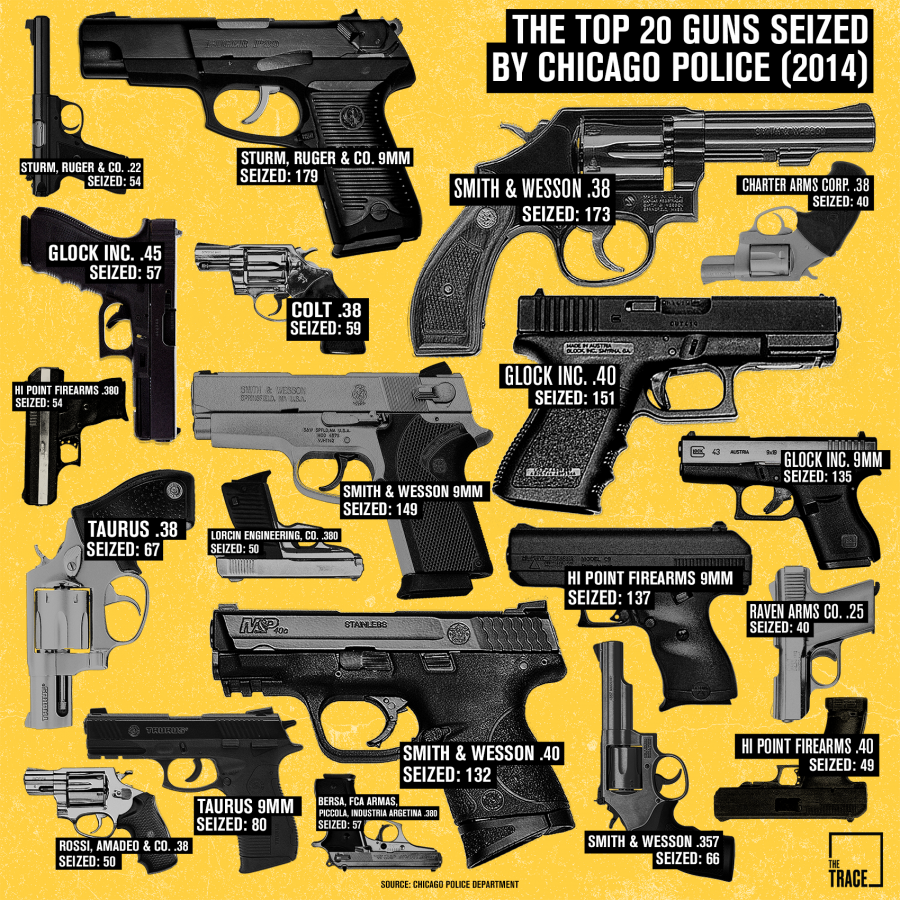 I’ve already fisked thetrace.org‘s analysis of the source of Chicago’s “crime guns.” Suffice it to say, it’s all about the free market – even when it’s a black market. The idea that creating more onerous background checks in Illinois’ surrounding states would “choke-off” Chicago’s criminals from the tools of their trade is prima facie absurd. Anyway, we thank The Trace for putting together the above info-graphic. Here’s some Bloombergian analysis of the montage . . .

A few patterns emerge. The city’s criminals, for instance, prefer semiautomatic pistols to revolvers and generally seek out cheap junk guns. What’s also notable is the type of gun that doesn’t appear among the top models seized. In 2014, Chicago police recovered only three assault weapons associated with criminal incidents. “Often there’s a misimpression about the importance of assault guns and assault weapons, and it’s important to point out how rare that is,” says Phillip Cook, an economist at Duke University who studies underground gun markets. “The guns being used in Chicago for crime and murder are by and large very ordinary pistols.”

Cheap junk guns? While The Trace doesn’t reveal the models of the firearms charted above, IF we were to call any of the guns “cheap” (rather than inexpensive) it would be the firearms manufactured by Hi-Point, Lorcin and Raven. Combined, they account for just 193 out of the 1799 guns in the Chicago PD’s top 20 “crime guns.” (The grand total is 6,521.)

So “cheap junk guns” make up around ten percent of the total. Makes sense to me. Gang banging is a professional occupation. Professionals select their tools carefully – or as carefully as they can given their education level. As this survey shows, very few are stupid enough to try to consider an “assault gun” (i.e. a rifle) the appropriate weapon for committing a[nother] felony.

Nearly two decades after its rocky safety initiative, Smith & Wesson is Chicago’s leading producer of crime guns. The company holds four spots among the 20 guns most frequently recovered by police — more than any other brand — and is the most popular manufacturer overall, with 624 total guns seized in 2014. It’s worth pointing out that Smith & Wesson is the country’s largest firearm manufacturer, which may account for the prevalence of its products among the city’s crime guns.

The weapons of choice for gangs today are 9MM semiautomatic handguns, followed by .40 caliber and .45 caliber semiautomatics, says Thomas Ahern, an ATF senior agent based in Chicago. It makes sense then that those calibers account for about half of the crime guns recovered by police.

Until the 1980s, .38-caliber revolvers were the most popular crime guns, according to Cook. These revolvers were more reliable and cheaper than semiautomatic pistols of the era. But that changed as manufacturers began producing semiautomatics that were just as efficient and affordable as revolvers. What makes semiautomatics particularly appealing to gang members is that they generally have a higher capacity than revolvers, meaning they can fire more shots before it’s necessary to reload.

I find it interesting that 9mm, .40 and .45 make up such a small percentage of the “crime guns.” The Lorcin is a small .380 caliber pistol. The Raven’s a diminutive .25 caliber handgun. Both are fine for intimidation, which is probably just as important as capacity or accuracy in the gang bangers’ world. Both conceal easily. But neither is an ideal choice for anything other than bad breath distances.

[Duke University economist Philip] Cook’s research has shown that crime guns purchased by gang members tend to be an average of 12.6 years old.

I reckon .38 caliber revolvers are still a go-to gat thanks to their longevity (as above), simplicity and style. As I’ve said before, revolvers look more like a gun than semis do; they’re better for intimidation. Also, revolvers require less maintenance than semis. Which is another reason why gang bangers and GLOCKs –guns with a well-deserved rep for functioning without cleaning and lubrication — are a logical fit.

“A lot of gang members and criminals are settling for what they can get their hands on and afford,” says Duke’s Phillip Cook. But just because gang members can’t afford a Glock, that doesn’t mean they don’t want one. “Glock would probably be the weapon of choice for most of the gangs,” says the ATF’s Thomas Ahern. “They view Glocks as top of the line.”

Thank you Hollywood and rap. And again, thanks to The Trace for giving us insight into the world of Chicago “crime guns.” Here’s hoping they put as much work into researching defensive gun uses by law-abiding citizens. And then I woke up.