The Browning BAR (No, The Other One): The Hunting Rifle and Its History This BAR was born out of FN’s “Carbine 66” commercial project. Design, testing, and fine tuning was done in 1966 and completed in 1967. A major player in this rifle’s development is Bruce W. Browning, the gun messiah’s grandson.

The BAR is a semi-automatic, short-stroke gas piston driven, full bore cartridge hunting rifle with a rotating multi-lug bolt system that uses detachable box magazines and is chambered in a variety of cartridges ranging from the .243 Winchester to the .300 Win Mag and larger.

The BAR has gone through a number of development and production changes over the years. The first model introduced in 1968 had a distinctive scalloped receiver and a complex, but reliable trigger group assembly that required the buttstock to be taken off the receiver to remove the trigger group. The magazine was attached to a hinged floor plate. In 1976, the production process was slightly simplified and the Mk II was born. It was produced from 1976 to 1992. Some of the changes were in the rear stock tang and a bolt catch/release lever was added. Additionally, the trigger assembly group was simplified and now held in place with cross pins. But the classic BAR quality was still there, as was the distinctive scalloped receiver that mimicked the Browning Auto-5 shotgun. The Mk II is the second-most prolific BAR sub-type out there. The hinged magazine is still in place, but the magazine body itself can be removed. The current production, known as the MkIII, launched in 1993 and is still made to this day.

The Mk III is a somewhat radical departure from the classic BAR. Gone is the classic scalloped receiver. The gas system was redesigned for increased reliability. Long and short actions were made instead of using one universal long action receiver, and a few variations started to come out of the woodwork.

There is the Stalker, the LongTrac, the BOSS, among others. This included relative oddballs like the Browning Pump Rifle and the Acera, a straight-pull version of the BAR.

These models were developed in the 1990s as a result of the Clinton assault weapon ban and various gun control laws passed in Europe. FN feared semi-autos could be outright banned in the US and also planned to market these in Europe and countries where the ownership of semi-autos was verboten. The Acera and BPR are one the rarest of BAR variations that are highly sought-after by collectors.

The BAR was also sold under FN’s other brand, like Winchester as the Winchester SXR (released in 2006). The Winchester Super X RIfle was a slight change from the traditional BAR Mk III.

It had a fully removable box magazine. 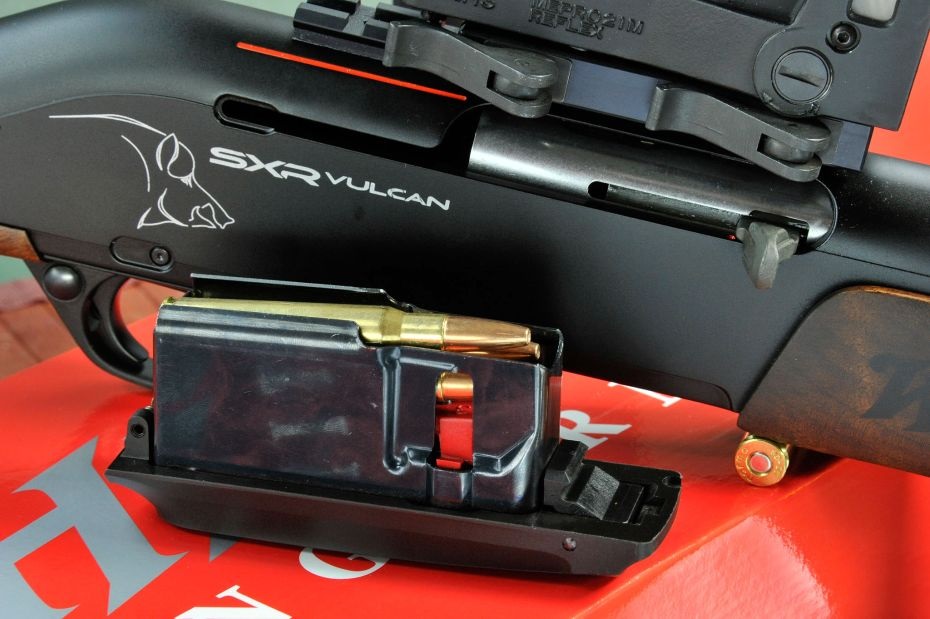 There was some interesting history leading to the development of the BAR under the FN label.

In the 1970s, FN considered producing a special version of the BAR for a law enforcement. It was to be chambered in .308 Winchester, and was intended to use unmodified FN FAL magazines, but the project never really went forward, and it was never produced.

Then, in 1988, a FN engineer by the name of Joseph Rousseau took a trip to Browning’s Utah offices, fell in love with the area, and moved his family to Utah and became Vice President of Research and Development for the Browning side of the company. Rousseau was the man behind the Mk II BAR and he dusted off the idea of a truly detachable box magazine for the rifle.

Higher ups at FN Herstal, however, were reluctant. It wasn’t until 2006 with the Winchester SXR that Mr. Rousseau’s design for the MkII magazine came about.

In the early 2000s, FN saw the market shift in police tactics in regards to sniping. FN had a fantastic bolt-action platform in the Winchester Model 70, but SWAT teams across the country wanted a semi-auto. So, FN’s American production facility in Columbia, South Carolina, resurrected the law enforcement project to compete with the growing popularity of the Springfield Armory M1A and the Knight’s Armament SR-25.

The Fabrique Nationale Automatic Rifle or FNAR was born and released in 2008.

This rifle was developed at the same time as the SCAR-17. The trickiest part was developing a reliable magazine, so the design team looked at what their cousins in Belgium were doing. Both rifles share a similar magazine design with roots from the fabled right arm of the free world, the FN FAL. With that problem squared away, the designers then looked at making the FNAR more attractive to the police market. Gone is the fancy bluing, replaced with a parkerized finish. The barrel was a beefed up twenty-inch heavy profile version that was fluted for better heat dissipation.

The target match crown was recessed to keep accuracy above par when thrown around in the back of a patrol car. The stock was made of polymer instead of high-grade wood. Lastly, a full receiver-length MIL-STD-1913 Picatinny rail was mounted on top of the receiver to give the user more options in scopes than what was traditionally done with the BAR. Both the Winchester and Browning-labeled guns were, for the most part, FNARs. The difference was that they didn’t have the side accessory rails, and the receiver-length Picatinny rail was made into a more traditional two-piece mounting point for optics. Also, the barrel was non-fluted, and the only finish available was camouflage.

In Europe, the FNAR was released as the Browning BAR Match. As time marched on, though, sales lagged in the law enforcement market due to the proliferation of AR platform rifles. FN then teamed up with McMillan Stocks to develop the FNAR Match. According to McMillan, they made ten prototype stocks for ten FNARs with modified receivers. The normal FNAR rear stock attachment was modified to fit the McMillan stock. The bolt release was also modified.

The intent of the project was both to build a California-legal gun and to improve accuracy. Apparently, the ten guns were tested and produced results from .75 to 1 MOA, which was already the standard with the FNAR. FN didn’t consider this a worthwhile endeavor, since there was no increase in accuracy, and the FNAR had to be modified in order to fit in the McMillan stocks. The project was ultimately scrapped.

While the FNAR didn’t succeed see much success as a law enforcement sniper rifle, it did see some interesting duty. Specifically in anti-piracy operations. Still, the traditional BAR Mk III kept chugging along with a devoted following. But fans still wanted a reliable and rugged detachable box magazine. FN listened and answered their call in 2016.

First, FN spun the FNAR into a high-end production gun, this time with an adjustable wood stock.

Sold as the FNAR Competition, it was marketed as a three-gun match rifle, similar to the SLP Competition shotgun.

In 2017, however, FN pulled the standard FNAR and SX-AR from the market due to poor sales. The FNAR wasn’t the ‘must have’ law enforcement gun, and the Winchester model wasn’t particularly popular because some states had banned pistol gripped semi-autos.

However, FN wasn’t done just yet. In 2017, they released an updated gun under the Browning label as the BAR Mk 3 Detachable Box Magazine. The BAR Mk 3 DBM went a step further in simplification. Gone is the fancy wood stock, small front sight rail, and full-length receiver rail. This model is a basic stalker model with detachable box mags. Also, the fluted barrel came back.

The BAR has come full circle. Starting out as a classic hunting rifle, it became a police marksman’s rifle, then a competition rifle, and finally, today, a modern take on the classic hunting rifle that is 50-state legal. The magazines are the interchangeable. So, if you have a Winchester SX-AR, a FNAR, or a BAR Mk 3 DBM, you use the same 5rd, 10rd, or 20rd magazines. All rifles are chambered in .308 Winchester and all use the same stocks.

Despite the ups and downs, the BAR, in one form or another, has been a perennial favorite. Even after semi-autos from Remington, Winchester (prior to the FN buyout), HK, and others bit the dust, the BAR continues on.

I believe that had FN introduced the FNAR back in the 1970s or 1980s, it would have sold very well to law enforcement. However, due to its delays, the AR rifles (specifically the variation designed by Knight’s Armament) became the de facto police semi-auto sniper rifle.

Outside of FN, the BAR has also been developed for SOCOM. Yes, you read that right. SOCOM, the guys who go deep into enemy-held territory and do bad things to bad people in the dark of night, looked at the BAR.

Arms Tech Ltd. was contracted by SOCOM in the mid 1990s to take the BAR Mk II in .300 Win Mag and make it into a long distance semi-auto sniper platform. They came up with the Super Match Interdiction Rifle. The exact purpose for which SOCOM wanted the SMIR is unknown. We don’t even know where (or if) they were used, however, it was made, and you can actually order one today.

I recently purchased a NIB 2010 production FNAR, and will be doing a comparison  to see who made the better hunting rifle. Is it the Belgians at FN, or their neighbors, the Germans at HK? Stay tuned. Because the FNAR and HK SLB 2000 will go head to head very soon. Photography by A. Valdes

The Browning BAR (No, The Other One): The Hunting Rifle and Its History