Some styles never fade; the tuxedo, the little black dress or the martini. They’re go-to icons of classic style and functionality. Along the same lines is the full-sized .38 revolver. Six rounds of widely-available ammo in a package that rarely fails that delivers only a little more recoil than a .22 auto. It’s the ideal bedside gun for those unfamiliar with firearms who might lack the coordination, strength or inclination to wield a shotgun indoors . . . 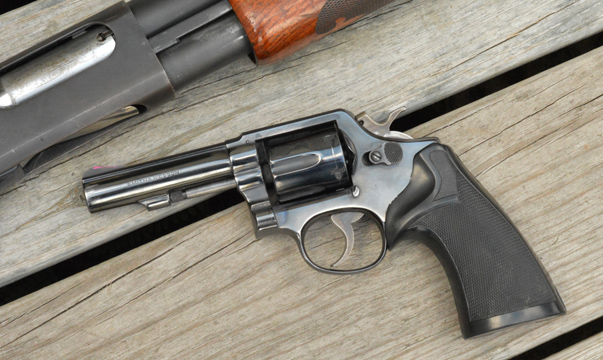 Got ammo? More loads exist for the .38 special cartridge than just about any other round. As long as the selected load has enough power to motivate the bullet out of the barrel, the gun will keep on shooting. And there’s no need to use expensive hollow-points when you fire a heavy projectile that imparts all of it’s energy into whatever recipient is unlucky enough to be on the receiving end. Personally, my favorite load for a full-sized .38 is the 158 grain jacketed wad-cutter. Will this cartridge launch your would-be assailant across the room, leaving a Buick-sized crater while blowing out every window in your house? Well, no, but neither will a 12-gauge slug. Relying on any hand-held heater to stop an assailant cold in their tracks is foolish. Utilizing the heaviest cartridge that the shooter can comfortably manage is a much more viable option when it comes to stopping power. So the 10-6’s combination of a comfortable grip, smooth trigger, low recoil, and the use of a heavy semi-wadcutter .38 means putting rounds on target in a hurry is a breeze.

The model 10-6 is a double action revolver, meaning the trigger both cocks the hammer and releases it. That doesn’t mean you can’t cock it manually, but doing so will slow down how rapidly you can let lead fly. Since you’ll probably be primarily using this gun in double action – unless you’re doing bullseye shooting – you’ll want to make sure the stocks you choose fit your hand well. Thankfully S&W revolvers have more grip options than a kung-fu master.

Personally, I went with a set of Pachmayr grips. I found the Hogue’s finger grooves detrimental when firing double action, since they force you to put your fingers in the indentations. Keep in mind hand size if you’re thinking of buying a particular grip for a loved one’s home defense gun. I have small hands that are a size larger than my wife’s. It also helps to think of revolver stocks like running shoes. If you’re just going to stroll around the block in them every other week, simply adequate will probably do and shouldn’t bother you much. But if you’re training for a marathon – or shooting regularly, maybe even in competition –  you’ll want something more specialized. No one ever complained about their feet being too comfortable and no one ever said a gun was too easy to shoot. Well, expect for people trying to ban or confiscate them. Smith’s 10-6 is an easy-shooting, inexpensive (at pawn shops), reliable blaster. So why doesn’t everyone use one? Mostly because the design doesn’t hold a ton of ammo or facilitate rapid reloading. You can accelerate reloading by using a speed loader, but unless you’re Jerry Miculek you won’t get 18 rounds through any .38 revolver as fast as you could through a Glock 17. That said, most wonder-nines don’t fit small hands as well as a slim-grip revolver would. All those extra rounds don’t mean a thing if you can’t hit what you’re aiming at. Your typical 10-6 is also infinitely more reliable than just about any semi-automatic since there are very few moving parts and the parts that do move aren’t dependent on load (or wrist) strength. Still, you should run a box of your favorite defensive rounds through the gun before carrying it to familiarize yourself with recoil and zeroing. But if you buy any mainstream factory loaded defensive round, it will function beautifully in your 10-6. When it comes to maintaining your Smith revolver, less is more. Taking the side plate off of a S&W revolver can be a permanent affair if you’re ham-handed. For cleaning, remove the screw located above the trigger on the right side just below the cylinder. That releases the yoke (or crane as Colt, Ruger, & Taurus call it) and allows it to be pulled forward and free from the frame, along with the cylinder.

Vigorously clean the forcing cone; the part of the barrel that almost touches the cylinder. Clean each chamber in the cylinder as you would any carbon-coated barrel. Lightly grease the bearing surfaces, such as where the yoke and cylinder meet and don’t forget the cylinder’s axis. I tend to use lithium grease or the dry ones that I’ve seen marketed under the S&W name as they tend to stay where I put them. YMMV. 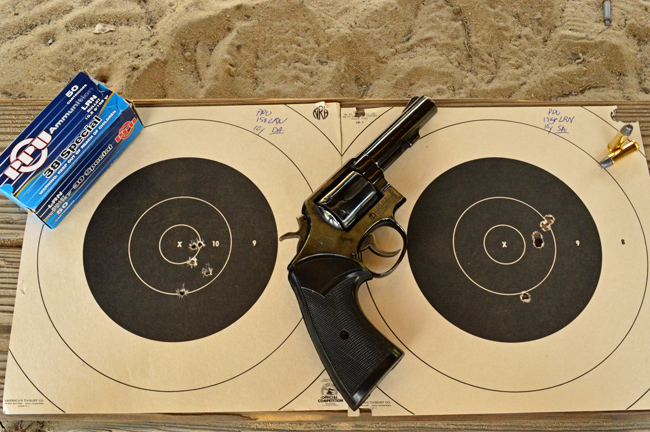 To test my 10-6’s accuracy, I fired the gun in both single and double action. Neither were done from a rest because I’ve never heard of a courteous criminal letting you find an ideal rest for your pistol to line up the perfect shot. Long story short, it’s much better than minute of bad guy and won’t let you down in a pinch.

Style * * * *
S&W are renowned for their revolvers. The Model 10 with its numerous variations is always a beauty to behold, but Colt’s Serpentines made in the same era puts the Smith to shame.

Ergonomics  * * * *
The S&W Model 10-6 has great ergonomics for 50% of people out of the box. The other 50%, like my wife, find shooting the gun in double action comfortable only with aftermarket grips.

Customize This * * *
While a plethora of grips and sights exist for the Model 10, only the grips can be installed without a gunsmith. That said, the Model 10 has been around for ages so finding leather and speed loaders for this gun will be simple.

Overall * * * *
The Model 10-6, like all full-sized revolvers, is a nostalgic piece that represents a simpler time. But that doesn’t make it any less deadly today. Just keep a spare speedloader or two around.

Special thanks to Salute Targets for their steel plate reactive targets and to Federal Premium Ammunition for their generous ammunition contribution.