The silencer, range time, and metering equipment for this review were provided by Capitol Armory based in Cedar Park, Texas

Many years ago, in a land far away, the team at SilencerCo was like a large oak tree. Big, beautiful, and capable of nearly blotting out the sun with its size and scope. Over the years, various leaves have fallen from that original tree, taking root at other companies in the industry. In the case of Mike Pappas, co-founder of SilencerCo, the tree that sprung up was Dead Air Armament. Other SilencerCO alums who have taken root at Dead Air include designer Todd Magee and super salesman Gary Hughes. Like most silencer companies bringing products to the market for the first time, Dead Air’s first contribution to the market was a family of .30 caliber silencers called the Sandman… 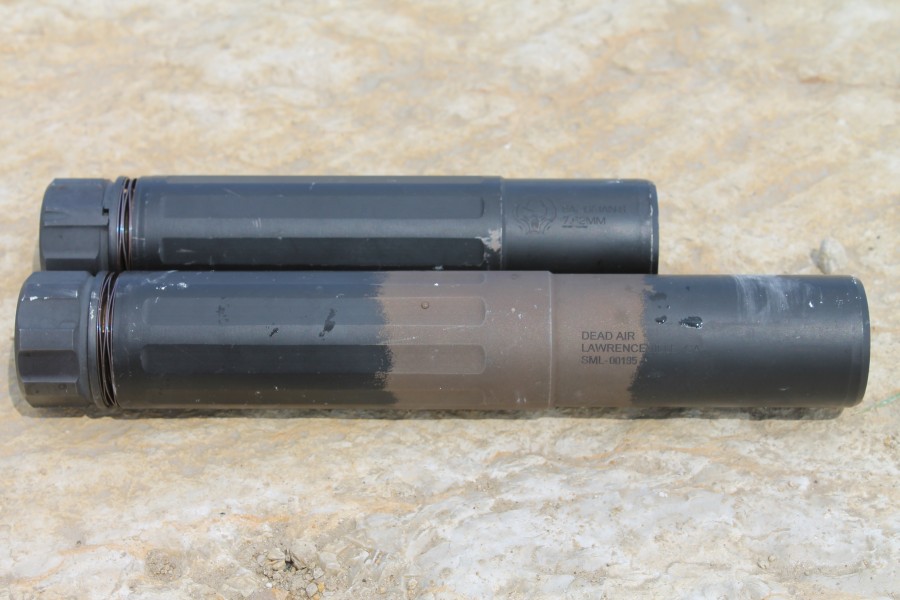 The Sandman series comes in three versions. The first is a direct thread model constructed of titanium while the second and third are quick detach short and long models. The Sandman S is the short model tested here. As you can likely see from the photos, the model I used for testing had some mileage on it, something that Torrey, Capitol Armory’s owner, was all too pleased to discuss.

Torrey spends a lot of time shooting and abusing silencers, and has found the Sandman series of silencers to be robust. As TTAG doesn’t have its own FFL, we don’t get to test silencers for long term durability unless we go through the arduous process of buying them outright, so second hand information is valuable. At the time of our test, Torrey had just returned from a machine gun shoot where he’d put the Dead Air silencers, along with quite a few others, through their paces. The L model (review forthcoming), shows the telltale color changes to indicate that it had been run hard, and Torrey indicated that the S model hadn’t been babied either. Given their all-steel construction, the Sandman series is built like a tank. The baffles on both the Sandman S and L are constructed completely of Stellite while the outer tube is made of  precipitation hardened Stainless Steel. Picking up the Sandman S, it’s apparent that this is no flyweight silencer.

Dead Air claims the can alone is weighs 18.5 oz, but my scale pegged it at 18.6 oz. The muzzle devices add a few ounces as well, so call the whole package ~20 oz. Another pound and then some on the muzzle end does change the balance and feel of a rifle. Even with my eyes closed, I could tell if the Bergara we used for testing had a Sandman stuck to the end or not. Getting the Sandman on and off is a breeze thanks to the ratcheting locking collar and keymount system. Simply slide the Sandman over the brake (it only goes one way), and tighten it down until it stops ratcheting. Reverse the procedure to loosen the Sandman. Once it stops turning, pull it off the end. This is a sweet setup that ensures that the Sandman only ever goes on one way, and locks up tight against a taper mount brake. Any silencer company worth their salt is worried about point of impact shift, and a taper mount is a sure sign they’ve done their homework as the taper ensures a consistent lockup every single time.

Another added benefit of Dead Air’s keymount break is that you can run this silencer under a hand guard for something like a short barreled 300 BLK AR. There’s no latch mechanism to get at, so you’re free to run a full length rail over the silencer. All the benefits of a taper mount thread over muzzle brake design with the added benefit of a locking collar. What’s not to love?

Given the weight of the Sandman S and the fact that it is designed as a QD silencer, I was very interested in the change it would make to the point of impact vs. a bare muzzle. To test this variable, I affixed the Sandman to Bergara’s LRP Elite in 6.5 Creedmoor. I shot a five round group without the silencer, torqued the silencer as tight as I could, shot another five round group, and then removed and reinstalled it with a less superhuman level of strength, and shot one more five shot group. The targets are below. 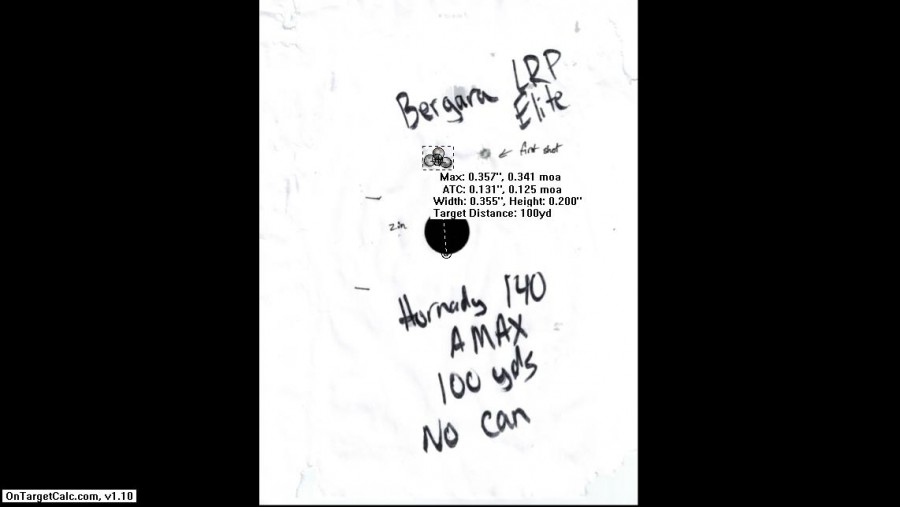 As you can see, I yanked one right off the side on my first shot of the day, making it a 1.12 MOA five shot group or a .36 MOA four shot group. I elected to kick out the called flier for the purposes of testing. I had every intention of shooting a better target without the silencer, but Texas’ famously fickle spring weather popped up, and our range day was cut short by rain. Unfortunately, I had to work with what I had. Below are the group sizes and their location from the point of aim (the bottom of the 1 inch circle).

There are three things I’m very interested in when it comes to screwing a silencer to the end of a rifle. The first is the effect on the accuracy of the rifle. There’s no point in spending big money on a precision rifle if screwing a can to the end makes it shoot like a cheap Wally World special. The second thing I look for is change in the point of impact from a bare muzzle. There’s no getting around the fact that adding a weight to the end of the barrel will cause the barrel to “bow” ever so slightly causing the shots to hit low. This is magnified by usage on thinner, “whippier” barrels. The last thing I look for, and one that is tied to the second very closely is to see if any change in point of impact is repeatable with removal and installation. Given the cost and paperwork associated with acquiring a silencer, it will likely be doing double (or triple) duty on multiple rifles. Point of impact shift doesn’t have to be bad if you can reliably be compensated for it.

Based on my testing at 100 yards, it was apparent that the first thing the Sandman did was move the point of impact down by 1.94 MOA. I had first noticed this when I checked zero on the Bergara LRP for my review. Butted up against the zero stop on the scope, the gun shot two inches high at 100 yards. I called my point of contact and he told me that the rifle rarely spends time without a Sandman S on the business end. Actually fitting one to the muzzle confirmed that fact. Point of impact shift testing varies from gun to gun, so don’t expect that these results would hold up on a twenty inch heavy profile barrel or a twenty four inch thin profiled barrel.

In the case of the Sandman S, I found that the difference between the center of Group 1 and Group 2 was ~.1 MOA at 100 yards. Given that I was shooting groups that varied by that much (.60 vs .69), I’m  inclined to believe that the limited amount of shift I saw was nothing more than background noise. The final verdict is that it does have some shift which can be attributed to its chunky nature, but it is repeatable. Given the design of the muzzle device, I’m not surprised. For sound testing, Torrey and I used a yet to be reviewed FN SPR in .308 WIN fitted with a twenty four inch barrel. We shot Federal Gold Medal 168 gr. to ensure consistency.  The testing was done with Capitol Armory’s sound metering gear used for their series of review videos.

I mentioned that it was raining during a portion of our test, so it should come as no surprise that when I recorded our environmental data for the test using a Kestrel Sportsman, the humidity was pegged at 100%. Barometric pressure was 28.39 in Hg, and the temperature was 69.2 degrees. Unsuppressed, the 24″ FN turned in a reading of 172.8 dB. With the S model affixed to the end, that number was brought down to 143 dB on average. The loudest shot was the first one at 144.7 and the quietest was at 140.9 dB. That is a nearly 30 dB reduction, and while we can never recommend firing a rifle without hearing protection, I did find it to be relatively comfortable to fire sans ear plugs on both the 6.5 Creedmoor chambered LRP and the .308 WIN chambered SPR.

While I had the SPR in a rest, I hooked up a MagnetoSpeed chronograph to the end to see if there was any change in muzzle velocity between silenced and bare muzzle. I found a ~10 fps drop in velocity with the can affixed. Without the silencer, a five shot string of the same Federal Gold Medal turned in an average velocity of 2629 fps with a SD of 10.7. With the Sandman S screwed to the end, a similar five shot string dropped to 2620 fps on average with a SD of 5.7. Fit, Finish, Build Quality * * * * *
The S model I tested clearly hadn’t been babied, something that Torrey from Capitol Armory confirmed. They’ve run this silencer on machine guns, 300 Win Mags, and everything else under the sun. It’s certainly scuffed and nicked, but built like a tank, and the CA crew indicates that they’ve never had any issues with the mounting system coming loose or breaking on their cans or their customers’.

Point of Impact Shift * * * * *
Given how heavy this silencer is, some point of impact shift is to be expected. However, I found that it was repeatable no matter how much I torqued down on the can. I swapped back and forth between this one and the L model multiple times and still had no issues engaging steel targets out to 600 yards.

Sound Suppression * * * * *
The Capitol Armory guys tested this silencer on a different day with a different 24″ .308 and got an average of 139.4 dB while I got an average of 143 dB. I questioned Torrey about this and he chalked most of it up to the environmental conditions that day. If you watch their video above, you’ll also see that their bare muzzle number was 161 dB while mine was 172.8. Across the board, the numbers just seemed to be higher. What I can tell you is that the sound on either a .308 or 6.5 Creedmoor was definitely tolerable without hearing protection, both as the shooter and as a spotter. I wouldn’t hesitate to take the Sandman out on a hunt while leaving my ear plugs behind.

Modularity * * * * *
While we’d all love to have the ability to own a silencer for each gun in the safe, the truth is that silencers are expensive and the paperwork and wait time make them onerous to acquire. So a silencer will be used across multiple guns and needs to be as versatile as possible. The S model from Dead Air has the ability to work on 5/8″-24 and 1/2″-28 threaded muzzles thanks to the quick detach brake system, and further sound moderation can be had on 5.56 guns thanks to the replaceable end cap with a smaller aperture that is available for $55.

Overall * * * * *
If you value rock solid lockup with hell and back durability, you’d be hard pressed to find a better platform than the Sandman series. If you’re looking for maximum sound suppression, the “S” model isn’t likely to make you as happy as the L model with a bit more length (and weight). If you value light weight over durability, then the Sandman series is going to leave you a bit disappointed. The S model is certainly short enough, but it’s a bit porky compared to the Titanium models on the market. Buyers looking for flyweight cans should certainly consider the Sandman Ti which is a few ounces lighter while being a bit longer. If weight doesn’t bother you that much, then the Dead Air Sandman S is a very versatile and stout silencer that should last as long as the rifles you put it on.