I had a quick schmooze with reps for the Jews for the Preservation of Firearms Ownership down at the Gun Rights Policy Conference in Orlando. A rep (who shall remain nameless) was quick to inform me that he wasn’t Jewish. I found that kind of odd. But hey, you don’t have to be Jewish to love Levy’s real Jewish Rye. Or appreciate the beauty that is Bar Rafaeli. Still, anyone who works to convert anti-gun Jews to the gun rights cause is OK with me. Only that wasn’t what he was doing . . .

The campaign du jour was Buster Bullet, a cartoon character created to counter high capacity magazine misegos and anti-hollow point tsuris. Which is funny, in a way, as Barnes Bullets promotes their Buster Bullets as “deep penetrating, bone crushing.” Not exactly the reasonable self-defense image the JPFO is trying to promote with Buster. Shame. If any group of gun rights advocates shouldn’t have to sugar coat the message that guns save lives, or play coy with their religious affiliation, it’s the JPFO. Let’s face it: Buster’s about as Jewish as Marisa Miller (who modeled for Ralph “Lipschitz” Lauren, ironically enough).

Don’t get me wrong: defending high-capacity magazines is a worthy cause; smacking the proverbial camel’s nose as it pokes under the tent is always a good idea. But high cap mag bans are an insignificant side issue compared to the life-or-death struggle to enable and encourage Americans (in general) and Jews (in specific) to exercise their Constitutionally protected right to keep and bear arms.

Not to put too fine a point on it (so to speak), Buster singularly fails to address the main problem that American pro-gun Jews face: anti-gun Jews. 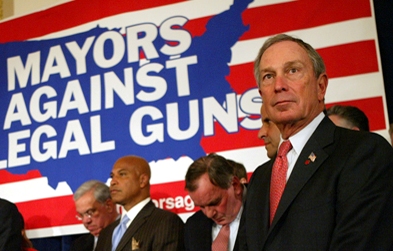 True story. While violent anti-Semitism is still a reality in modern America, firearms prohibition and restrictions are the larger danger behind the danger. A disarmed Jew is a defenseless Jew—no matter who’s trying to attack him or her. Or their family. Or their community.

haaretz.com reaffirms the phenomena and gives it their imprimatur:

Americans in general may be divided about gun control, but Jewish Americans are not. They have always been among the most enthusiastic advocates of legislation that will regulate gun ownership in a reasonable way. At the Million Mom March a dozen years ago, the largest gun-control demonstration in American history, Jews attended in droves . . .

American Jews are probably more conservative on economic policy and foreign policy than they were a generation ago, and there is some poll data to support this.  But—let’s tell the truth—the NRA supports the right of almost any terrorist suspect, wife-beater and crook to buy almost any weapon at almost any time, no questions asked.  And to Jews this just makes no sense.

What is the JPFO if not an NRA for Jews?

Unfortunately, the JPFO has given up trying to convert misguided Jews to the gun rights perspective. They consider it a lost cause. A waste of resources. Their organization is Jews for the Preservation of Firearms Ownership for all Americans. Not just or especially Jews.

I get that. Why beat your head against a wall? I also understand how American Jews act against their own self-interest: they can’t grasp the banality of evil.

Anti-gun Jews believe killers are “others”. They’re irrational/poorly educated/economically disadvantaged people “out there” (i.e. not Jews). Society must disarm, arrest and quarantine these outlier bad guys. The anti-gun Jews simply doesn’t see the pervasive potential evil—from government, criminals, anti-Semites, friends, even their own family—that’s all around them. And always will be.

Along those lines, you may recall I recently wondered if any 1930’s or 40’s-era German or European Jew died defending their right to keep and bear arms. Or, anyway, their guns. Why would they hand over their firearms? “I can understand it,” the rabbi (David Kenik) told me. “Who would have thought the Germans were going to exterminate all Jews? Jewish gun owners probably figured they could hand over their guns to this overwhelming force and survive. Think about 9/11 . . .

“Before 9/11, everyone thought the best way to stay alive was to go along with hijackers. After 9/11, they know better. They know that real evil exists. They know they have no choice: they have to fight for their lives to survive . . .

“If a passenger on a hijacked plane had a gun, do you think they would hand it to the hijackers?”

Of course, passengers can’t have a gun, thanks (in no small part) to the success of pro-gun control Jews. Which raises an important question: what part of the Holocaust don’t American Jews understand?