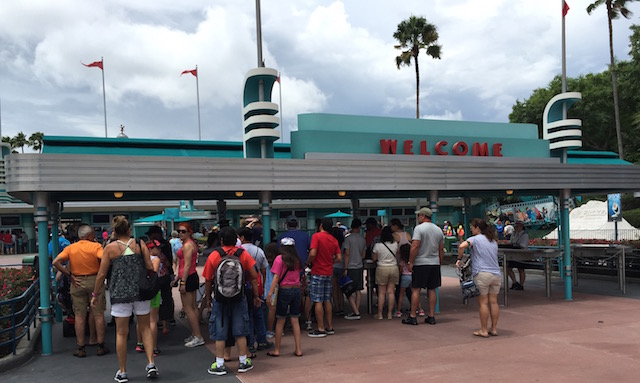 Upon entering Disney’s Hollywood Studio, “Joe” searched my backpack. There were three pockets in the front of the pack and several on either side. Joe didn’t open any of the pockets to examine any of their contents. Not good. This time of year the Disney entertainment industrial complex is wall-to-wall with shvitzing tourists, jammed in a huge confusing space with multiple choke points and no clearly marked exits. If a terrorist somehow smuggled explosives or firearms into the House of the Mouse and attacked Walt’s “guests” it would be a very bad thing indeed. Saying that . . .

I’m sure the Disney complex is under constant video surveillance, and that the people discreetly monitoring Disney’s customers know exactly what to look for in terms of lethal threats. (Disney’s staff training is generally superb.) I’d like to believe that the Disney Corporation has armed, highly trained security guards – hopefully including its own SWAT team – ready to emerge from the park’s underground tunnels and hidden bunkers to take care of business, should worst come to worst. Still, I don’t think it’s enough.

Ideally, Disney’s guests should have to go through the same security procedures that airline passengers endure before they board their flights: ID checks, metal and explosives detectors and x-ray bag exams. The park should also have clearly marked exits and posted evacuation routes. Easily identifiable security guards should patrol the park, as both a deterrent and a go-to resource for tourists who see something suspicious. The guards should be openly armed.

Garshk! as Goofy might say. That’ll scare everyone! Which is why you’ll never see openly armed guards at Disneyland – unless and until the unthinkable happens. And maybe not even then. Disneyworld depends on, is built on, Condition White. That blissful state of mind where people believe there is no danger whatsoever. The boats won’t sink. The food won’t poison you. The rides won’t kill you. The characters won’t attack you. Your kids won’t get lost. And you won’t die of heat prostration (though it certainly feels like it this time of year).

“I don’t want the public to see the world they live in while they’re in the Park,” Walt Disney once said. If any idea real-world dangers manage to pierce the veil, attendance falls. As it did after 9/11. If something bad happens in a park, as it sometimes does, Disney goes to great lengths to keep the incident on the DL. The Great and Powerful Oz running the seemingly seamless show must never be revealed as Oscar Zoroaster Phadrig Isaac Norman Henkle Emmannuel Ambroise Diggs from Omaha, Nebraska. If you know what I mean.

To maintain the illusion that the park is a place where nothing bad ever happens, the company deliberately positions Walt Disney as, well, God. To that end, the park now has posters with inspirational quotes from Uncle Walt. As you can imagine, none of these Disney commandments say “see something, say something” or “check your six” or “the answer to criminal aggression is retaliation.” It’s all about dreaming and doing and working together for a common goal through inevitable failures, without losing enthusiasm.

And that’s great. But I reckon it’s time for America to wake-up from its wonderful womb-like state of complacency, symbolized and personified by Walt Disney’s entertainment empire. While the terrorist threat is statistically insignificant, there’s nothing insignificant about the Islamofascists’ desire to drench itself in American blood. As 9/11 proved, we can no longer afford to believe that we are safe because Uncle Sam or Uncle Walt takes care of us. That’s a dangerous, elaborate illusion.

But one with infinite appeal. Who wouldn’t want to live – or at least visit – The Happiest Place on Earth? It reminds me of the Assassin’s oasis [via wikipedia.org]:

The tales of the fida’is‍ ’​ training collected from anti-Ismaili historians and orientalist writers were compounded and compiled in Marco Polo’s account, in which he described a “secret garden of paradise”. After being drugged, the Ismaili devotees were said to be taken to a paradise-like garden filled with attractive young maidens and beautiful plants in which these fida’is would awaken. Here, they were told by an “old” man that they were witnessing their place in Paradise and that should they wish to return to this garden permanently, they must serve the Nizari cause.

So maybe Disney World’s narcotic effect isn’t all bad, what with Walt’s distinctly American admonitions sinking into impressionable minds. Not to mention the fact that his utopian vision is based on the animator’s faith-based Republican belief system. Maybe the illusion refreshes our spirits and renews our faith in The American Way, so we can return to and cope with a world that’s not so nice. Even so, I wish I could have enjoyed Disneyworld with a gun in my pocket, just in case. Is that wrong?